The IMF’s latest staff report on China serves as a reminder of key vulnerabilities. With repressed real interest rates corporate leverage remains high and particularly so in state-owned enterprises. Shadow banking has exceeded 50% of GDP and is still growing. Economic growth and credit quality are exposed to an unbalanced real estate sector. And the augmented fiscal deficit is already close to 7.5% of GDP, due mainly to local governments’ net borrowing through financing vehicles.

The below are excepts from the IMF China country report. Cursive text and emphasis has been added.

“Overall corporate debt has increased from 92% of GDP (average 2003–07) to about 110% of GDP in 2013. The level is among the highest in the region. Among listed companies…a significant part of the increase in corporate debt after the global financial crisis concentrated in a few large firms in real estate and construction.”

“The build-up of leverage is concentrated in a ‘fat tail’ of firms. The top 50 firms of some 2000 firms accounted for nearly half of the total liabilities of listed firms, a rise of over 20 percentage points of total corporate liabilities over the last decade. Most of the increase was in the real estate and construction sector where about 80 percent of total liabilities of the sector belong to about 60 firms with leverage ratios higher than 300 percent. Highly leveraged local SOEs [state-owned enterprises] in mining and utilities also increased their borrowing significantly.”

“Profitability of SOEs, however, has remained stagnant over the last decade. The profitability of low-leveraged firms exceeded that of high-leveraged firms by a margin of 2‒2½ percentage points… Effective interest rates do not seem to reflect the underlying risk profile of listed firms as real estate and construction firms, with higher leverage, enjoyed much lower interest rate levels after the global financial crisis.”

“Shadow banking in China…is comprised of trust loans, bankers acceptances, entrusted loans (corporate-to-corporate lending administered by a bank), and interbank corporate bonds. As such, it includes direct credit extension by banks off-balance sheet and by nonbank financial institutions, especially trust companies and securities firms. After bank lending conditions were tightened following the 2009–10 credit boom, the shadow banking system took off. By March 2014, the stock of shadow banking had risen to nearly 53 percent of GDP, with annual growth rates averaging around 30 percent during 2012-13. China’s shadow banking activities typically involve direct lending to the real sector and are often closely tied to commercial banks. For example, trusts rely on banks for funding, banks are also allowed to hold controlling shares in trust companies, and entrusted loans also are administered by banks.”

“Shadow banking assets, including those funded by WMPs, may be of lower quality (such as claims on highly leveraged local government financing vehicles or real estate firms). Shadow banking also involves maturity transformation, using lengthened intermediation chains that run through the interbank market. This reliance on short maturities to fund lending for long-term projects could contribute to spikes in liquidity demand and volatility in the interbank market.”

“Wealth management products (WMPs), deposit-like instruments used to fund parts of shadow banking, have grown rapidly and risen to over 10% of GDP. Notwithstanding safeguards such as minimum investment thresholds and risk disclosures, investors may believe that WMPs are implicitly guaranteed. As such, even though in principle the risk is transferred to the investor, in practice many investors are unlikely to undertake adequate due diligence on the underlying assets in the WMP. Moreover, losses on fixed-income WMPs are almost unheard of, exacerbating this risk.”

“The real estate market… together with construction…directly accounted for 15 percent of 2012 GDP, a quarter of fixed-asset investment, 14 percent of total urban employment, and round 20 percent of bank loans. In addition, the sector has close links to several upstream and downstream industries. Local governments rely on land sales—closely linked to activity in the sector—as an important source of funding and real estate is extensively used as collateral for corporate sector borrowing.”

“Recent data suggest that several regions are in oversupply. Residential real estate inventories have increased sharply in Tier III and IV cities, as well as in the industrial Northeast (including Shenyang and Changchun) and parts of the Coast (including Hangzhou, Dalian, Fuzhou and Wenzhou). Commercial real estate, meanwhile, appears to be in oversupply across most regions.”

“Distortions weigh heavily on the property market. On the supply-side, the market is distorted by local governments’ reliance on land sales to finance spending. This helps explain the over-supply in many Tier III/IV cities. On the demand side, the market is prone to speculation since housing is an attractive investment given low deposit rates, a lack of alternative financial assets, capital account restrictions, and a history of robust capital gains.” 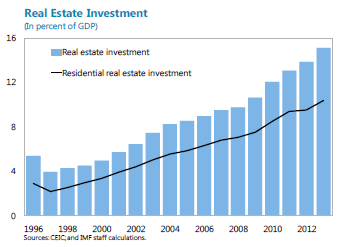 “Local governments were at the front lines of the post-GFC [great financial crisis] stimulus, supporting activity through a considerable rise in investment. Such investment, which has generally been financed off-budget through LGFVs [local government financing vehicles], has remained large and, unless rationalized going forward, would put increasing strains on local government finances and pose risks to financial stability and growth.”

“[Over and above net borrowing] many local governments rely on net revenue from land sales to finance large public infrastructure investment…Aggregate gross land sale revenue was sizeable at about 7% of GDP in 2013. Net land sale revenue was 2.5-3% of GDP after accounting for expenses related to city construction, land development, and compensation for relocation. Land sales could slow considerably if real estate development cools.”

“Augmented debt covers central and local government liabilities and quasi-fiscal activity by LGFVs, but excludes the debt issued for China Railway Corporation…[to give an estimate of 53.7% of GDP for the end of 2013].” 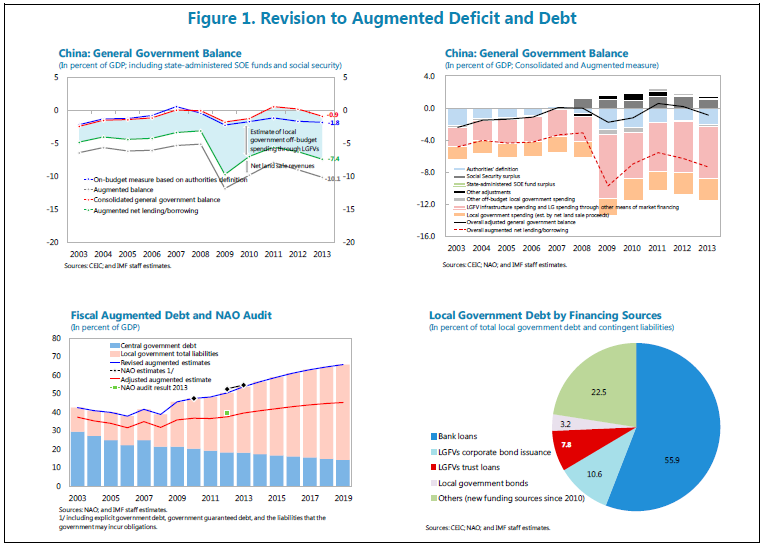