A new Standard Chartered Research Report investigates pockets of potential credit risk in Asia, by using a new comprehensive set of metrics. China’s overleveraged corporates are at the forefront of concerns, as mentioned in other posts (view here). Japan’s massive 400% debt-to-GDP ratio is a potentially large risk if real interest rates in the country ever increase. India is burdened with a high government debt ratio and an apparently deteriorating profile of corporate debt.

“Virtually all financial crises ultimately trace back to leverage – either unsustainably high leverage levels, or excessive growth in debt and the attendant problems of asset bubbles and resource misallocation, which eventually trigger a cycle of default, liquidation and asset price deflation… An IMF paper [1, reference below] reviewing 99 credit examples globally since 1960 concluded that 70% of ‘credit booms’ in emerging Asian economies ended ‘abruptly’, i.e., in crises. Other IMF work has found that a rise in the ratio of private-sector credit to GDP is a significant predictor of future financial system distress [2].”
“We synthesise a new BIS database with bottom-up corporate credit metrics and other information into a map of leverage and solvency at the sector (household, corporate and government) level. We can now combine borrowings, borrower cash flows, interest rates and repayment tenor into new solvency metrics, most notably debt service ratios…This study extends beyond the standard „total debt-to-GDP‟ analysis to take a more granular view of leverage and solvency across corporate, household and government sectors in Asia.” 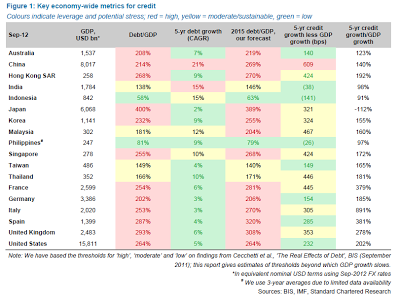 “China’s leverage is broadly the most worrisome in the region, as widely understood. However, the concern arises not from its overall credit-to-GDP ratio of 214%, which places it only fifth among the Asian countries in our study. Rather, the concern is that debt is heavily concentrated in the non-financial corporate sector [which is 117% of GDP]. This is despite the reclassification of local government investment vehicle (LGIV) debt as government debt. The pace of credit growth is also worrying. Total credit has grown 22% a year in the past five years, 6%-points faster than China’s nominal GDP growth, which is the highest in the region…problem loans are likely to surface and some banks may have to be recapitalised. But unlike most other major economies today, China has sufficient financial means to inject capital and restructure its problem lenders.”
“We have constructed solvency analyses at the individual company level for a universe of approximately 9,000 private non-financial listed corporations… While this coverage is by no means comprehensive, we suspect that a database limited to publicly listed firms fairly represents relative leverage across countries and, more importantly, trends over time… [The figure below] below presents the median and highest-quintile debt/equity ratios across [companies in] eight Asian markets as of Q3-2012…The corporates with the highest leverage are weakest in China (and India).

“Leverage is also growing rapidly in ‘shadow banking’, a huge and complicated new sector of the financial system. The term ‘shadow banking’ refers to bank-like activities (deposit-taking, extending loans) carried out by institutions that are not regulated like banks. Trust companies are the core of the system, but entrustment lending (inter-corporate lending) is also included… Given the lack of detailed information available, it is difficult to form a judgment on how large the credit risk is. It is possible that some of the new credit growth in the shadow banking system is being used to plaster over non-performing credits (with interest being added to principal). It is impossible to calculate how much of this ‘evergreening’ of bad loans is going on, and how much unpaid interest is being „paid‟ via new loans.”
On India
“We place India in the „moderate risk‟ category for overall leverage-related risk at the macro level. However, we are concerned about growing leverage in the corporate sector.” 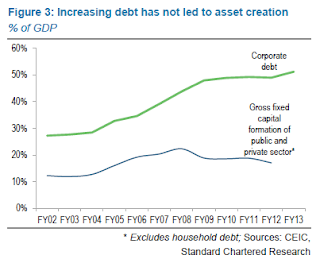 On Japan
“Japan stands out in terms of its total debt-to-GDP ratio, which at 400% of GDP is far higher than in any other country. Recent dynamics do not yet suggest that problems are building in the system. The question is whether the stakes have been raised since the implementation of Abenomics, which may leave Japan more vulnerable to future leverage-related problems. Even a small rise in JGB yields could lead to an unsustainable debt path for Japan…. The IMF estimates that an increase of 100bps in average yields would raise debt servicing costs by an additional 2% of GDP. A JGB bond shock could also lead to capital losses for principal creditors, Japanese banks and pension funds.”
“Japan’s rising public debt ratio reflects a combination of declining nominal GDP, lower government revenue, increasing fiscal stimulus and automatic stabilisers. Low economic growth has eroded government revenue, while fiscal stimulus has been required to boost the economy; both have taken a toll on the country’s fiscal position. Demographic changes put further pressure on the country’s fiscal health, as the ageing population requires more social security spending. Social security spending, the largest component of government expenditure, rose to 27.8% of total spending in FY12 (year ended 31 March 2013) from 19.8% in FY01.”
On Korea
“Korea has highly indebted household and corporate sectors. The [debt service ratio to income] of 24% for the private non-financial sector is particularly high. The rapid build-up of debt in the aftermath of the Asian crisis helped to boost GDP growth to an average of 7.7% (in real terms) between 1999 and 2002, but left a legacy of debt that is still being dealt with. Korea has managed to avoid a hard landing since 2003 and has proactively used macro-prudential policies to limit overall leverage, particularly external debt vulnerability.”
On a more positive note
“This report uses new indicators not just to highlight risks, but also to identify areas of future strength in the region. The household sectors in China, India and Indonesia all have room to use leverage to achieve faster and more resilient growth given their currently low levels of leverage. Our analysis is timed just as Asia ex Japan’s overall credit-to-GDP ratio reaches a similar level to the world average.”
References
[1] Selim Elekdag and Yiqun Wu, „Rapid credit growth: Boon or boom-bust?‟, IMF Working Paper WP/11/241 (October 2011)
[2] Reinout de Bock and Alexander Demyanets, „Bank asset quality in emerging markets: Determinants and spillovers,‟ IMF Working Paper WP/12/71 (March 2012)