In an easily readable working paper Stephen Cecchetti and colleagues explain the connection between euro area break-up concerns, Target2 balances, and financial conditions. This research would support the idea that commitment to 100% euro zone stability, via OMT and other measures, is the most effective form of monetary easing in the euro area.

“In this context the Eurosystem full allotment refinancing operations should be seen as financing the reversal of an outstanding stock of cross-border claims while the TARGET2 payments system merely records the results.” The difference between a euro area between residents to two countries with and without a functioning interbank market is illustrated by the graphs below: 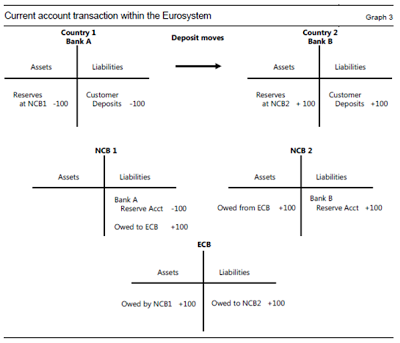 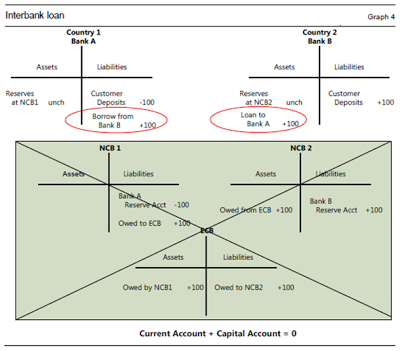 “With the onset of the crisis, interbank borrowing became increasingly difficult. It was at this point that the ECB began its full allotment refinancing operations. With full allotment, Bank A could count on being able to replenish its reserve shortfall by going to the central bank for funds over a given term. Bank A’s participation in the refinancing operation changes the two NCBs’ balance sheets, and also the ECB’s balance sheet. And, TARGET2 balances do the job previously done by the interbank capital flow and the capital account. With the current operational framework of the Eurosystem, with full-allotment refinancing and given collateral rules, the official settlements balance with automatically be equal to the sum of the current and capital account balances between two countries.” 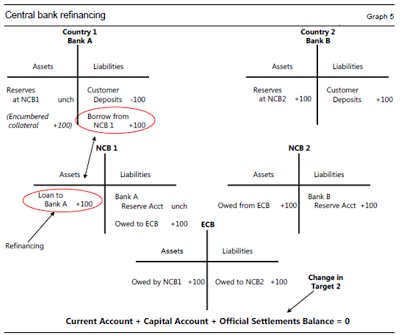 The importance of capital account versus current account adjustments is illustrated by the stock of German banks’ claims on peripheral Europe, which has fallen by roughly one half since their pre-Lehman peak, from just under EUR600 billion to EUR300 billion. 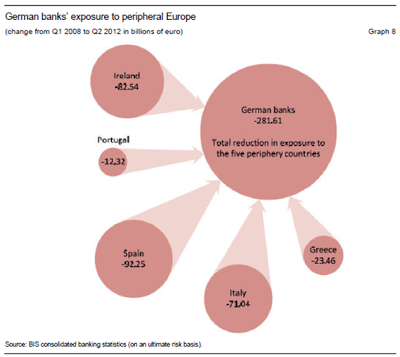 “But also UK banks were cutting their exposure in the periphery and were increasing their net local positioning in Germany. In the first quarter of 2012, UK banks increased their claims on the German public sector, which includes both claims on the government and on the Bundesbank, by almost EUR100 bn. Whether UK banks have shifted euros from their operations in Spain, in Portugal or in France, or from all of them, the resulting increase in the TARGET2 balance reflects neither current account financing nor a reduction of pure credit exposures to borrowers in peripheral Europe. Putting together company reports, central bank reports and BIS data, it is clear that a substantial part of the increase in Germany’s TARGET2 balance in 2012 resulted from international banks re-arranging their balance sheets to hedge the risk of redenomination, the possibility of a re-emergence of national currencies.”