A short Bundesbank paper presents evidence that the Federal Reserve, the ECB, and the Bank of England have long used policy rates to stabilize financial markets in times of distress. This would suggest that implicit ‘central bank puts’ are not new and that central banks’ tendency to stabilize markets in the past has not prevented serious market dislocations.

“This paper… empirically analyzes whether central banks take asset price volatility into account…In contrast to all of the previous studies our study looks simultaneously at the most important central banks [the Bank of England, the Federal Reserve Bank, the Bank of Japan and the European Central Bank] in a unified empirical framework. Our results suggest that the Bank of England, the Federal Reserve Bank and the European Central Bank systematically respond to an increase of the implicit volatility by a decrease in the interest rate. We take our results as strong evidence that central banks use interest rates to stabilize financial markets in periods of financial market stress.”

“Even before the financial crises 2007-2009 started there has been a heated debate whether or not central banks should respond to asset price developments. Proponents of a ‘leaning against’ approach argue that a central bank is able to (and then also should) actively counteract excessive asset price increases while advocates of the ‘cleaning-up’ approach are convinced that the central bank should rather ‘mop up’ the negative macroeconomic effects after the burst of a bubble.”

“To estimate the interest rate reaction function [modeling short term rates in dependence of expected inflation, growth, and equity market volatility] we apply monthly data up to December 2009 [thereafter policy rates were almost stable]. The start of the sample period differs among the central banks due to data availability and we use the following short-term interest rates as the central banks’ instruments: European Central Bank (European Overnight Index Average, EONIA since 1999); Federal Reserve Bank (Federal Funds Rate since 1990); Bank of England (Overnight Interbank Rate since 2000); Bank of Japan (Uncollateralized Overnight Call Rate since 2001).”

“To account for the forward-looking nature and to accurately approximate central banks’ information set, we apply inflation and growth expectations which are publicly available in a forecast poll by Consensus Economics…Implied volatilities are calculated in a forward looking manner and, thus, can be interpreted as expected future volatility of the underlying asset. Hence, all variables which enter our central bank reaction function are forward-looking and available to the central bank in real-time.” 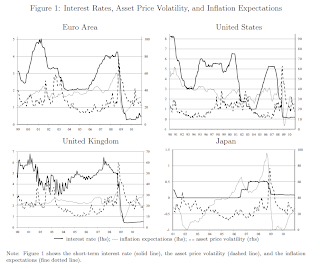