Chinese commodity financing deals exemplify how regulation and circumvention can distort more than one major market. These transactions have been a means for circumventing capital controls and facilitated short USD-CNY carry trades. Thereby they generated capital inflows into China, and distorted demand for physical metals (particularly copper) vis-a-vis futures. As China’s State Administration of Foreign Exchange (SAFE) has issued new regulation to curb these transactions, rapid unwinding might cause reverse distortions. 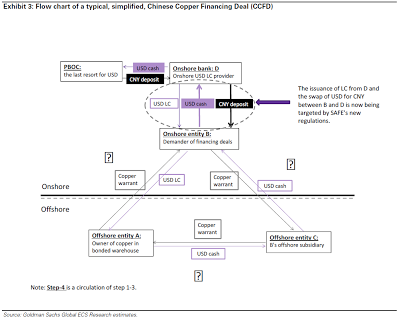 “Through the whole process each tonne of copper involved in CCFDs is hedged by selling futures on LME futures curve (deals typically involve a long physical position and short futures position over the life of the CCFDs). Though typically owned and hedged by Party A, the hedger can be Party A, B, C and D, depending on the ownership of the copper warrant.”

The size at stake

“Chinese ‘financing deals’… likely…contribute to China’s FX inflows. For CCFDs, the immediate cross-border conversion of FX to onshore CNY after Party C pays Party B for the copper warrant (Step 2) directly contributes to China’s FX inflows. In terms of outflows, the issuance of letter-of-credit (FX short-term lending) by Party D to Party A (Step 1) is not associated FX outflow by definition, and when the letter-of-credits expire they tend to be rolled forward. Step 3 occurs offshore, so there is flow related to this transaction. In this way, the net Chinese FX inflows/outflows associated with CCFDs are equivalent to the change in the value of the notional letter-of-credits.” 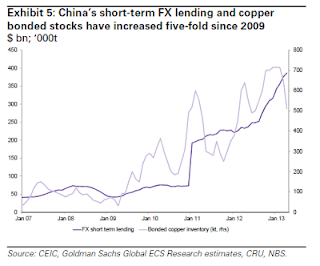 “With the notional value of ‘financing deals’ far exceeding the export/import value of the commodities used, and likely significantly contributing to the recent run-up in China’s short-term FX lending (and related upward pressure on the CNY), China’s State Administration of Foreign Exchange (SAFE) announced new regulations to address these issues (May 5), to be implemented in June…The new policies are in our view likely to bring to an end to these financing deals.”

“The new regulations can be split into two parts, and broadly summarised as follows:

The second measure targets…trade firms’ by identifying any activities that mainly result in FX inflows above normal export/import backed activities…This measure would force entities to curb their balance sheets if they are found to be involved in such activities.”

“A complete unwind of CCFDs would likely be bearish for copper prices as the copper used to unlock the interest rate differential shifts from being a positive return/carry asset to a negative carry asset.”