A University of York paper suggests that equity strategies based on fundamentals and strategies based on momentum are complementary. Thus, relative momentum seems to be a useful overlay for earnings growth-oriented portfolios (probably detecting when high growth companies hit a snag). And trend following has historically reduced volatility and drawdowns of both value and growth strategies.

1. Value
“Metrics for individual stocks that help to identify value stocks have included dividend yield, total payout yield, and price-to-cashflow… the most widely known measure of value is a stock’s book-to-market ratio.”
According to MSCI, attributes for defining value stocks are [i] the book value to price ratio, [ii] the 12-month forward earnings to price ratio, and [iii] the dividend yield of a stock.

3. Relative momentum
“[A popular strategy in the equity space is] cross-sectional, or relative momentum, where portfolios are generally formed with a fixed amount of long and short positions each month irrespective of how the aggregate market is performing…An adjustment to this strategy…involves volatility-adjusting the past return to avoid the most volatile assets appearing disproportionately often in high and low momentum categories.”

4. Trend following
“The second type of momentum strategy… has been widely known as ‘trend following’ and is an approach frequently used by Commodity Trading Advisors (CTAs). In this type…one is interested in the absolute direction of an asset’s price rather than how one asset has performed relative to another. This could be based on whether the asset has shown a positive excess return over the past 12-months,, whether the excess return has been positive over a range of time frames, or whether the current price is in excess of a moving average, or on other similar metrics.”

“In this paper we… explore the interaction between value and growth investing on the one hand and both absolute and relative momentum on the other… we apply our analysis to MSCI indices of value and growth for both developed economy and emerging economy stock markets.”

“This study utilizes MSCI Value and Growth equity indices for 23 developed and 21 emerging countries… The developed economy indices begin in December 1974, while the emerging market indices start in December 1996 [with exceptions]. [The sample period goes to 2012].”

“Any investor…in an equally weighted portfolio of the indices would have experienced significant drawdowns over the sample period, with returns being both volatile and negatively skewed.”

“[Our research] confirms the conventional finding that value stocks tends to outperform growth stocks across all periods and in the case of both developed and emerging markets. Returns are typically 2-3% higher per year for value indices while volatilities are fairly similar for both strategies…The outperformance of value stocks over growth stocks has been a well-documented phenomenon in the finance literature. When we create portfolios using the relative momentum filter we find that returns are enhanced by the filter. However, the drawdowns, the high volatility in returns and negative skewness remain as a feature of the performance.” 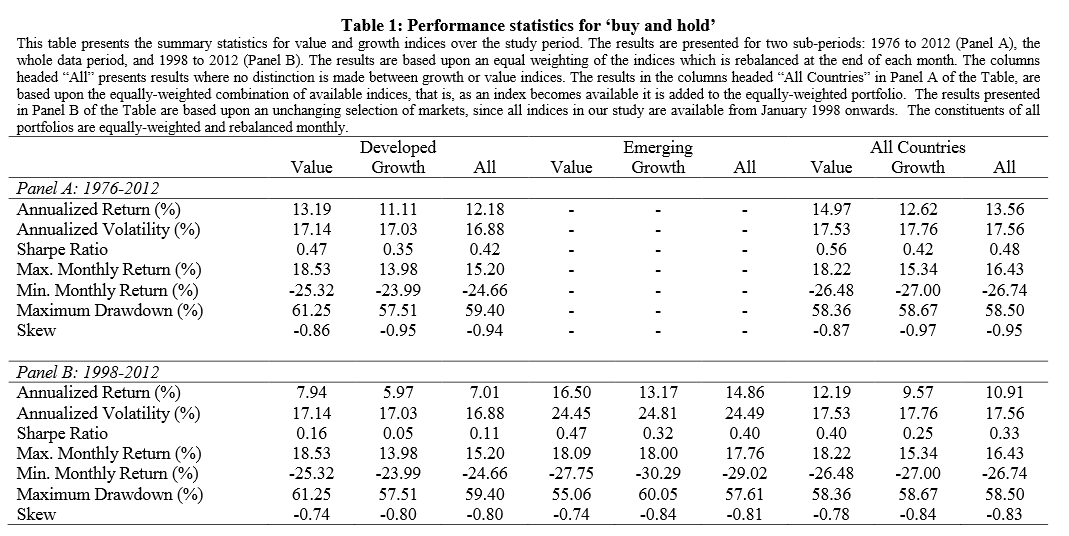 “The most significant aspect of our results however, relates to the way in which the relative momentum and trend following filters affects the value and growth portfolios… 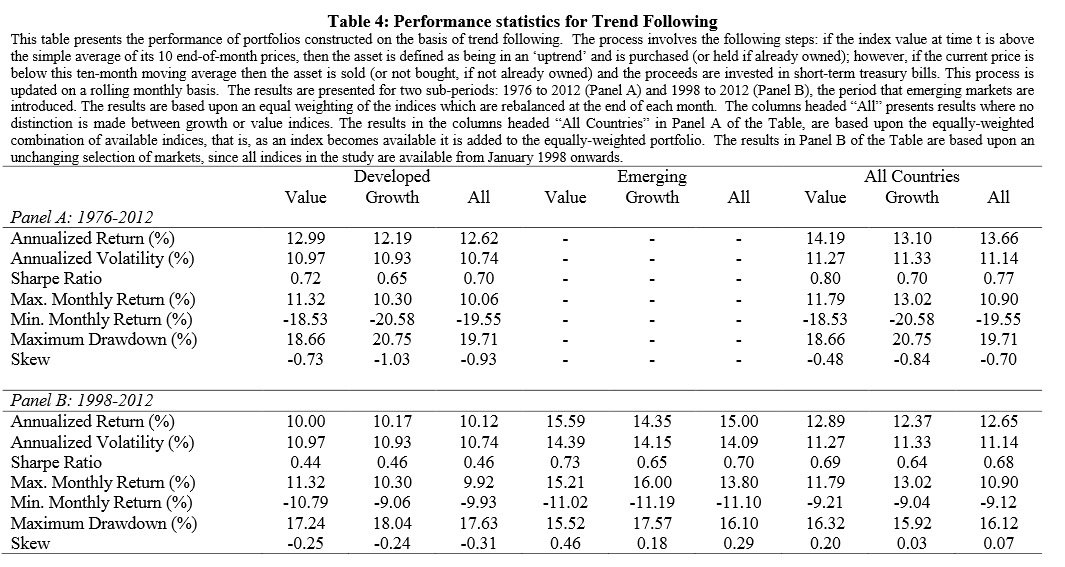 “We find that in many cases the risk-adjusted outperformance of value over growth investing disappears, particular when the trend following filter is used and, in some cases, the performance advantage actually reverses.”

A thought on the interaction of investment styles

“While value and momentum are well established investment strategies, there has been less attention focused on the interaction between the two. For a stock to become cheap on a value metric it needs the fundamentals to improve relative to the price. In the case of an earnings yield (E/P) approach, this means that E needs to increase (decrease) at a faster (slower) rate than P rises (falls). …[This also implies that in case of large price shocks the two metrics usually move in opposite directions]…In the cases where P falls this makes it less likely the stock will qualify as a cross-sectional momentum winner and almost certainly rules it out from having positive absolute momentum.”