Risk parity portfolios allocate equal risk budgets to different assets or asset classes, most frequently equities and bonds. Over the past 30 years these strategies have outperformed traditional portfolios and become vastly popular. But a recent Commerzbank paper shows that outperformance does not hold for a very long (80 year) horizon, neither in terms of absolute returns, nor Sharpe ratios. In particular risk parity seems to be performing poorly in an environment of rising bond yields. And levered risk parity portfolios (“long-long trades”) are subject to considerable tail risk.

The below are excerpts from the report. Cursive lines and emphasis has been added.

“[Risk parity] seeks to equally allocate risk budgets [across assets or asset classes]. This is accomplished by using forecasts or historical values of asset volatilities. In contrast to the traditional mean-variance framework explained above, risk parity does not require the input of expected returns. Risk parity usually generates a portfolio that is much closer to the tangency portfolio [the optimal portfolio from a risk-return angle] than for example a 50/50 equity/bond portfolio or a 60/40 equity/bond portfolio. As such, the risk-parity portfolio generally demonstrates a better risk-adjusted performance, i.e. a higher Sharpe ratio, than its traditional counterparts…The lower the correlation between the assets the higher the expected excess return of the levered risk parity portfolio over the traditional alternative.” 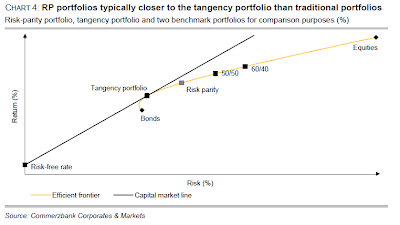 What is the empirical evidence of performance?

“Results in academic and practitioners’ studies mainly confirm…that risk parity generates attractive risk-adjusted returns but lower total returns. Yet in order to demonstrate this, the lion’s share of these studies employ data either from the beginning of the 1980s until today or even data only from the last decade.”

“Analyzing return data from the last 80 years, we show that unlevered risk parity generated neither better Sharpe ratios nor a better total return in the long run than more traditional asset allocation methods…For the purpose of the simple two-asset portfolio analysis, we construct an equally weighted US Treasury total return index representing the US fixed income market, and use the S&P 500 total return index as the representative of the US equity market. Monthly return data starts in 1934 and extends until June 2013, thus our sample comprises eighty years of data… Since the 1980s, in particular levered risk parity has benefited from the decline of bond yields and, since 2000, from the weak performance of equities and the strongly negative correlation of equity and bond returns as well. However, it delivered inferior results between 1949 and 1981.”

“[However if] leverage to risk parity is introduced such that the portfolio volatility is approximately equal to the volatility of a benchmark portfolio…the strategy’s total return was considerably higher than the 60/40 portfolio at a comparable level of volatility. As such, the Sharpe ratio stands higher, driven by the dynamic approach to leverage.”

What are the fundamental drawbacks of risk parity?

“Our analysis reveals the following main shortcomings of risk-parity approaches:

“From August 1949 until October 1981, yields were more or less constantly rising while the relative performance of risk parity compared to a 60/40 portfolio was disastrous. On the other hand, since then, yields have been on a declining path and risk parity outperformed more equity-dominated portfolios.” 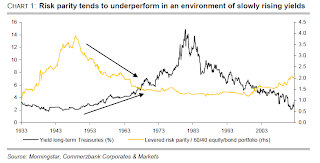