A research report by Jens Nordvig and his colleagues at Nomura shows that external (current account) surpluses have been a poor indicator of currency performance over the past 20 years. External deficits are often the consequence of growth outperformance, decreasing country risk premiums and capital inflows, and hence may be associated with currency strength rather than currency weakness.

The below are excerpts from the report, which is proprietary research of Nomura. Emphasis and cursive lines have been added. For access to the original report please see www.nomuranow.com/research and request access. 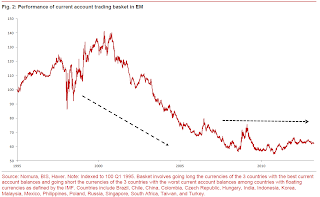 “The carry differential in the portfolio…strongly favors the countries with weak current accounts and thereby drives a lot of the negative performance of the current account basket.”

“We do find however that, in EM space as in DM, there does seem to be added benefit of conditioning a strategy based on current account strength on economic growth as well. EM currencies also appear to be different in that they are more sensitive to market volatility, and that there is marked outperformance in our strategy based on current account imbalances in periods of high volatility relative to low volatility.”