“During the 2000s, many EM governments became able to issue – and to sell to non-residents – long-term debt denominated in their own currency rather than in dollars…[and] avoided the currency mismatch risks created by heavy dollar borrowing in previous decades…The proportion of government debt denominated in local currency now dwarfs that of denominated in foreign currency… World Bank estimates put total local currency debt – that is, private as well as government – in the emerging markets by the end of 2012, at USD9.1 trillion, compared with USD4.9 trillion at the end of 2008.” 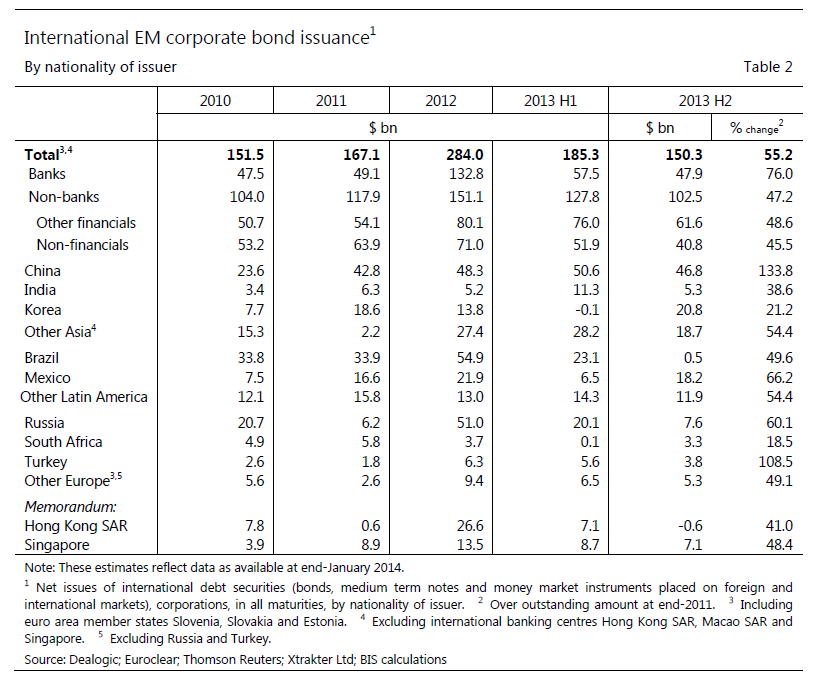 “Issuance by EM non-bank corporations on such a scale, and a possible “stop” at some point in the future, could affect the domestic banking systems in EMEs through at least three channels…

“The global long-term interest rate now matters much more for the monetary policy choices facing emerging market economies than a decade ago. The low or negative term premium in the yield curve in the advanced economies from mid-2010 has pushed international investors into EM local bond markets: by lowering local long rates, this has considerably eased monetary conditions in the emerging markets…These developments strengthen the feedback effects between bond and foreign exchange markets. They also have significant implications for local banking systems.”

“Expectations about the exchange rate and the long-term interest rate are often jointly determined: expectations of currency depreciation, for instance, may also drive down the prices of local currency bonds. Such joint determination will be particularly evident after financial shocks – domestic or foreign. Graph 3 shows a simple average of movements in bond yields and in the exchange rate of several major EM economies. Long-term interest rates in major EM economies fell during 2011 and 2012. Then the FOMC statement of 1 May 2013 led bond markets worldwide to fall. Market volatility rose sharply. There was also a near simultaneous decline in the exchange rate of many EM currencies against the dollar.” 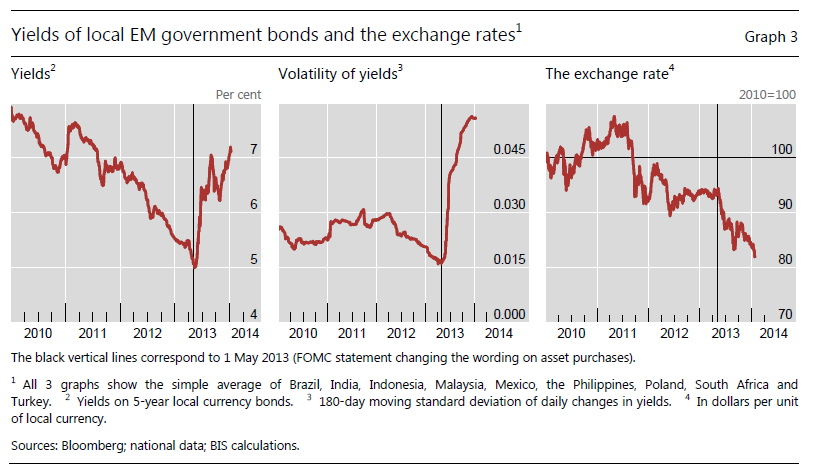 “Without capital controls, and assuming the country’s credit standing is constant, the long-term rate in the local currency will be heavily influenced by developments in dollar bond markets. There is a loss of independence irrespective of the country’s choice of exchange rate regime.”