The IMF, like other institutions, estimates that China’s fiscal position is much weaker than suggested by headline statistics. A new paper sees the augmented fiscal debt at around to 45% of GDP and the augmented fiscal deficit at close to 10% of GDP. Financial stability risks arise from dependence on a favorable ratio of growth to real interest rates, the reliance of local budgets on real estate sales, and the refinancing of local government financing vehicles’ debt.

The below are excerpts from the papers. Cursive text and emphasis has been added.

“Infrastructure investment has become local governments’ main strategy to foster growth… Local governments, meanwhile, are for the most part prohibited from borrowing, at least through the budget…Local infrastructure spending has mainly been financed off-budget, either through land sales or Local Government Financing Vehicle (LGFV) borrowings… In simple terms, the local government would create a company that would then borrow from banks, trust companies, or the bond market.”

“Therefore, IMF staff have developed a new ‘augmented’ concept in an attempt to capture these off-budget fiscal activities, which expands the perimeter of the government to include off-budget and LGFV activity. LGFV are different from other state-owned enterprise (SOEs) as LGFVs are largely set up, owned, and operated by the local governments; they engage in economic activities that are fiscal in nature; and the government directly or indirectly shares the debt servicing responsibilities, and sometimes subsidizes their losses.” 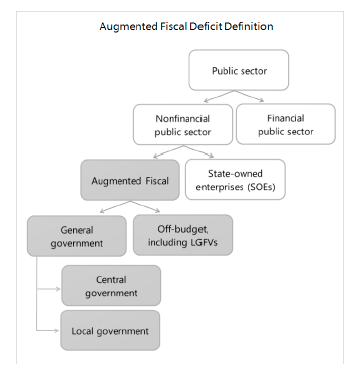 “Our estimate, of around 45 percent of GDP in 2012, is broadly in line with other estimates after adjusting for these differences. Focusing just on the overall figure, estimates tend to vary from just below 30 percent to above 70 percent of GDP… some include contingent liabilities (such as financial sector liabilities related to asset management companies or development banks) and debt of the Ministry of Railways, which was corporatized in 2013.” 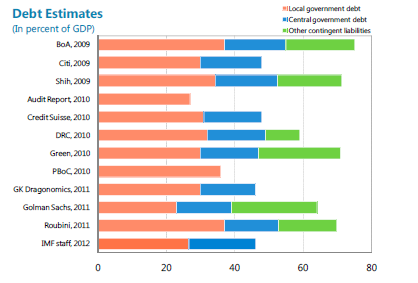 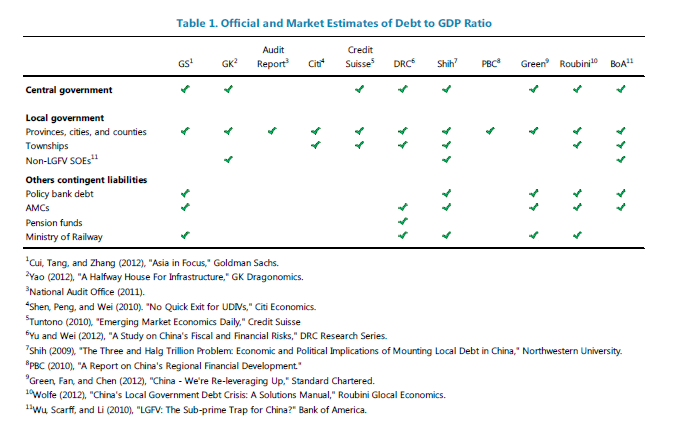 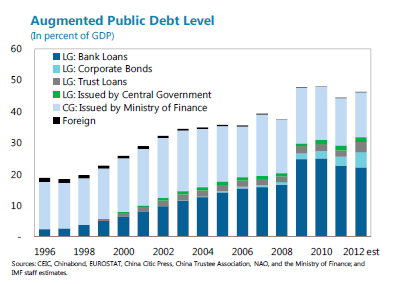 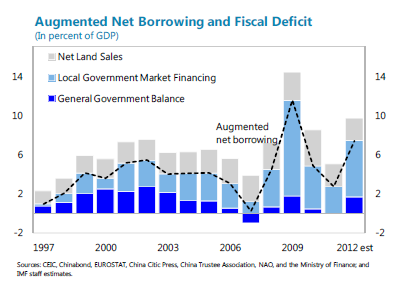 The importance of land sales

“China’s recourse to land sales is not unusual. Land is often a local government’s most valuable assets, making land sales a natural way to support urbanization. For example, Cairo, Istanbul, and Mumbai have raised significant revenue from land auctions. Some advanced economies such as the United States, Japan, and Korea also went through a similar process during their transition period.”

“Lands sales are a major source of risk for local government finances. First, local government’s reliance on land sales for financing could result in an over-supply of real estate that, in turn, may result in a market correction. A correction, moreover, could trigger a negative feedback loop. Local governments would have to cut spending as proceeds from land sales fell, at the same time that a decline in construction activity would already be hurting local fiscal revenue.” 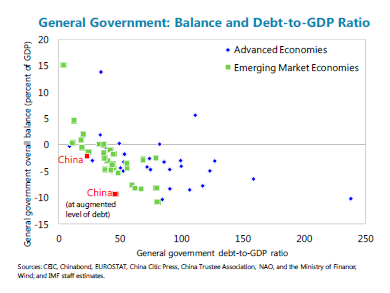 “Debt servicing is another potential source of vulnerability. LGFVs will need some combination of cash or financing to repay maturing debt. If refinancing, LGFVs could, depending on market conditions, have to pay higher interest rates.”