Shadow banking encompasses credit intermediation outside the regulated banking system, mostly through investment funds, money market funds, structured finance vehicles, broker-dealers, and finance companies. In parallel to the classical deposit-based funding of bank intermediation, the shadow banking system establishes secured transactions-based wholesale funding of non-bank intermediation. Thereby, the role of asset managers and off-balance vehicles of banks in intermediation has greatly increased, as has the importance of asset managers as source for “collateral mining. Regulators fear that shadow banking has been conducive to excessive leverage in the economy and contributed to systemic pressure through sudden stops and asset fire sales.

“The shadow banking system is the collection of financial entities, infrastructure and practices which support financial transactions that occur beyond the reach of existing state sanctioned monitoring and regulation. It can broadly be described as ‘credit intermediation involving entities and activities outside the regular banking system’. It includes entities such as hedge funds, money market funds and structured investment vehicles (SIVs). Investment banks may conduct much of their business in the shadow banking system (SBS), but they are not SBS institutions themselves…These activities can be largely traced back to the…originate-to-distribute banking model, which gave the possibility to transfer part of the balance sheet from the regulated to the unregulated part of the financial sector.”

“Relations between the regulated banking system and the shadow banking system may result in a substantial amplification of systemic risk. One of the elements for the US market, has been the ‘run on repos’ of shadow banking entities that were funded using asset-backed-securities as collateral. When the value of these assets declined dramatically, these entities, which could not access central bank liquidity, the shadow bank entities propagated contagion through market dynamics – liquidity squeeze, fire sales – or via the interconnectedness with the regulated banking sector. Shadow banking activities exacerbate the build-up of leverage and asset price bubbles and therefore amplify the procyclicality of the financial system.”

The institutional size of the shadow banking system

The largest sub-sector, representing USD19 trn and 35% of assets of non-bank financial institutions (NBFIs) in 2011, is investment funds other than money market funds (MMFs). This sub-sector is very diverse in its risk characteristics and includes equity funds, bond funds of varying degrees of credit risk, mixed funds as well as Exchange-Traded Funds (ETFs). Non-equity funds, which may include funds involved in credit intermediation and operating with some degree of maturity and/or liquidity transformation, would broadly correspond to USD9 trn or 17%.

Structured finance vehicles are the second largest identified sub-sector with USD5 trn of assets corresponding to 10% of NBFIs. It includes securitization vehicles, which are created for the purpose of warehousing assets and issuing securities backed by these assets.

Broker-dealers, finance companies, financial holding companies and MMFs are roughly of equal size, each representing 7% of total NBFIs and around $4 trillion in assets. The broker-dealer sector is essentially concentrated in the US (52%) and Japan (42%), which also reflects the fact that other jurisdictions with large financial sectors (e.g. the euro area, the UK) do not single out broker-dealers in their Flow of Funds statistics. The rest of the “shadow banking” sector is represented by jurisdiction-specific entities such as Dutch Special Financial Institutions (SFIs) and US Funding corporations, each at 4%-5% of total OFIs. Hedge funds only account for 0.4%.

“The repo market is a key source of financing for the shadow banking system. Most recent estimates of the size of the repo market in the US are in the range of USD 12 trn in and the repo market in the euro area at EUR 6.2 trillion…Secured lending via repos has been increasing significantly in the past recent years in detriment of unsecured forms of interbank lending in money markets. Indeed, the ECB estimates that since 2002 the daily turnover of the interbank secured lending more than doubled whereas the unsecured part of that marked decreased slightly.”

“Secured financing provides benefits over unsecured lending, especially during turbulent market times. At the same time, however, the reliance on secured financing provides a powerful channel of transmission of shocks in the financial system. The decline in collateral values translates in additional collateral calls possibly compounded by higher haircuts and margins requirements. A system in which financial institutions rely substantially on secured lending tends to be more pro-cyclical than otherwise.”

“Government bonds account for two third of the EU-originated collateral used in repo transactions. The powerful shock amplification system of these markets became particularly evident over the last couple of years with the loss in value of the debt of some euro area countries”

“In Europe, an increasing share of repos is cleared via central counterparty clearing houses (CCPs) – with a share of 32% of outstanding amounts in December 2011…CCPs’ share seems to be even larger, about 50% in the euro repo market, according to the ECB annual money market survey. CCPs increasingly interpose themselves between the original counterparties in repo market transactions, although this trend may reverse if counterparty risk would recede to pre-crisis levels. The rest of the euro repo market relies largely on bilateral trading, clearing and settlement modalities (about 40%) and, increasingly, on triparty repo which represents slightly more than 10% of the market. Triparty repo is certainly a dynamic segment which after the 2008 contraction shows again a growing trend.”

The broader funding structure of loans to non-banks

“Historically, term transformation and lending to non-banks has been the domain of banks and short-term funding thereof relied predominantly on non-financials’ deposits. In the past decade, however, the role of asset managers and off-balance vehicles of banks in intermediation has greatly increased, as has the importance of asset managers as source for “collateral mining”.

“Asset managers do not just invest long-term, but also have considerable money (more precisely, money-market instruments) holdings. Primarily these holdings result from securities borrowers’ posted cash, as collateral in securities lending operations. Beyond, asset managers hold money for liquidity management and in the context of derivate trading strategies. These money holdings imply massive volumes of reverse maturity transformation, whereby significant portions of long-term savings are transformed into short-term savings. This reverse maturity transformation occurs in spite of the long-term investment horizon of the households whose funds are being managed. This reverse maturity transformation is the dominant source of marginal demand for money-type instruments in the financial system.”

“Reverse maturity transformation gives rise to large, centrally managed cash pools within the asset management complex. In the aggregate, these cash pools account for over three quarters of the USD3.5 trn in institutional cash pools at end 2010 (see Pozsar, 2011). The traditional, deposit-funded banking system is not well fit to intermediate these large cash pools, since they are handled in an asset management context, they cannot earn zero interest. This precludes fully insured, but noninterest-bearing transaction account as an option in normal interest rate environments. Meanwhile interest-bearing deposits are insured for only a small fraction of cash pools, beyond which point they represent unsecured exposures to banks. Instead of M2-types of money, asset managers prefer publicly guaranteed debt (such as Treasury bills and agency discount notes) and private collateralized instruments such as repurchase agreements, asset-backed commercial paper and other asset-backed paper issued by the shadow banking system.
Modern banks straddle both the traditional and shadow banking systems and use both traditional (M2, for households and some corporations and market-based (non-M2) liabilities for their funding [as illustrated by the below graphic].” 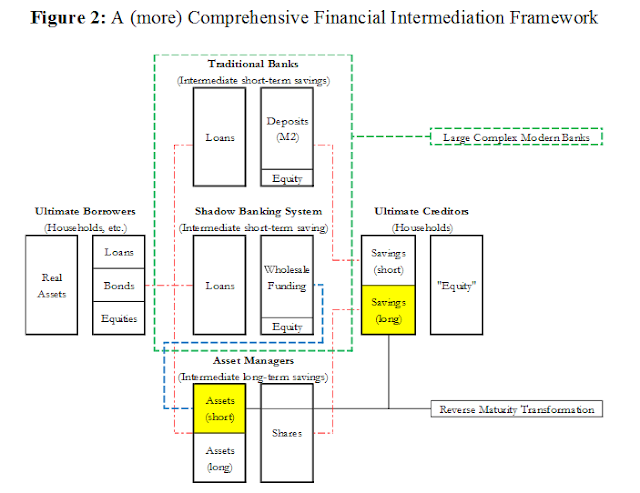 The provision of non-M2 type of moneys requires collateral, since users will not accept general claims. This, among other activities, makes the shadow banking system collateral-intensive. The ultimate sources of collateral in the shadow banking system are asset managers as well. Posznar and Singh (2011) estimate the total volume of collateral mined from ultimate sources (that is, from asset managers) at USD3.3 trn and USD2.4 trn at the end of 2007 and 2010 respectively. These totals reflect USD1.6trn and USD1.3 trn in hedge fund assets, and USD1.7 trn and USD1.1 tn in real money assets.

Source collateral accumulates on dealers’ central collateral desks where their re-use can also be determined. Source collateral can be re-used to meet demand for collateral from the “street”. This demand comes from the need to settle trades with other dealers, to post collateral for out-of-the-money OTC derivatives to other dealers, as well as to raise cash from institutional cash investors directly or indirectly through money funds. Thus, source collateral is collateral that can be re-pledged, creating dynamic collateral chains
The shadow banking system implies that even with M2 being stable, the banking system can leverage up, not necessarily by increased interbank lending, but because of the portfolio choices of the asset management complex. In turn the supply of privately guaranteed non-M2 liquid assets is by and large a function of the aggregate volume of institutional demand for short term claims.