Capital regulation reform requires banks to hold a much higher ratio of core capital to risk-weighted assets, taking some toll on lending and economic activity. An empirical analysis by the BIS suggests that the process is well under way. Mathematically, most of the adjustment has been achieved through retained earnings. However, in developed countries also lending spreads have increased, credit growth growth has slowed, trading assets have declined, and the share of higher risk-weighted assets has fallen.

“Banks and capital requirements: channels of adjustment”, Benjamin H Cohen and Michela Scatigna
BIS Working Papers No 443, March 2014
http://www.bis.org/publ/work443.htm
The below are excerpts from the paper. Emphasis and cursive text has been added.

What are banks’ options to increase capital ratios?

“Higher capital requirements were only one element of a range of financial regulatory reforms that have been put in place since the crisis [Link]…A bank that seeks to increase its risk-adjusted capital ratio has a number of options at its disposal:

What are the estimated costs of raising capital ratios?
“Some observers have expressed concern that if regulators and markets forced banks to build up capital too rapidly, this would impose considerable short-term macroeconomic costs by inducing banks to pull back from lending to finance investment…Most… studies used an approach that translated increases in bank capital into increases in lending spreads, and in some cases into changes in lending volumes. Spread and volume effects were typically estimated per percentage point of higher risk-weighted capital ratios [table 1 below]. Macroeconomic impacts were then derived by multiplying these effects by the number of percentage points by which capital ratios were expected to rise as a result of the reforms [table 2 below]. [Estimates range between a 5 bps reduction in economic growth over 4 years to a 30-60 basis points loss over 5 years.]” 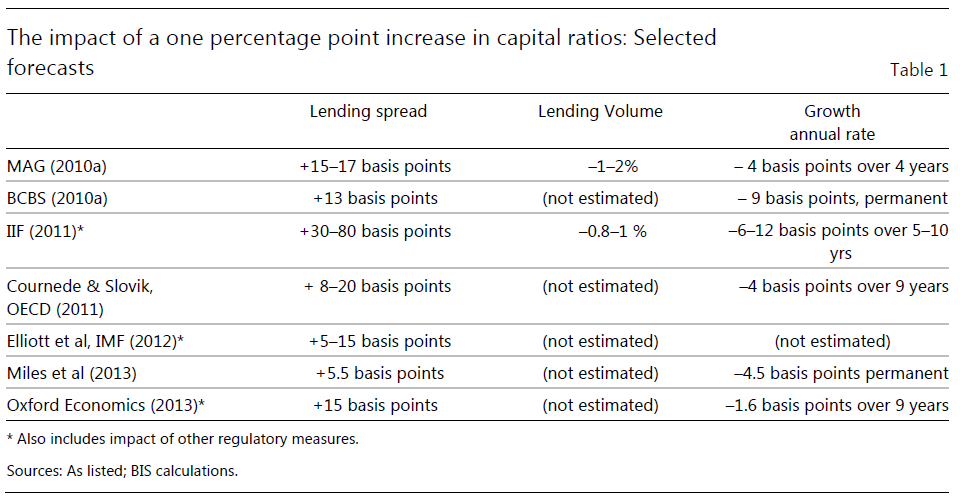 How much have capital ratios increased after 2008?

“A series of Quantitative Impact Studies (QIS) conducted by the Basel Committee on Banking Supervision offer evidence for a significant aggregate rise in banks’ capital ratios in recent years. The studies estimate average capital adequacy ratios for a global sample of banks according to the definitions that are scheduled to come into force in the Basel III framework. Weighted average capital ratios for large, internationally active banks have risen from 5.7% at the end of 2009 to 9.2% at end- 2012. Those for a sample of smaller banks have risen from 7.8% to 9.4% over the same period.”

“We have drawn data from the Bankscope database for a set of 94 banks. The sample was chosen so as to include as many significant institutions from the main global financial centres as possible, as well as banks from smaller centres and emerging economies.”

“In terms of weighted averages, using end-2012 total assets as weights, the banks in our sample increased their risk-weighted common equity capital ratio from 11.4% at end-2009 to 13.9% at end-2012…The increase in capital ratios from end-2009 to end-2012 in our sample, which equals 2.5 percentage points after rounding, is somewhat below the QIS finding of an increase of 3.5 percentage points over the same period for capital ratios using the fully phased in Basel III definitions…These discrepancies arise…[because] risk-weights for many asset classes are higher under Basel III than Basel II…A second factor is that regulatory capital is likely to be less than capital as reported on a bank’s balance sheet, because of deductions…for goodwill, securitisation positions, deferred tax assets and other items.”

How has the increase in capital ratios been achieved?

“The bulk of the adjustment has taken place through the accumulation of retained earnings, rather than through sharp adjustments in lending or asset growth…For the sample of 85 banks for which information was available..[and] when expressed in terms of percentage points of the risk-weighted capital ratio, retained earnings accounts for 2.5 out of the 3.9%-point increase in capital, while capital from other sources accounts for the remaining 1.4%points…The ability of banks to increase their capital by accumulating retained earnings did not result from especially strong improvements in profitability.”

“One of the predictions about the impact of the transition to higher bank capital ratios – wider lending spreads – appears to be confirmed, though the widening was rather mild. Net interest income rose from 1.37% of assets to 1.67% for the full sample. This 30-basis point increase in the spread between banks’ gross interest earnings and their funding costs works out to 12 basis points per percentage point of increase in the capital ratio.”

“The advanced-economy banks in the sample increased their assets by 8% from 2009 to 2012, while the emerging-economy banks increased assets by 47%…However, for European banks, lending growth lagged behind asset growth. The average European bank increased gross lending slightly (by 1%), but European banks as a whole reduced their gross lending by 9.5%…The evidence suggests that while many banks did reduce their stock of trading assets, especially in Europe, others maintained or increased them, particularly in the US and emerging economies….Advanced economy banks on average reduced their stock of trading securities, with a weighted average reduction of about 3% from 2009 to 2012 and an overall reduction of 19% during this time.”