(The below are excerpts from the paper)

Low policy rates in key currencies leads to policy rate setting in the rest of the world that is easy in the sense of keeping policy interest rates lower than those indicated by Taylor rules… controlling for domestic inflation, output gaps and the nominal effective exchange rate, foreign interest rates have a substantial if uneven effect on domestic monetary settings in East Asia. The coefficient ranges from a low of zero in China through 0.07 in Malaysia, where the policy rate moves least, to a high of 0.77 in the Philippines. These can be interpreted as indicating that, controlling for local macroeconomic conditions and the exchange rate, local central banks respond to a 100 basis point move in the US policy rate to the extent of 7 to 77 basis points.

“Central bank purchases of government bonds in major markets lower yields not only in those markets but also in bond markets elsewhere… A major central bank exchanges excess reserves for government bonds held by investors, who suddenly have a portfolio with lower than targeted duration. They seek to restore duration by buying similar bonds, including bonds of other governments. Such purchases, or the expectation of purchases, serve to spread the lower yields from the targeted market to markets for bonds that are close substitutes.”

“We review evidence on the international diffusion of lower bond yields from central bank purchases. Such purchases can have market effects, either intended or unintended…[For example] Chen, et al (2012) examine the effect of G4 central bank domestic bond purchases on Asian bond markets. They find sizeable echoes of the lower US yields in Asia around the announcements associated with the first and second rounds of bond-buying by the Federal Reserve,” 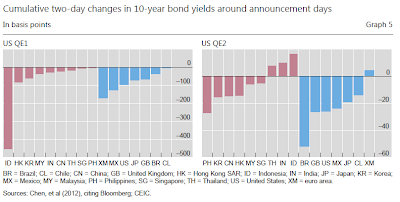 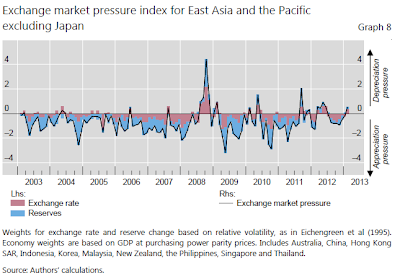 “Taking [China, Hong Kong, and South Korea], the region’s foreign currency credit extension has grown faster than regional foreign currency deposits. As a result, it is becoming more dependent on the global interbank market to provide dollars, as Korea has long been.”

“Dollar and other foreign currency (mostly Hong Kong dollar) loans have long been a feature of the Chinese banking system, but they have been growing very rapidly in recent quarters… Taking a longer view, since bottoming out in March 2009, foreign currency loans booked in China and loans extended cross-border to non-banks in China by BIS-reporting banks have grown very rapidly. In particular, they have more than tripled in four years, rising from $270 billion to a conservatively estimated $880 billion in March 2013.”

“As a result of such rapid growth, local foreign currency and cross-border loans are rising as a share of overall loans…In particular, the share rose from around 7% to 8% before the crisis, only to fall to 5.3% in March 2009 in response to the global dollar shortage and the domestic policy response to expand credit to fund investment. Since then, the share of foreign currency and cross-border loans has risen to at least 8.5%, the highest proportion over the ten years of data.” 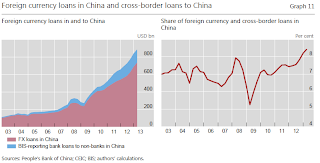 “A credit device that recalls arrangements that led to cross-currency swaps has allowed US dollar credit extended in Hong Kong to China-related firms to become some of the most rapidly growing credit in the world. According to the Hong Kong Monetary Authority (HKMA), firms in China can use deposits in domestic banks to secure letters of credit from Chinese banks in Hong Kong. These are then drawn down in US dollars. Corporate liquidity in the home currency is transformed into borrowing power in foreign currency… Taken together, HKMA and BIS data show very rapid growth of foreign currency credit booked in Hong Kong as well as extended to Hong Kong nonbanks from outside the territory.”

“In the case of Korea, foreign currency credit is extended not only by banks in Korea and by banks outside of Korea. In addition, banks in Korea extend dollar credit, or perhaps more accurately, convert won credit to dollar credit, when they buy dollars forward from Korean exporters… Many discussions of this phenomenon do not recognise that a Korean firm that sells dollars forward is essentially redenominating its debt from won to dollars. A transaction that would be in many ways similar would be for the same firm to sell a dollar bond… Where do the dollars come from in the case of Korea? The high ratio of foreign currency loans to deposits means that the dollars come from outside Korea. This is all the more so if the net won assets of foreign banks are included in the definition of foreign currency loans.”

“We find that policy in [China, Hong Kong, and South Korea] leans against the common low external rates in the direction of raising the cost of dollar credit above global levels. In other words, policy tends to resist cheap foreign currency credit and thereby to impede the transmission of global impulses. Thus we add a new policy dimension to the paradox of dollars being abundant and cheap at their source and scarce and sometimes expensive in the rest of the world.”

“BIS data show rapid growth in outstanding international debt securities of issuers ultimately owned by firms in China, Hong Kong and Korea. In China, outstanding foreign currency bonds have more than doubled in the three years from Q1 2010 to Q1 2013, albeit from a low base. Such bonds have grown by about 40% over that period for firms of Hong Kong or Korean parentage, and have reached respectively a quarter and a half of the [foreign currency] bank loans.”