A New York Fed blog post revisits the self-reinforcing dynamics in long-term U.S. interest rates, resulting from the dynamic hedging of MBS positions (see previous post here). However, it argues that the probability of severe “convexity events” has been reduced since the Federal Reserve has become a large holder of MBS that hedges little and infrequently.

“The interest rate risk of MBS [mortgage backed securities] differs from the interest rate risk of Treasury securities because of the embedded prepayment option in conventional residential mortgages that allows homeowners to refinance their mortgages…When interest rates fall, homeowners tend to refinance their existing loans into new lower-rate mortgages, thereby increasing prepayments and depriving MBS investors of the higher coupon income. However, when rates rise, refinancing activity tends to decline and prepayments fall, thereby extending the period of time MBS investors receive below-market rate returns on their investment. This is commonly known as ‘extension risk’.”

“The effect of the prepayment option can be seen in the chart below, which displays the relationship between yield changes (x-axis) and changes in the value of an MBS (black) and a non-prepayable ten-year Treasury note (red)… When interest rates increase, the price of an MBS tends to fall at an increasing rate and much faster than a comparable Treasury security due to duration extension, a feature known as the negative convexity of MBS. Managing the interest rate risk exposure of MBS relative to Treasury securities requires dynamic hedging to maintain a desired exposure of the position to movements in yields, as the duration of the MBS changes with changes in the yield curve. This practice is known as duration hedging… If sufficiently strong, this hedging activity can itself cause interest rates to rise further, and further increase duration for MBS holders, inducing another round of selling of Treasuries.” 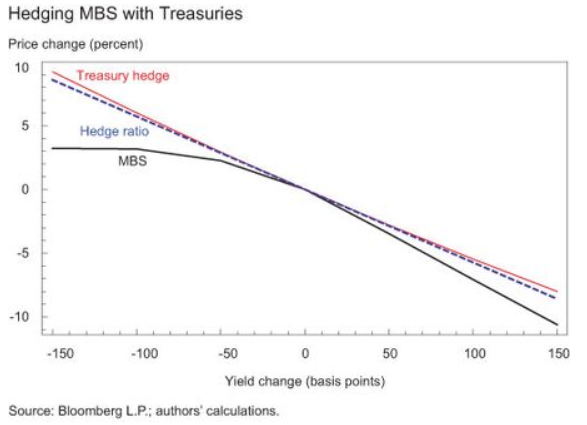 “MBS investors, broadly speaking, fall into two categories: those holding MBS on an unhedged or infrequently hedged basis and those that actively hedge the interest rate risk exposure. Unhedged or infrequently hedged investors include the Federal Reserve, foreign sovereign wealth funds, banks, and mutual funds benchmarked against an MBS index. MBS holders who actively hedge include real estate investment trusts (REITs), mortgage servicers, and the government-sponsored enterprises (GSEs)…The pie charts [below] compare the holders of MBS in 2005 and at the end of 2012. The biggest change is the increase in Federal Reserve holdings, partly offset by a large reduction in the actively hedged GSE portfolio.” 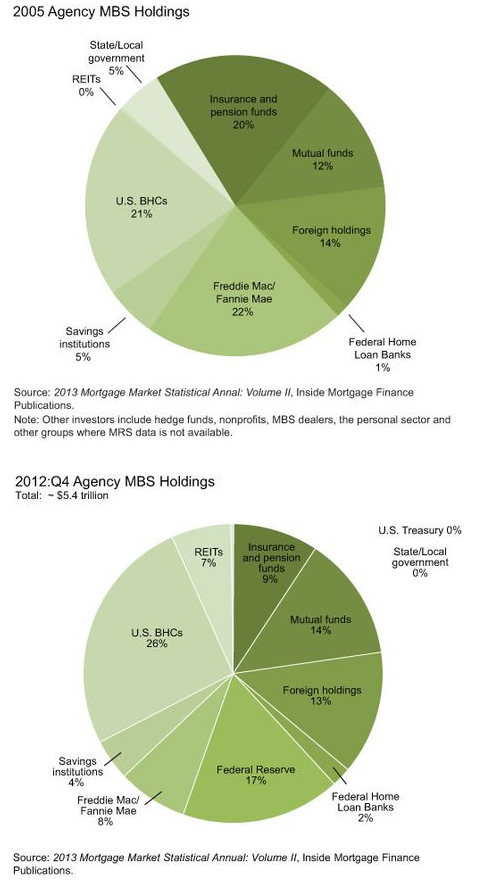 “The low-rate environment in early 2013 had arguably set the stage for a convexity event (historically low rates coupled with substantial negative convexity). As the ten-year yield rose from 1.70 percent in early May to 2.90 percent in August, mortgage portfolio durations extended significantly, forcing MBS hedgers to sell duration, or to sell the underlying MBS. However…while the rate increase was similar in magnitude to the June 2003 sell-off, for example, it was more gradual and therefore inconsistent with a sell-off driven primarily by convexity hedging. A convexity event of the intensity seen in 1994 and 2003 did not materialize in 2013, and the risk of one occurring in the near future is lower as the Fed continues to hold a significant portion of all mortgage convexity risk and mortgage rates have risen substantially from their early 2013 lows.”