According to Nomura’s Zhiwei Zhang and Wendy Chen, “China is displaying the same three symptoms that Japan, the US and parts of Europe all showed before suffering financial crises: a rapid build-up of leverage, elevated property prices and a decline in potential growth…the most vulnerable areas are local government financing vehicles, property developers, trust companies and credit guarantee companies.”

“Empirically, the build-up of leverage has been identified as a simple but tried and tested leading indicator for financial crises in academic research…”

“Leverage in China‟s economy, as measured by the domestic credit-to-GDP ratio has reached its highest level since data was made available in 1978…as the government implemented proactive fiscal and monetary policies to support growth and relied on bank loans to finance the fiscal expansion….The domestic credit-to-GDP  ratio, rose quickly from 121% of GDP in 2008 to 155% in 2012. Looking at China’s history over the last 30 years, there was a similar build-up of leverage in the 1990s which made the whole banking sector insolvent….International comparison also suggests the build-up of leverage since 2008 is dangerous. We notice an interesting common phenomenon which we call the ‘5-30 rule’, where financial crises in large economies are usually preceded by the leverage ratio rising sharply by 30% of GDP in the five years before the crisis is triggered.” 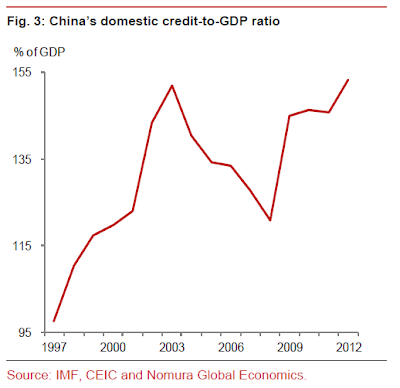 “The domestic credit-to-GDP  ratio only captures credit provided by the official banking system and does not include credit supplied through the bond and equity markets, or the shadow banking system. In April 2011, the PBoC began to publish a ‘total social financing’ statistic, which attempts to measure overall credit supply to the economy…The main components are:” 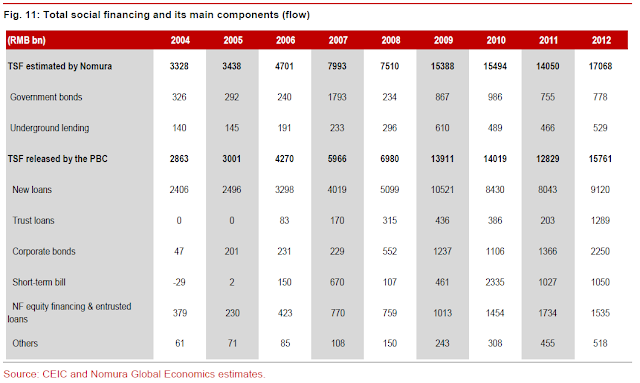 “The other channel is underground lending, which is reportedly active in some regions such as Wenzhou and Erdos…the PBoC conducted a survey in mid-2011 and concluded that the stock was RMB3.38trn, equivalent to 5.8% of total bank loans.”

“Property sector conditions seem rather benign, with prices rising by only a very moderate, cumulative 113% over the period 2004 to 2012 in major Chinese cities…[However] a recent academic paper provided a hedonic [quality-adjusted] index for 25 major cities. According to three professors in Tsinghua University and National University of Singapore (Wu, Deng and Liu, 2013), property prices rose by 250% from 2004 to 2009, far outstripping the level of growth in the official index. By comparison, it also rose faster than the Case-Shiller US housing price index, which climbed by 84% from 2001 to its peak in 2006.”

“In China, there are also signs of a slowdown in potential growth, driven by a decline of both the labor force and productivity growth… The three main sources of China’s competitiveness – demographics, an undervalued currency and reform dividends – have all weakened since 2008. On the demographics side, trends that were working in China’s favour before 2008 have now turned against it.”

“The demand-supply ratio in the urban labor market is arguably the best indicator of wider labor market conditions in China. The ratio was persistently below 1 before 2009, suggesting the labor market was over-supplied, mostly due to the large influx of migrant workers from inland rural areas. But in 2009 the trend reversed. The ratio climbed above 1 in Q4 2009 and remained there for 12 consecutive quarters. Even when GDP growth slowed to 7.4% in Q3 2012, the ratio remained above 1, which suggests to us that the potential growth rate has likely slowed to 7.0-7.5%.” 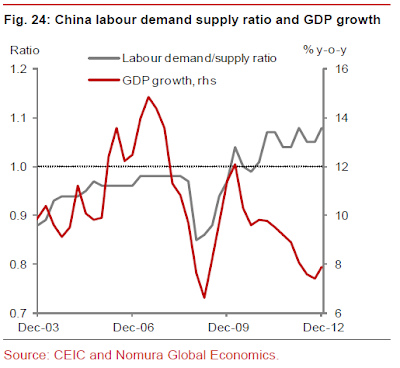 The vulnerability of major economic sectors.

The ECB’s quantitative and qualititative easing