Another (IMF) paper of Manmohan Singh deals with the influence of non-conventional monetary policy on collateralized borrowing. In past years, quantitative easing (QE) has absorbed collateral from private funding markets and, thereby, reduced private repurchase (collateral) rates relative to policy rates. An unwinding of central bank balance sheets in the future could increase the spread between policy and collateral rates – if the collateral finds its way on bank balance sheets – or reduce the degree of financial “lubrication” – if it ends up with non-banks. Put differently, in a large-scale QE unwind central banks could temporarily lose  control over lending conditions.

“Collateral and Monetary Policy”, Manmohan Singh
IMF Working paper WP/13/186, August 2013
http://www.imf.org/external/pubs/ft/wp/2013/wp13186.pdf
The below are excerpts from the paper. Cursive text and emphasis have been added.

Reiterating the point of collateral and financial intermediation

“Collateral is essential to the financial plumbing and underpins a wide range of financial transactions: secured funding (mostly by nonbank investors), repurchase agreements (or repo), and hedging (primarily with over-the-counter derivatives) .” (view post here)”The collateral intermediation function is likely to become more important over time. In the short term, increased counterparty risks (as during 2007–08 and in Europe today) make secured funding more attractive. In the longer term, with more arm’s-length transactions in an increasingly globally integrated financial system, market participants are seeking the security of collateral to underpin a wider range of claims. New regulations are also likely to increase the demand for collateral-based operations.””Collateral rate (or repo rate) is the rate at which cash is lent against collateral for an agreed tenor. Typically, collateral shortage lowers repo rates; collateral abundance increases repo rates. This rate is a proxy for collateralized transactions that underpin the financial plumbing between the dealer banks/nonbanks…When collateral use drops, financial intermediation slows, with effects similar to the drying up of interbank markets.” 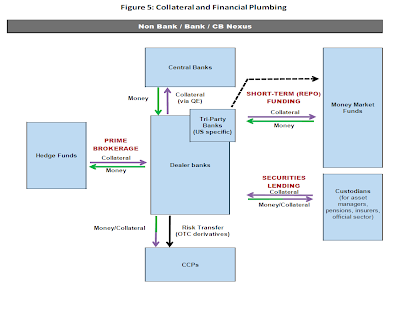 A framework of thinking about collateral and QE

“Although there is a continuum between good and bad collateral, for simplicity we define C1 that is good collateral in all states of nature and can be converted to money or deposits including excess reserves (D) at no haircut. C2 is collateral that under normal market conditions is “good” but otherwise loses value. During a crisis, C1 (such as U.S. Treasuries or Bunds) and D may continue to be acceptable at par. There is a sudden split between D+C1, and everything else.”

The consequences of unwinding QE

“Sooner or later [central bank] balance sheets will unwind…unwind will increase both, the (money) interest rate and the (collateral) repo rate…Analogous to a coiled spring, the larger the QE efforts the lesser the control central banks may have on the “wedge” between repo rates and their policy rate. This is likely to result in very little collateral release to the markets [in the first place]…Central banks that have withdrawn collateral via QE will be the biggest holder of good collateral.”

“When central banks buy securities, one of the immediate effects is to increase bank deposits, which adds to M2 (in the U.S., practically the Fed has bought from nonbanks, not banks)… At present, the Fed has proposed a reverse repo program to unwind its balance sheet; however this will be contingent on balance sheet “space” at banks and nonbanks amidst a tighter regulatory environment (and the interaction of repo and policy rates). With Basel III regulations at the door, the banking system is likely to have limited appetite for these securities except for capital buffers. Nonbanks “balance sheet space” is key to any unwind of collateral.”