The IMF Article IV consultations for the U.S. suggest that a Federal Reserve exit from unconventional and highly accommodative policy may be challenging. Most importantly, quantitative estimates and past experiences indicate that the term premium on long-dated bond yields can vary greatly and become disruptive for markets and the economy. Meanwhile, the envisaged “passive” rundown of large treasury and MBS holdings would take a long time to unwind the Fed’s bloated and more risky balance sheet. And as long as excess reserves are ample even the Fed’s control over short-term rates will be imperfect.

“Ensuring an orderly exit from ultra-accommodative monetary conditions is likely to be accompanied by a range of operational and other policy challenges…[i] containing abrupt, sustained moves in long-term interest rates; [ii] managing an effective pass-through from policy tightening to short-term market rates; and [iii] coping with potential balance sheet losses.”

“Long-term bond yields behaved differently during recent episodes of monetary tightening, largely due to different responses in the term premium. The 1994-1995 tightening episode―which saw policy rates rise 300 bps over a 13-month period―was accompanied by a substantial increase in the term premium, reflecting concerns among bond investors over inflation and a lack of policy transparency from the Fed…During the 1999–2000 episode, when policy rates rose by a more modest 175 bps over a similar timeframe as in 1994–5, there was a more subdued rise in the term premium. In contrast, the 2004–06 cycle, which saw policy rates rise by 425 bps in 25 bps increments over a two-year period, was accompanied by a substantial decline in the term premium, arguably leading to a somewhat more accommodative policy stance than intended by the Fed. ” 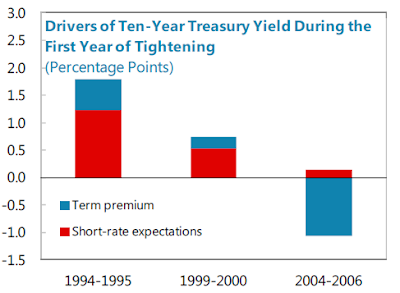 “A rapid change in the term premium might complicate the exit from QE and normalization of monetary policy. Various factors could potentially exert sudden upward pressure on the term premium in the forthcoming cycle, including, for instance, uncertainty about the U.S. or global economic recovery and inflation outlook or general policy uncertainty as the Fed seeks to re-normalize monetary policy conditions.”

“Events that lead the market to expect an earlier unwind of the LSAP may also trigger a change in the expected timing of short-term rate increases, thereby driving 10-year bond yields higher. A simple calculation suggests that expectations of an earlier federal funds rate “lift-off” of two quarters may increase the ten-year bond yield by at least 25 basis points. Changes in market sentiment may also be accompanied and further reinforced by heightened financial market volatility. In our…scenario (“Rush to Exit” in the midst of heightened policy uncertainty and market volatility), higher financial market volatility leads to an additional 40 basis point increase in the ten-year term premium, resulting in an overall jump in the term premium of almost 100 basis points and an increase of more than 125 basis points in ten-year Treasury bond yields. The magnitude and persistence of such increases would be comparable to those of Greenspan’s “long-term bond yield conundrum” during 2004–2006―but in reverse―and would likely generate pervasive effects on the U.S. economy and global financial markets.”

“At just over USD3 trillion, the Fed’s balance sheet is already more than twice as large as it was before the financial crisis . The composition has also changed. Pre-crisis, the portfolio was comprised almost exclusively of Treasury securities more or less consistent with the maturity distribution of the stock of outstanding marketable Treasury securities and liabilities mostly comprised of costless currency in circulation. Currently, assets include a mix of Treasuries, agency mortgage-backed securities (MBS), as well as agency debt. The overall duration of the portfolio is also longer, partly due to Operation Twist (whereby the Fed sold short-term securities from its portfolio and bought long-term securities), while liabilities are dominated by bank reserves on which the Fed pays interest.”

“In principle, it is possible for the Fed to allow its portfolio to shrink exclusively through passive run-off, but it will take a long time for the overall portfolio to normalize both in terms of size and composition. Assuming that QE-related purchases continue through June 2014, it would likely take about five years for the treasury portfolio to revert to its historical norm. Based on this simulation, the duration of the portfolio will remain above the historical average for some time. The MBS portfolio will take much longer to wind down if the Fed relies only on passive pay-downs, since prepayment speeds will likely slow as interest rates rise. Even under aggressive assumptions for prepayment speeds, the MBS portfolio will likely take roughly 30 years to fully run off.”

“The effective fed funds rate has remained below the IOER since its inception. This means that some institutions effectively lend funds at a rate below that paid by the Fed. This is partly because not all participants are eligible to receive interest on their reserve balances. The GSEs [Government Sponsored Enterprises, such as Fannie Mae], in particular, which are significant lenders of cash in the fed funds market, are not eligible to receive interest on balances held with the Fed. At the same time, the Fed’s LSAP [Large-Scale Asset Purchase] programs have led to a steady increase in excess reserve balances, in turn reducing interbank trading volumes (since a primary reason for banks to borrow fed funds is to ensure that they maintain sufficient reserves)… Fed funds effective trading volumes were around USD250 billion pre-crisis and have fallen to approximately USD50 billion per day currently.”