Target2 is the real-time gross settlement system of the Eurosystem. It allows central banks to redress reserve losses that result from balance of payment deficits. A working paper of the University of Siena illustrates how Target2 prevented the euro area sovereign crisis from escalating into large-scale defaults and devaluations. Limitations to Target2 could downgrade the monetary union to a fixed exchange rate regime, if international flows become large enough.

“The implications of Target2 in the European balance of payment crisis and beyond”, Sergio Cesaratto
University of Siena, Working Paper 681, August 2013

The below are extracts from the paper. Cursive text and emphasis have been added.

Balance of payments constraints in the euro area

“In a currency union, banks may grant loans…to trustworthy customers in any member country, confident that the central bank will provide the necessary reserves. These loans can be employed… to make payments to other countries without any need to resort to official reserves or foreign loans. This ability is independent of whether the region in which the loan is accorded has its current account in surplus or deficit…[By contrast] in a fixed exchange rate regime the capacity to sustain autonomous spending by creating loans is limited by available official reserves or the ability to obtain foreign loans.”

“Does this mean an absence of foreign constraints for …[euro area] members? The answer seems to be no, as any economic unit [member country] must be solvent in the long-run…International payments take place through transfer of bank reserves, i.e. high-powered money, and…these reserves can be recreated by Eurosystem national central banks in deficit countries (and sterilised in surplus countries), just as the central bank does in a monetarily independent country when the interbank loan market breaks down.”

“Monetary unification eliminates one of the two causes of interest rate spreads, i.e. exchange rate risk, but not the other, linked to trustworthiness of debtors. Financial speculation, unable to target exchange rates, concentrates on the sovereign bond market, determining a fall in bond prices, making servicing of debt unsustainable and exposing the country to risk of insolvency. In the market word goes round that the country would be better off leaving the currency union and using inflation as a way out of its difficulties; these rumours aggravate the crisis, giving credibility to the rumours…In other words, the almost unthinkable in the American federal currency union is thinkable in the euro area flawed currency union, namely countries turning insolvency risk into devaluation risk or ‘convertibility risk’ as Mario Draghi defines it.”

How Target2 operates under external imbalances

“Consider the Eurozone and Eurosystem (ECB plus the national central banks). Typically a peripheral bank (say Santander) loses deposits in favour of a core-euro area bank (say Deutsche Bank, DB) because of (Spanish) current account imbalances (e.g. more payments are made for imports than are received from exports) or, increasingly since 2011, because of capital flight from the periphery to core-Europe.” 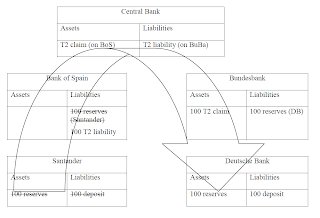 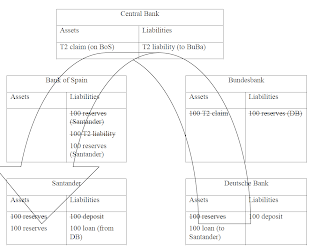 “However, suppose that the euro area interbank loan market breaks down, as it has since about 2008. In this case Target2 still allows Santander to transfer a deposit to DB (be it a payment for an import from Germany, or a German withdrawal of private financial investment in Spain). In either case Santander cannot recover the lost reserves via a loan from DB. So the Target2 imbalances are not cancelled out by a private transaction in the opposite direction (as in step 2 above). At this point BoS replenishes Santander’s reserve account (with €100) through a short or long term refinancing operation available in the Eurosystem, managed by national central banks.” 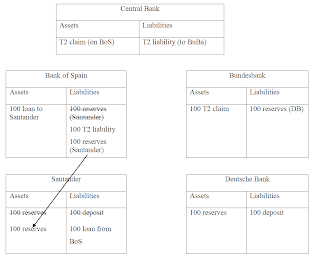 “In a fixed exchange rate regime, a country which is losing reserves either lets its currency fluctuate or uses monetary and fiscal policies to reduce domestic demand, or both. In the EMU, if a country is losing reserves (since private banks from the surplus countries are not lending them anymore or are withdrawing former loans), this loss appears as a Target2 liability while refinancing operation re-constitute the lost reserves. This clearly avoids a liquidity problem in peripheral countries (banks are never short of liquidity), but not the solvency aspect….Can this capacity be used indefinitely? In principle the capacity is quite ample, as long as the country has enough eligible collateral to access the refinancing operation and the eligibility criteria set by the ECB or by the national central banks.”

The euro area crisis and Target 2

“The European Monetary Union (EMU) has generated ephemeral growth in some peripheral eurozone countries sustained by capital flows from core-countries. Similar to past standard financial crises in emerging economies, this sequence of events has been followed by real exchange rate revaluation and deterioration of foreign accounts. [Later]…external financing flows dried up and the previous stock of loans began to be repatriated. At this stage, Target 2 began to play a fundamental role in avoiding a precipitous BoP crisis.”

“The economic meaning of what happened is ably summed-up by Deutsche Bank (2011): ‘The Bundesbank not only financed Germany’s current account surplus, replacing earlier private capital flows, but also net capital imports into Germany – to a large extent owed to the repatriation of German investments abroad. Associated with this change in lending patterns was also a big transfer of credit risk from the private banking sector to the Bundesbank.’. This statement, precious since it comes from an unsuspicious source, stresses the role of Target2 in permitting prolongation of the German export-led model, even when previous loans are withdrawn. In this sense, Target2 and refinancing operation saved German banks from likely default resulting from debtors leaving the euro, by shifting credit risk onto the shoulders of the whole Eurozone (not solely the BuBa), with some serious limits.”

“In a flawed currency union, the absence of friendly federal crisis resolution mechanisms, deficit countries might be tempted to leave a flawed currency union. Mechanisms such as Target2 and refinancing operation avoided the BoP crisis to unfold like in a fixed exchange rate regime, however they cannot fix a solvency problem made worse by ‘convertibility risk’.”