The ongoing economic misery of the euro area periphery reflects the compounded deleveraging of corporates, households, financial institutions, and governments. According to a new IMF paper, the process could still take years to complete. Simultaneous deleveraging across all sectors typically causes negative feedback loops, constraining economic growth and credit conditions.

Indebtedness and Deleveraging in the Euro Area
Euro Area Policies- IMF 2013 Article IV Consultation
Selected Issues Paper, July 2013
http://www.imf.org/external/pubs/ft/scr/2013/cr13232.pdf
The below are excerpts from the report. Cursive text and emphasis have been added.
“Balance sheet adjustment in the euro area at the current juncture may prove more challenging than in other regions or in other episodes in the past. The simultaneous deleveraging of the public and private sector in some countries appears increasingly daunting. And a fragmented financial sector with its own balance sheet problems amplifies the effect of private sector balance sheet stress on economic outcomes.””Since the early 2000s, private and public debt increased most sharply in countries now under stress. Debt is particularly high in Ireland, Portugal, and Spain, where households, the non-financial corporate sector and the government are all highly indebted compared to their euro area peers. In addition, a number of other countries have high debt in one or two sectors. And when all sectors are highly indebted, sizeable net external liabilities have accumulated.”

“Indebtedness of euro area firms increased substantially in the first decade of EMU, on the back low real interest rates and prospects of high growth. Higher bank debt, combined with falling equity valuations, has boosted corporate leverage during the crises, threatening debt sustainability…Firm level data suggests that in some euro area economies up to 20 percent of corporate debt may not be sustainable…Higher bank lending rates resulting from financial fragmentation are felt strongly in the bank-dependent small and medium-sized enterprises (SME) segment, which has a large share in value added. Lending conditions are tight, further reducing available financing for solvent firms…Insolvencies have increased markedly where corporate debt is high.” 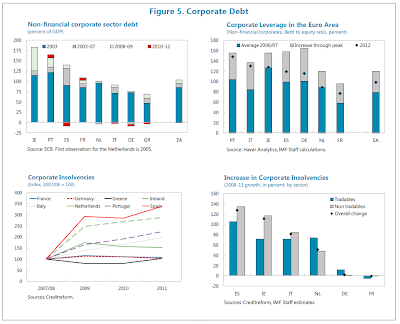 “Corporate debt levels are not much higher compared to the beginning of historic episodes of corporate deleveraging, but debt reduction has barely started. While the levels of debt are comparable to previous episodes, the increase in corporate debt in the boom cycle was particularly large in Ireland and Spain, compared to historic episodes. Episodes of significant corporate deleveraging suggest that after large booms, an average of two thirds of the increase in debt is subsequently reduced. In the euro area, corporate leverage has receded from the crisis peak in some countries; but debt-to-income ratios remain high.”

“The turn of the housing cycle triggered sector-wide deleveraging where real estate bubbles had driven debt up, especially in those countries where declining real interest rates and rapidly rising incomes encouraged households to contract debt. Mortgages represent the largest share of household debt in euro area countries and they have been the most significant driver in the increase of household debt since the start of the euro. When the housing boom burst around 2007-08, households were left with high debt and overvalued assets, in particular in Ireland and Spain…Despite these efforts to repair balance sheets, household debt continued to increase until 2009. It has since started to decline in Ireland, and, to a lesser extent, in Portugal and Spain.” 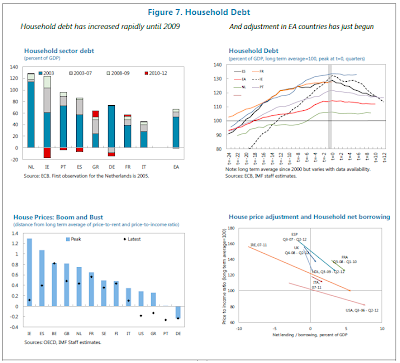 “The magnitude of the post-2000 [household] credit boom was unprecedented…The increase in household indebtedness in many advanced economies was on average 20 percentage points of GDP higher than in other credit cycles in the past…With household debts barely off their peak levels, the deleveraging process in euro area countries is expected to take many more years if debt is to return to the 2000 level. A notable [contrast] is the US, which is two-thirds of the way through the pre-crisis level.”

“In most historical episodes, household deleveraging was facilitated by higher inflation, and an expansionary fiscal policy…Projections suggest that the macroeconomic context this time around will be more challenging. Euro area inflation is expected to undershoot the price stability objective…Likewise, fiscal policy will be less supportive of private sector deleveraging than in past episodes, because public debt levels are significantly higher in most countries now than in the past.”

“In many euro area countries, a highly leveraged financial sector impairs intermediation and burdens the sovereign. Many banks in periphery economies had traditionally relied on wholesale funding, and have built large exposures to sovereigns and the real estate market. The share of non-performing loans (NPLs)—both from households and corporates—has risen rapidly, increasing uncertainty surrounding the banks’ asset quality, and in turn increasing funding costs and driving share prices down. In a fragmented European financial market, such banks face an uphill battle to strengthen their capital position, so as to provision for NPLs, buffer their sovereign exposure, and meet new regulatory requirements.

“As the private sector entered the deleveraging cycle, debt “migrated” to the public sector—through bank recapitalization or debt financed fiscal demand support—while other sectors moved to reduce their debt burden.”

“Historical experience suggests that household deleveraging in the euro area will continue to weigh down on growth. Average annual real GDP and consumption growth were about 1.5 percent lower during the deleveraging period than in the preceding period.”