A new empirical study suggests that the Federal Reserve has exerted a stronger influence on fixed income, commodity, and currency markets since it started using non-conventional monetary policy. This is not because monetary policy shocks have been larger, but because their transmission has become more powerful and pervasive.

What has been researched?
“In this paper we investigate the impact of monetary policy shocks on asset markets in the United States over the period February 1996 to April 2014. We consider the response of interest rates, corporate bond prices, equity prices, real estate investment trust (REIT) prices, the price of gold and the US dollar / Japanese yen exchange rate…[In particular] we investigate whether the size of monetary policy shocks and/or the responses of different asset markets have changed with the transition from operating.”
How to measure monetary policy shocks?
“When nominal interest rates reach zero, conventional monetary policy cannot lower interest rates further because the availability of physical currency effectively offers a risk-free investment at a zero rate of interest…To provide further monetary stimulus beyond a zero policy rate, central banks have turned to unconventional policies.”
“The shadow short rate is a synthetic summary measure that is derived from yield curve dataand essentially reflects the degree to which intermediate and longer maturity interest rates are lower than would be expected if a zero policy rate prevailed in the absence of unconventional policy measures…The shadow short rate can be obtained from…yield curve data across both normal and unconventional monetary policy periods and therefore provides a consistent measure of a short term interest rate for quantitative analysis.” 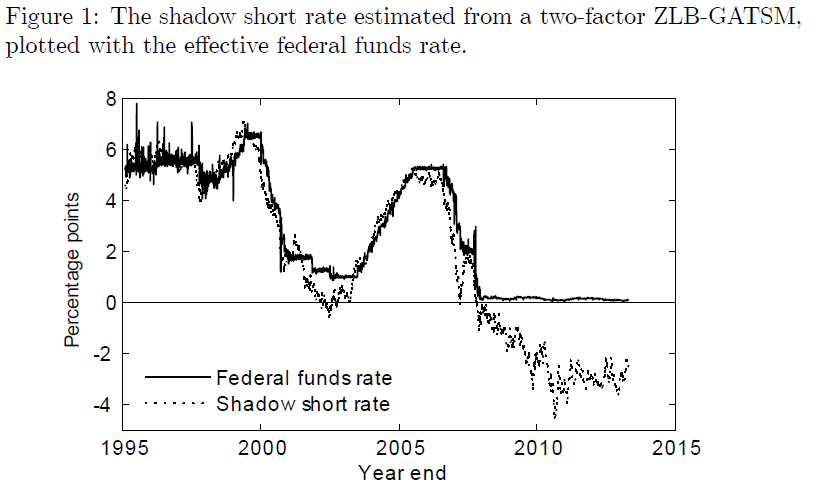 “The shadow short rate we employ is estimated…based on the principle that an actual short term interest rate… may be viewed as the sum of two components: (i) a shadow short rate that can take positive or negative values; and (ii) an expression that accounts for investors’ option to hold physical currency to avoid a negative return if the shadow short rate is negative…given an observation of yield curve data that is materially constrained by the zero lower bound, we can decompose it into the shadow yield curve with negative interest rates for some maturities and the option effect due to the availability of physical currency.” 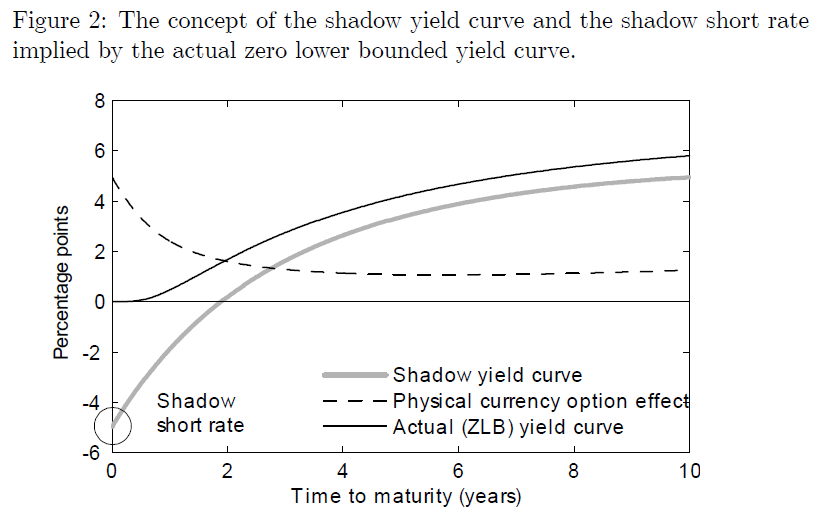