Academic work suggests that public debt above 90% of GDP is a drag for GDP growth. This would apply to the developed world today. However, a new IMF paper based on a broad panel of countries going back to 1875 qualifies this rule. It suggests that high debt does not per se reduce growth. Only if debt levels are both elevated and rising, growth tends to suffer. On its own high debt does often entail greater output volatility, however.

“An influential series of papers by Reinhart and Rogoff (2010, 2012) argues that there is a threshold effect whereby debt above 90 percent of GDP is associated with dramatically worse growth outcomes…Similarly, Cecchetti et al (2011) find that beyond 96 percent of GDP, public debt becomes a drag on growth—leading them to conclude that ‘countries with high debt must act quickly and decisively to address their fiscal problems.’ Focusing on the Euro Area alone, Baum, Checherita and Rother (2013) also find that debt has a non-linear effect on growth, leading to lower growth when it exceeds 95 percent.”

“There is the issue of causality: high debt may be the result of sluggish growth or it could reflect a third factor (an omitted variable) that simultaneously increases debt and reduces growth. Obvious examples are wars or financial crises.”

“The IMF Fiscal Affairs Department recently compiled a comprehensive database on gross government debt to GDP ratios covering nearly the entire IMF membership [188 countries] back to 1875… The average debt-to-GDP level in the sample is 55 percent while the average real output per capita growth rate is 2¼ percent. Given that the sample encompasses two world wars and the Great Depression, there are numerous outliers.”

“We focus on the long-term relationship between today’s stock of debt over GDP and GDP growth in the next [1-15] years. By taking a longer-term perspective we try to mitigate the reverse causality effects that temporary recessions or bursts of growth can have on the debt-to-GDP ratio in the short run…By ruling out overlapping episodes and requiring that each episode begins with debt crossing a given threshold from below, each country is allowed to have only a relatively small number of episodes. These episodes are pooled together and weighted equally when computing averages.”

“We observe that GDP growth is particularly low in the year after the debt-to-GDP ratio reaches levels above 90 percent… At the same time, the inter-quartile range across all episodes reveals that the growth performance for countries with debt rising above 90 percent is quite diverse… While it is possible that when the debt-to-GDP ratio exceeds 90 percent countries enter a state of distress that leads to a substantial reduction in growth, it is equally possible that increases in public debt above 90 percent are driven by an omitted variable that reduces GDP and tax revenues that, in turn, leads to higher debt.” 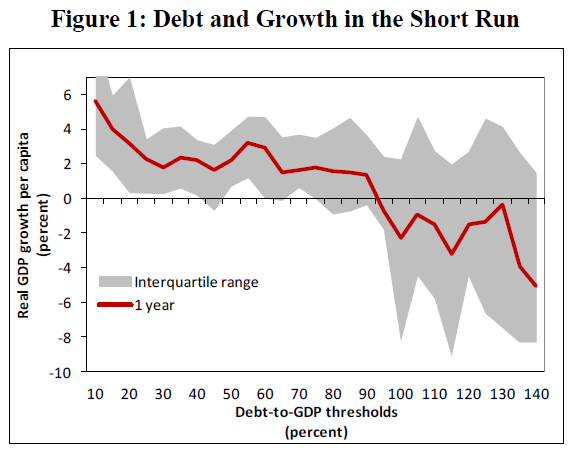 “In Figure 2, we show the growth performance of the same episodes over longer horizons… Relative to the previous case [of a one year forward horizon] the growth performance [after debt exceeds the 90% threshold] improves considerably…at a 5-year horizon. The improvement is particularly noticeable for horizons of 10 and 15 years. Importantly, while higher debt is still associated with milder growth, there is no longer any clear debt-to-GDP threshold above which growth deteriorates sharply.” 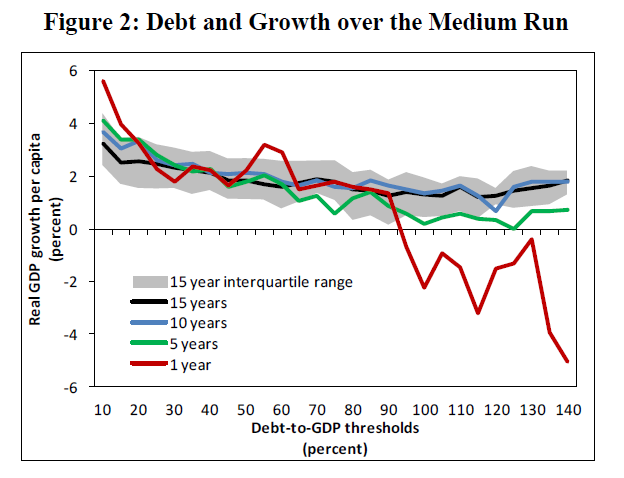 The importance of the debt trajectory

“We also find evidence that the debt trajectory can be just as important, and possibly more important, than the level of debt in understanding future growth prospects. Indeed, countries with high but declining levels of debt have historically grown just as fast as their peers.”

“The left chart [in figure 4 below] shows that the sharp reduction in growth that we observed in countries whose debt increases above 90 percent is no longer present for countries that have high debt on a declining path even at a 1-year horizon. In fact, even countries with debt ratios of 130–140 percent but on a declining path have experienced solid growth…High debt itself is not causing the low growth in these episodes but other factors, associated with increasing debt, are more strongly implicated…The initial debt trajectory remains important even after 15 years [as suggested by the right hand chart below].”

Public debt and the volatility of growth