The “net stable funding ratio” is a quantitative liquidity standard for regulated banks, scheduled to go into effect in 2018. It will require stable funding sources to be equal or exceed illiquid assets. It may to some degree restrict term transformation of regulated banks and encourage migration into shadow banking. The impact of the new regulation will differ across countries and institutions.

“Liquidity risk [in banks] arises on both sides of the balance sheet: if either the liquidity generated from selling liquid assets, or from securitizing assets, or the liquidity available from various funding sources is insufficient to meet cash obligations as they fall due. Maturity transformation inherently exposes banks to investor and/or deposit runs, with implications for bank solvency and bank survival.”

“Under its new international regulatory framework for banks, known as Basel III, the Basel Committee on Banking Supervision (BCBS) issued two quantitative liquidity standards in 2010—the Liquidity Coverage Ratio (view post here) and the Net Stable Funding Ratio (NSFR). It is the first time that the BCBS is requiring liquidity risk standards to be implemented consistently across jurisdictions.”

“The NSFR…is defined as a bank’s available stable funding (ASF) divided by its required stable funding (RSF), with banks having to meet at minimum a regulatory ratio of 100 percent beginning 2018. ASF is the portion of a bank’s funding structure that is reliable over a one year time horizon, while the RSF is the portion of a bank’s assets and off balance exposures that are viewed as illiquid over a one year horizon.”

“The ASF and RSF weights range from 100 percent to 0 percent to reflect the stability of funding for liability categories and the liquidity of asset categories. A higher ASF weight is attached to more stable funding. For example, regulatory capital enjoys a 100 percent ASF weight while stable non-maturity deposits receive a 95 percent ASF weight. In contrast, funding from a financial institution with residual maturity less than six months has a 0 percent ASF. Similarly, liquid assets enjoy lower RSF factors while illiquid assets are assigned higher RSF factors. Central bank reserves have a 0 percent RSF weight and performing loans are assigned a 85 percent RSF weight.” 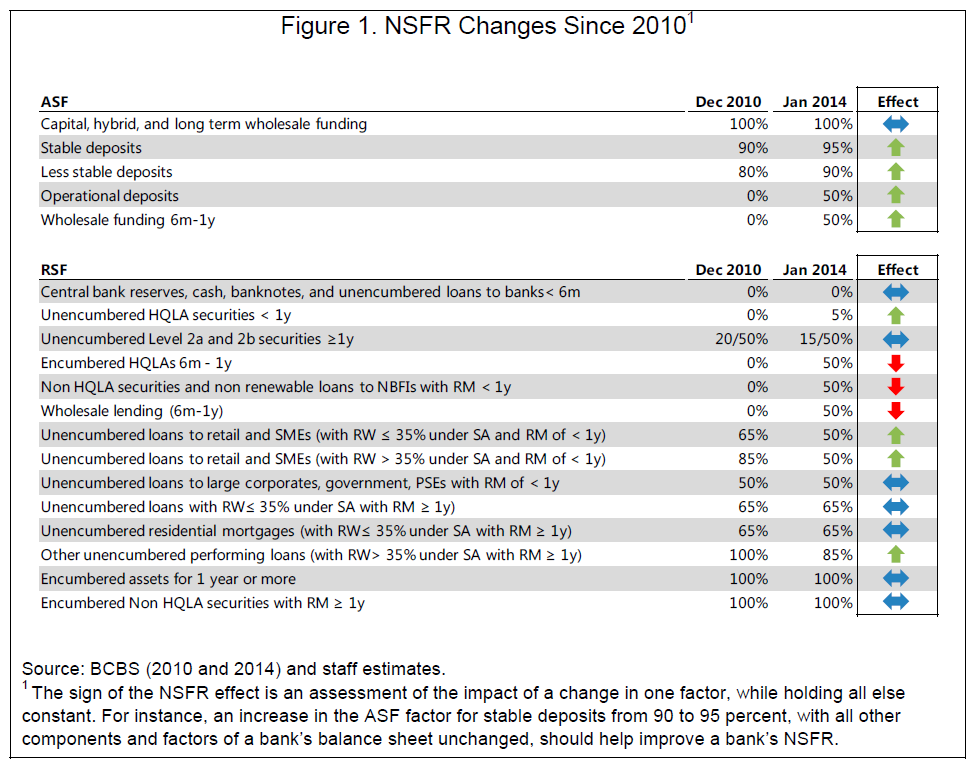 “The NSFR, which is expected to go into effect in January 2018, aims to encourage banks to hold more stable and longer term funding sources against their less liquid assets, thereby reducing maturity transformation risk.”

“Broadly, the NSFR aims at discouraging certain banking practices that are considered financially unsound, including excessive liability and asset concentrations and mismatch, and lowering reliance on instruments that are highly volatile and pro-cyclical. The NSFR should help discourage banks’ over-reliance on short-term wholesale funding (less than one year) and encourage greater mobilization of stable sources such as deposits or bond market financing, or even capital. In its calibration and intent, the NSFR takes on many aspects of traditional industry liquidity risk management practices, including balance sheet liquidity analysis and cash capital position.”

“The main arguments against the NSFR are that:

“The NSFR calculations were approximated using publicly available data for the largest global 100 banks (ranked by asset size) and for the largest banks in 128 countries. The calculations used the proposed weights according to the Basel III liquidity framework issued in January 2014…The results of the NSFR calculation using publically available data for a large number of countries and banks show there is no substantial gap in the NSFR globally, with [emerging markets] showing generally high NSFRs. But there is substantial variation among countries or banks in a country.”

“Most banks in Asia and some advanced countries, such as the United States, appear to have sufficient funding buffers to meet the NSFR minimum threshold by early 2018 without requiring significant adjustments to their balance sheet. By contrast, the transitional costs will be higher for countries with larger gaps, in particular if their systemically important banks have a shortfall. This includes some advanced countries such as Australia, France Italy and Sweden as well as large [emerging economies]…such as Brazil, Mexico, Ukraine and Russia.” 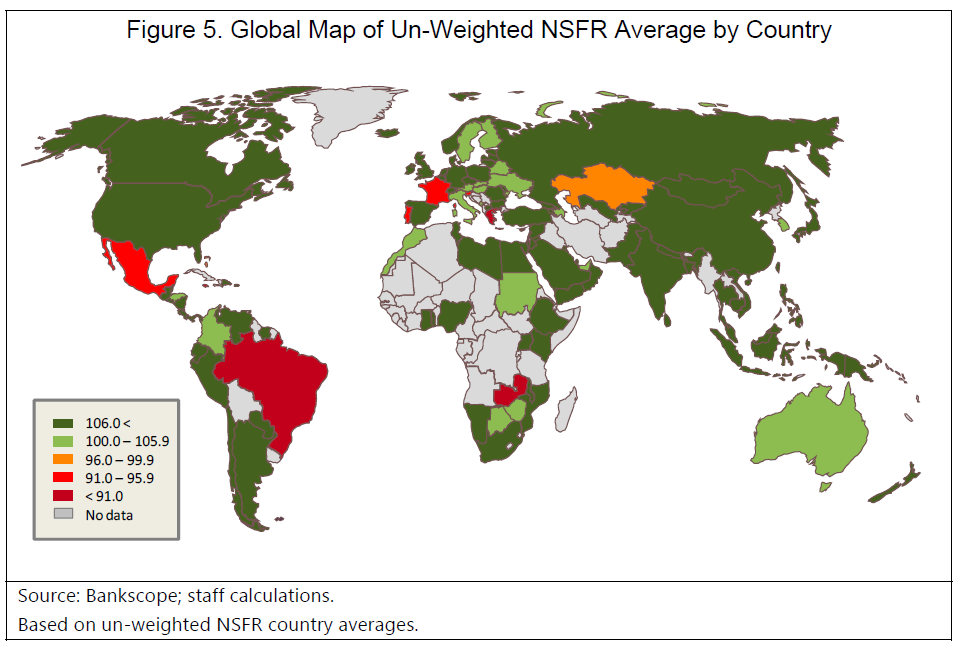