Dedicated EM exposure has surged by over 55% since 2007, with assets concentrated on few managers. A new BIS article points out that trading flows are correlated due to the widespread use of benchmarks. Moreover, EM asset prices and final investor flows have been pro-cyclical and mutually reinforcing. These patterns seem conducive to recurrent market dislocations.

The rise of EM asset management

“The global asset management industry is dominated by a small number of large players. In 2012, the share of the largest 20 AMCs was about 40% of the total AUM [assets under management] of the largest 500 companies, or USD28 trillion. Furthermore, the top five accounted for 18% of total AUM, with the largest player representing nearly 6% of the total.”

“EPFR data [a commercial database of mutual funds and ETFs] indicate that the AUM of dedicated EME funds have grown strongly. The total AUM of EME equity and bond funds increased from the pre-Lehman peak of USD900 billion in October 2007 to USD1.4 trillion in May 2014 (or about 8.5% of total EME equities and bonds outstanding). In particular, the total AUM of EME equity funds increased from USD702 billion at the end of 2009 to USD1.1 trillion at the end of 2013, and those of EME bond funds quadrupled from USD88 billion to USD340 billion over the same period.”


“A 1 percentage point reallocation of AUM of the largest 500 AMCs discussed above, the total size of which amounts to about USD70 trillion, would result in additional portfolio flows of USD700 billion to EMEs. This is larger than the…gross portfolio outflows in 2008 (USD246 billion) and inflows in 2012 (USD368 billion).”

“At the level of the asset management industry, the use of common benchmarks and correlation between benchmarks is of importance… For passively managed funds, including ETFs, the link between fund allocation and a benchmark is direct… Active managers do not necessarily fully replicate the portfolio weights of the benchmark. [But] the career risk of short-term underperformance against their peers can induce them to form similar portfolios or to “hug” their benchmarks as tightly as possible… [For example] country weights of EME bond funds tend to follow their benchmark weights [based on JPMorgan bond indices] quite closely…for the whole sample [January 2011 to June 2014]”

“We provide evidence showing that, during the past two years, investor flows to asset managers and EME asset prices have reinforced each other’s movements.”

“We count the number of bond funds that faced weekly net inflows or outflows each week from January 2013 to June 2014 for retail and institutional investors. We find that retail investors have a tendency to buy or sell at the same time. The finding…is not specific to EME funds…What is different is the volatility of the share of funds facing inflows or outflows, which is greater for EME funds than for AE funds.” 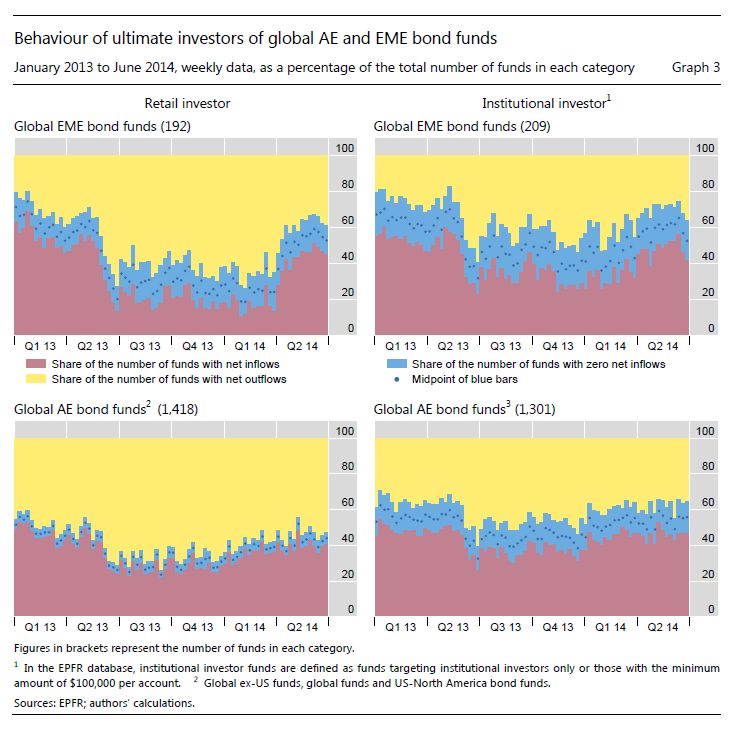 “We estimate a small vector autoregressive (VAR) model. It allows us to capture the dynamic interaction between…[EME asset returns and fund inflows] relying on a minimal number of assumptions about the overall model structure…using weekly data that span the period from June 2012 to early August 2014.”

“The possibility that asset managers and their ultimate investors destabilise EME asset markets is obviously highly relevant for policymakers. The current prudential regulation of the asset management industry mainly focuses on microprudential and consumer protection aspects and does not really address any issues that give rise to correlated behaviour across asset managers or the procyclicality of investor flows and asset prices.”