‘Reach for yield’ describes regulated investors’ preference for high-risk assets within the confines of a rule-based risk metric (such as credit ratings or VaR). Bo Becker and Victoria Ivashina provide evidence that U.S. insurance companies act on this principle and show that ”conditional on ratings, insurance portfolios are systematically biased toward higher yield bonds”. ‘Reach for yield’ would be a form of regulatory arbitrage, a source of inefficiency, and a reward for “unaccounted risk” of securities and issuers.

“Financial intermediaries and investment managers that are evaluated based on imperfect risk metrics face an incentive to buy assets that comply with a set benchmark but are risky on other dimensions; in other words, they have an incentive to “reach for yield”.

“Reaching-for-yield is a broad phenomenon that is not limited to any specific asset class, but it is likely be more pronounced for illiquid and complex securities for which risk measurement is particularly problematic…Capital requirements that reflect default risk but not co-variances can generate an incentive to acquire assets with high systemic risk. Rajan (2010) points to the presence of incentives for financial intermediaries to give an appearance of superior performance that leads them to take on tail risk (e.g., earthquake insurance) in times when financing is plentiful.”

“We focus on insurance companies, the largest institutional holder of corporate and foreign bonds. According to the U.S. Flow of Funds Accounts, in 2010, their holdings represented USD2.3 trn, or more than bond holdings of mutual and pension funds taken together. Regulation requires insurance companies to maintain minimum levels of capital on a risk-adjusted basis, often called “RBC” or risk-based capital. To determine the capital requirement for credit risk, corporate bonds are sorted into six broad categories…based on their credit ratings.”

“The central hypothesis is that insurance companies may attempt to increase the yield in their bond portfolio through taking on extra priced risk, while leaving capital requirements unaffected…Figure 1 Panel A shows that, consistent with risk-weighted capital requirement, insurance companies exhibit a strong preference for safer bonds. However, just the opposite is true within regulatory risk categories (Figure 1, Panel B). For securities rated AAA, AA, A or BBB (NAIC risk category 1 and 2) insurance companies hold 63% of all bonds held by insurance companies, pension or mutual funds in the lowest yield quartile, but 86% in the highest yield quartile. The result is very similar for CDSs…Also, while Figure 1 looks at the investment decisions at issuance; we find similar results using secondary market trading.” 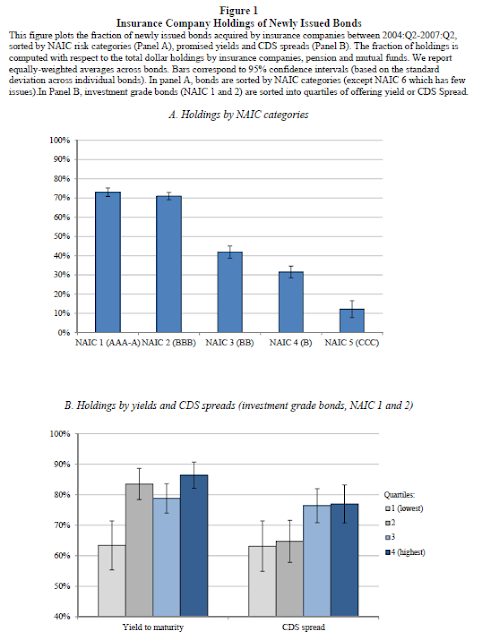 “We find that bonds preferred by the insurance companies have lower returns (although significantly so only in some specifications), higher volatility in and higher exposure to market returns (beta). This confirms that insurance firms get higher yields by assuming risk.”

“It is commonly believed that reaching for yield contributes to the cyclicality of credit supply and, therefore, to the real economic cycle. Consistent with this statement, we find that reaching-for-yield is pro-cyclical, disappearing in the second half of 2007 and coming back in 2009. We further provide evidence for two channels through which reaching-for-yield appears to affect the broader economy. Specifically, periods of reaching for yield by insurance companies appear to lead to higher issuance of risky assets by corporations.”