A new IMF paper illustrates the changed realities of public macro policy. In times of negative shocks at the zero bound for interest rates, fiscal policy is best suited for stabilizing economies. Monetary policy takes on a support role, securing funding conditions and financial stability. As a side effect of this policy mix, sovereign risk has emerged as a major concern in advanced economies. This suggests that in times of recovery it will also be fiscal rather than monetary tightening that dampens economic growth and overheating.

“The crisis has provided evidence that fiscal policy is an appropriate countercyclical policy tool when monetary policy is constrained by the zero lower bound, the financial sector is weak, or the output gap is particularly large…Before the 2008–09 crisis, the consensus view was that fiscal policy should play a limited role as a stabilization tool. Monetary policy was seen as a sufficient tool for short-term macroeconomic stabilization…New research points to large fiscal multipliers when economic conditions resemble those prevailing in advanced economies in the post-crisis period.”

“Coenen and others (2012) quantify the effect of the ZLB on fiscal multipliers based on seven macroeconomic models developed at six policy institutions. In all seven models, fiscal multipliers associated with various fiscal instruments rise substantially at the ZLB [zero lower bound of interest rates]. Based on data for 27 economies during the 1930s—a period during which interest rates were at or near the ZLB— Almunia and others (2010) conclude that fiscal multipliers were about 1.6. For the current crisis, Blanchard and Leigh (2013) argue that fiscal multipliers have been above 1 in economies at the ZLB, at least in the early years of the crisis, based on the relation they find between growth forecast errors and fiscal consolidation forecasts for these economies.”

“A key feature of the crisis has been the reduced availability of credit to households and firms…More limited access to credit implies that consumption and investment depend more strongly on current than on future income. Therefore, fiscal policy changes, by affecting current income, have larger multipliers in economies characterized by tighter credit constraints.”

“For fiscal policy to be truly effective as a countercyclical tool, a number of additional conditions, beyond positive fiscal multipliers, need to be satisfied. First, fiscal authorities should have room to maneuver so that the increase in debt associated with a fiscal expansion does not trigger a sovereign debt crisis… Second, fiscal authorities should have the ability to respond to economic developments in a timely and temporary manner… The experience with discretionary fiscal policy since the crisis demonstrates that policymakers can rapidly deploy substantial fiscal stimulus. After the failure of Lehman Brothers in September 2008, it became clear that the global financial sector was suffering a shock of a magnitude unprecedented in the postwar period. Fiscal policymakers in most advanced economies passed fiscal stimulus packages by the end of 2008—a relatively fast pace for discretionary fiscal policy, albeit slower than that of monetary policy.” 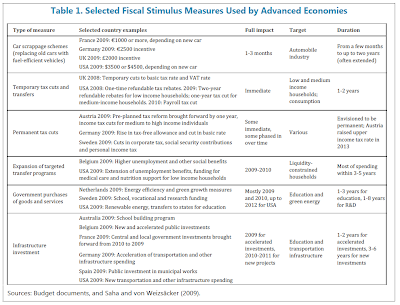 “Pre-crisis views about the interaction between monetary and fiscal policy have also been challenged by the surge in central bank purchases of government debt. This has helped restore financial market functioning….In principle, a central bank can prevent a bad equilibrium [a vicious circle of rising yields and default risk] by committing to provide liquidity to the sovereign bond market to facilitate its monetary policy objectives.”

The emergence of sovereign risk in advanced economies

“The sovereign debt crisis in the euro area has shown that the pre-crisis belief that advanced economies were not at risk of a fiscal crisis was misplaced…Assessments of fiscal sustainability—traditionally rooted in headline fiscal balances and debt ratios—are now being reconsidered to take better account of the underlying (structural) fiscal position, the likelihood of events that could threaten fiscal sustainability, and the speed with which markets’ perceptions of sovereign risk can change.”

“In Ireland and Iceland, bank rescues drove an (unexpected) increase in the debt ratio of 41 and 43 percentage points of GDP, respectively. These two cases illustrate that even levels of debt well below what was considered prudent before the crisis may not be “safe” in the face of large potential contingent liabilities…The official debt ratio fails to reflect contingent liabilities, which are often underestimated until they materialize. This argues for a much lower “safe” debt level than was thought necessary before the crisis.” 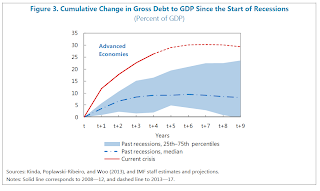