Brunnermeier and Sannikov illustrate in a formal model why fundamental risk and asset market volatility can be out of sync. They focus on endogenous market dynamics, such as “collateral amplification” (the mutual reinforcement of credit conditions and asset values). These endogenous dynamics imply that [i] low-risk environments foster systemic risk, [ii] market reactions to negative fundamental shocks are non-linear (i.e. can become catastrophic when the shock is large) and [iii] financial market risk can de-couple from fundamental risk.

The below are excerpts from the (somewhat technical) paper. Cursive text and underscores have been added.
The chart at the end is not part of the paper but a complementary illustration from a Goldman Sachs research report.

The two types of risk

“Due to highly nonlinear amplification effects, the economy is prone to instability and occasionally enters volatile crisis episodes. Endogenous risk, driven by asset illiquidity, persists in crisis even for very low levels of exogenous risk….The amplification through prices works through adverse feedback loops, as declining net worth of levered agents leads to [deleveraging and] a drop in prices of assets concentrated in their hands, further lowering these agents’ net worth.”

“Whatever the exogenous risk, it is normal for the system to sporadically enter volatile regimes away from the steady state…In fact…low-risk environments are conducive to greater build-up of systemic risk…. Endogenous leverage determines the distance to crisis. Securitization and derivatives contracts that improve risk sharing may lead to higher leverage and more frequent crises.”

The modelling of endogenous market dynamics

“The core of our model has two types of agents: productive experts [representing leveraged agents such as companies, banks of financial investors] and less productive households. Because of financial frictions [representing constraints on leverage, capital ratio, etc.] the wealth of experts is important for their ability to buy physical capital and use it productively…Physical capital can be traded in markets, and its equilibrium price is determined endogenously by the agents’ wealth constraints.”

“In normal times, the system is near the stochastic steady state: a point at which agents reach their target leverage… The most important phenomena occur when the system is knocked off balance sufficiently far away from the steady state….[In this context] shocks…capture changes in expectations about the future productivity of capital…For example, when a company reports current earnings, it reveals not only information about current but also future expected cash flow.”

“Experts…require positive net worth to be able to absorb risks… If the net worth of an expert ever reaches zero, he cannot absorb any more risk, so he liquidates his assets…The total risk of [expert] position consists of fundamental risk due to news about the future productivity of capital and endogenous risk due to financial frictions in the economy…Equilibrium prices to fall after negative macro shocks, because those shocks lead to expert losses and make them more constrained… The difference between the first-best price…and the liquidation value determines the market illiquidity of capital, which plays an important role in equilibrium.”

The consequences of endogenous market dynamics

“Second, the system’s reaction to shocks is asymmetric. Positive shocks at the steady state lead to larger payouts and little amplification, while large negative shocks are amplified into crisis episodes resulting in significant inefficiencies, disinvestment, and slow recovery.”

“Third, endogenous risk, i.e., risk self-generated by the system, dominates the [market] volatility dynamics and affects the experts’ precautionary motive [purchase or sale of assets to balance expected benefits and risks of leverage]. When changes in asset prices are driven by the constraints of market participants rather than fundamentals, incentives to hold cash to buy assets later at re-sale prices increase. The precautionary motive leads to price drops in anticipation of the crisis and to higher expected return in times of increased endogenous risk.”

The below chart has been taken from a separate Goldman Sachs report (Top of Mind, Issue 24, June 25, 2014) and illustrates that S&500 volatility has seen its peaks and troughs not necessarily in sync with events of fundamental uncertainty such as wars or even economic crises. 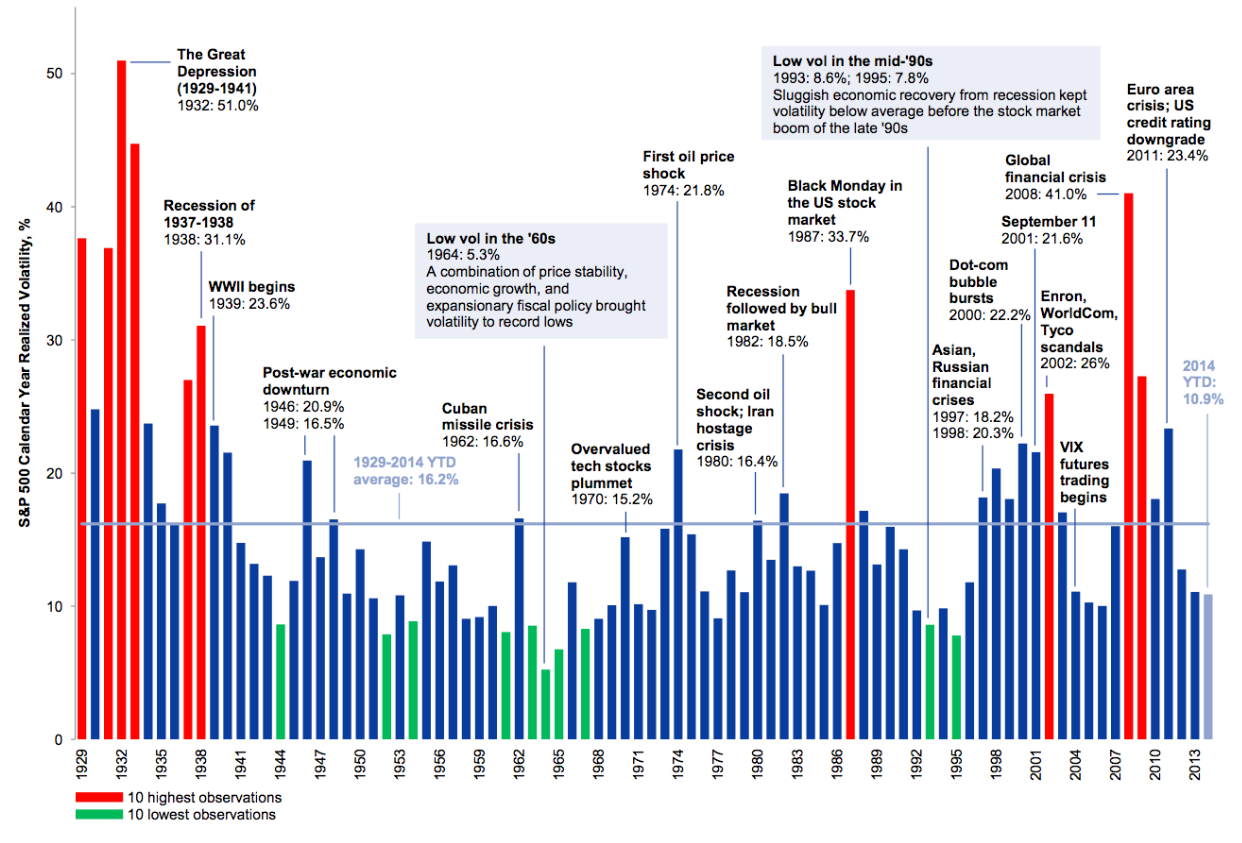