J.P. Morgan’s David Fernandez points out that central bank “tapering” (moderation of balance sheet expansion and related monetary accommodation, currently envisaged by the U.S. Federal reserve) has a precedent of sorts. Emerging Asia had ramped up central bank assets for a decade after the 1997-98 crisis, mainly though FX interventions to bolster financial stability and competitiveness. Asia has been unwinding part of that expansion, passively and in line with smaller external surpluses, since 2008. The initial balance sheet expansion did not undermine credibility and price stability. And the subsequent reduction may be interpreted as a positive normalization, reducing the risk of financial bubbles.

“For many years, EM Asia central bank balance sheets have been very large, making those in the G-4 look relatively modest in comparison. For China, Malaysia, and Thailand, they are equivalent to about one-half of GDP. Balance sheets of central banks in Korea and the Philippines are somewhat smaller, but still exceed one-third of GDP and so are larger than in most DM countries.”

“The rapid expansion of balance sheets in EM Asia after the 1997-98 financial crisis was driven almost entirely by the buildup of net foreign assets… Initially, much of this expansion reflected efforts to bolster precautionary reserves and to avoid a repetition of the trauma that came with the Asian crisis. Reserves rose to levels well above the traditional reserve adequacy thresholds…Subsequently, reserve accumulation was the result of foreign exchange intervention aimed at resisting currency appreciation and maintaining external competitiveness.”

“More recently, some EM Asian central bank balance sheets have begun to contract in terms of GDP. In China, central bank assets peaked at 68% of GDP in 2008, but have gradually dropped to 56% at end-2012.” 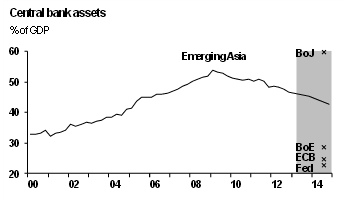 “Economic theory usually relates the expansion of the balance sheet of a central bank to an increase in inflation. In Asia, however, inflation has remained fairly low and well-anchored. Central banks have maintained their credibility, and there has been little correlation between the expansion of central bank balance sheets on the one hand and inflation and base money growth on the other. Reserve accumulation has been funded through increases in required reserves and the issuance of central bank sterilization instruments, which has contained reserve money growth.”

“Even if the monetary base only grows in line with economic activity and inflation is kept under control, financial stability risks can still arise. There are limits to the effectiveness of sterilization operations. In periods of strong economic growth or low global risk aversion, there are likely to be strong incentives for banks to sell or leverage the highly liquid sterilization instruments on their balance sheets. The strong correlation between credit and foreign reserves in many EM Asian countries supports this assertion. Financial stability concerns may not have materialized in Asia so far, but risks of asset price bubbles are currently evident in some housing, equity, and credit markets.”

“By holding large foreign exchange reserves, central banks expose themselves to exchange and interest rate movements, especially the appreciation of the domestic currency….Sterilization losses and currency appreciation have undermined bank equity in some countries. In Indonesia, the Philippines, and Thailand, there had been a drift in central bank equity and reserves since the mid-2000s. The financial positions of the central banks of the Philippines and Thailand in particular appear to be under considerable stress.”

“Looking ahead, a further contraction of central bank balance sheets across EM Asia would be a strong positive signal that inflation and financial stability risks are receding. This will depend on continued success in rebalancing away from dependence on external demand…”

“As there were stark contrasts in the expansion of EM Asia versus DM central bank balance sheets, there will be different dynamics in the tapering process. In the case of EM Asia, the tapering is already being delivered ‘passively’ via lower balance of payments inflows, in particular, smaller current account surpluses. In the case of DM central banks, they will be actively managing their asset purchase programs. It seems more likely that the DM central banks, once they begin this process, will taper at a faster pace, implying a slower pace of EM Asia FX appreciation or perhaps even depreciation.”