A  paper by Bruno and Shin illustrates how global banks drive lending booms in local currency markets. Most importantly, they explain how currency strength fuels rather than curbs financial expansion in small and emerging economies, leading to escalating dynamics. Conversely, dollar strength can trigger a tightening spiral. Empirical evidence seems to support the point.

“[We] construct a model of global liquidity built around the operation of international banks. We build on recent advances in understanding the leverage cycle of banks in which leverage builds up in booms and falls in busts. The leverage cycle mirrors the fluctuations in collateral requirements (increased haircuts) during downturns… In particular, we construct a double-decker model of banking where regional banks borrow in US dollars from global banks in order to lend to local corporate borrowers. In turn, the global banks finance cross-border lending to regional banks by tapping US dollar money market funds in financial centres.”

“[There is a] link between local currency appreciation and loosening of financial conditions through the build-up of leverage in the banking sector. The channel is through shifts in the effective credit risk faced by banks who lend to local borrowers that may have a currency mismatch [local-currency revenues and USD liabilities]. When the local currency appreciates, local borrowers’ balance sheets become stronger, resulting in lower credit risk and hence expanded bank lending capacity. In this way, currency appreciation leads to greater risk-taking by banks… our results shed light on why dollar appreciation constitutes a tightening of global financial conditions, and why financial crises are associated with dollar shortages.”

“The combination of the rapid growth of the banking sector fuelled by capital inflows and an appreciating local currency has been a classic early warning indicator of emerging economy crises. Gourinchas and Obstfeld (2012) conduct an empirical study using data from 1973 to 2010 and find that two factors emerge consistently as the most robust and significant predictors of financial crises, namely a rapid increase in leverage and a sharp real appreciation of the currency.”

“Our sample for the panel investigation draws on data from 46 countries, encompassing both developed economies and emerging/developing economies [apparently mostly from 1999 to 2011].”

“Capital flows through the international banking system have been a substantial proportion of total cross-border debt flows… [The figure below] shows the classification of cross-border debt liabilities by type of counterparty. We see that cross-border liabilities where both the creditor and debtor are banks is the largest of the four possible categories, and saw rapid increases in the run-up to the 2008 crisis.” 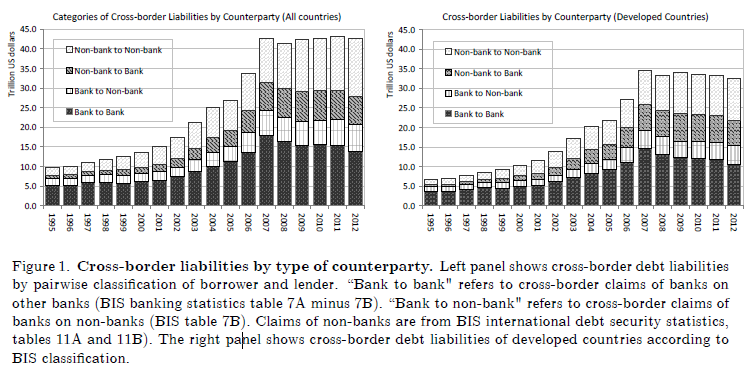