“The Financial Stability Forum (FSF, 2009) refers to pro-cyclicality as ‘the dynamic interactions (positive feedback mechanisms) between the financial and the real sectors of the economy. These mutually reinforcing interactions tend to amplify business cycle fluctuations and cause or exacerbate financial instability.’ As the global financial crisis has reaffirmed, this instability can easily feed through into the real economy…The banking sector is especially prone to this pro-cyclicality, as high leverage, in combination with rigid market-based risk management systems and capital requirements, triggers a tightening of credit standards in an economic downturn.” 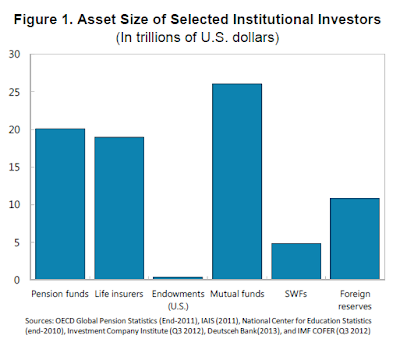 “In theory, [long-term investors] should be able to avoid the pitfalls of herding, which tend to hurt performance in the long run. Recent financial stress episodes have, however, demonstrated that various types of institutional investors are not immune to herd behaviour…” 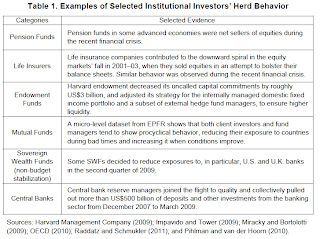 Pension funds: “Many defined contribution pension funds with rate of return guarantees tend to have similar benchmarks, thereby creating an incentive for herd behavior…According to the World Economic Forum (2011), these institutions feel that their countercyclical role in the markets has begun to change as regulatory and accounting changes (e.g., mark-to-market accounting and strict solvency regimes) have forced institutions to be concerned with short-term changes in market prices. Therefore, the investment strategies and behaviours of these institutions have become more pro-cyclical.”

Endowments: “Following Yale and Harvard…many endowments allocated an increasing share of their portfolios into illiquid assets such as private equities, hedge funds, and real assets. However, the global financial crisis caused large losses and a shift of their strategies away from illiquid assets….In late 2009, Stanford Management Company tried to sell up to USD1 billion of its USD6 billion in illiquid investments. Although this sale plan was not implemented, it implicitly shows the endowment fund’s need for more liquidity and a portfolio adjustment.”

Mutual funds: “Data on flows in and out of various mutual funds show that ample liquidity and low financial market volatility during the pre-crisis period increased investors’ risk tolerance and led to continuous inflows to mutual funds. However..there was subsequently a clear pattern of rapid drawdowns from mutual funds, especially after the collapse of Lehman Brothers in September 2008…Data show more volatility in equity funds than bond funds during this period…Raddatz and Schmukler (2011) analyze micro-level data on mutual funds and find that both client investors and fund managers tend to show pro-cyclical behavior, reducing their exposure to countries experiencing turmoil during bad times and increasing it when conditions improve…”

Sovereign Wealth Funds: “The long-term investment strategy of non-budget stabilization Sovereign Wealth Funds enabled most of them to maintain their stance on asset allocations during the crisis. However, Miracky and Bortolotti (2009) describe how several SWFs decided to reduce exposures to, in particular, U.S. and U.K. banks in the second quarter of 2009. In retrospect, these SWFs may have liquidated part of their holdings at the worst possible moment.”

Central banks: “The primary objectives of reserve management are safety (i.e., preserving the value of the reserves) and a high degree of liquidity. McCauley and Rigaudy (2011) document how exposure to government-sponsored enterprises (GSEs) was reduced and securities lending programs were scaled back. Reserve managers’ investment in assets under market pressure was also reduced when credit rating downgrades breached the minimum level for inclusion. The debt crisis in the euro area has also had a profound impact on the composition of reserves. Pringle and Carver (2012) find that central banks reduced their holdings of some euro area issuers’ debt or exposure to the euro more broadly.

Underestimation of liquidity needs: ” Long-term investors sometimes face short-term liquidity needs. For example, central banks hold all or part of their foreign reserves in short-term liquid assets because reserves may need to be mobilized to provide necessary foreign currency, (e.g., during a BoP crisis or for servicing external debt). Also, the open-ended structure of mutual funds means that client investors can redeem their shares on short notice, which leads fund managers to maintain a certain level of liquid assets…From an individual investor’s point of view, piling up sufficient cash can be a costly approach, lowering the asset manager’s short-term performance and. sending a negative signal to clients about the manager’s capability. These constraints lead asset managers to underestimate liquidity buffer needs.”

Difficulties in Assessing Market Risk: “A traditional risk measurement system does not see risks ‘through the cycle’ and leaves investors vulnerable to rising risk premiums and higher volatility if market liquidity dries up…In the wake of the crisis… materialization of many unprecedented and previously unthinkable scenarios (e.g., large global financial institutions’ failures, the euro area sovereign debt crisis, and the U.S. sovereign rating downgrade) have reshaped investor perceptions about safe assets and increased their concerns about tail risks.”

Manager Incentive Structures: “Benchmarks and annual performance targets often lead to a focus on short-term returns and thus reduce the investment horizon of the manager… although institutions may have long-term horizons, their asset managers may not necessarily have the same perspective owing to the nature of their compensation… Relative performance targets (index-based benchmarks or average returns in a peer group) stimulate herd behaviour.”

Reporting and Disclosure Policies: “In the mutual fund industry disclosure of underperformance on a quarterly or annual basis puts fund managers at risk of being dismissed. New fund flows are sensitive to past performance, and fund outflows lead to the liquidation of assets. This implies that asset managers who focus on long-term performance may not see long-term gains realized.”

Regulation and Market Convention: “Mark-to-market valuation-based accounting rules or rigid capital requirements may constrain long-term investors’ ability to ride out short-term volatility… The World Economic Forum (2011) argues that mark-to-market accounting and pension regulations are pushing pension fund managers away from long-term investing, and Solvency II and other regulations will discourage life insurers from making longer-term investments… the investment models used by many long-term institutional investors may be similar, which could be a factor contributing to herd behavior. Over-reliance on credit rating agencies can be a factor driving pro-cyclicality as credit ratings are embedded in regulatory requirements and various financial contracts.” The ECB and the option of large-scale asset purchases