Non-conventional monetary policy has inflated central banks’ balance sheets and compressed long-term yields. A new BIS paper makes some points on why reversing this portfolio effect is problematic. The financial system has much greater exposure to government bond yield risk than in the past. Spillover risks for private debt and emerging markets are elevated. And conflicts may arise between central bank and public debt management policies, increasing uncertainty for markets.

The below paragraphs are excerpts from the paper. Cursive lines and emphasis have been added.

“One legacy of the monetary policies pursued since the financial crisis is that central banks in most advanced economies now have exceptionally large balance sheets. And commercial bank reserves (“money”) have risen by several multiples…The consequences of the massive increase in long-term assets held by the central bank will last much longer, and are more uncertain, than changes in the policy rate.”

“Central banks have used their balance sheet to influence the long-term interest rate…The empirical evidence is that the Federal Reserve has been able to drive down the yield on 10-year US Treasuries. The term premium in core markets has been driven down to levels that are unsustainably low. This, and the substantial accumulation of interest rate risk on the balance sheets of financial firms, will confront policymakers with many difficult dilemmas once the exit from extraordinary monetary accommodation begins.” 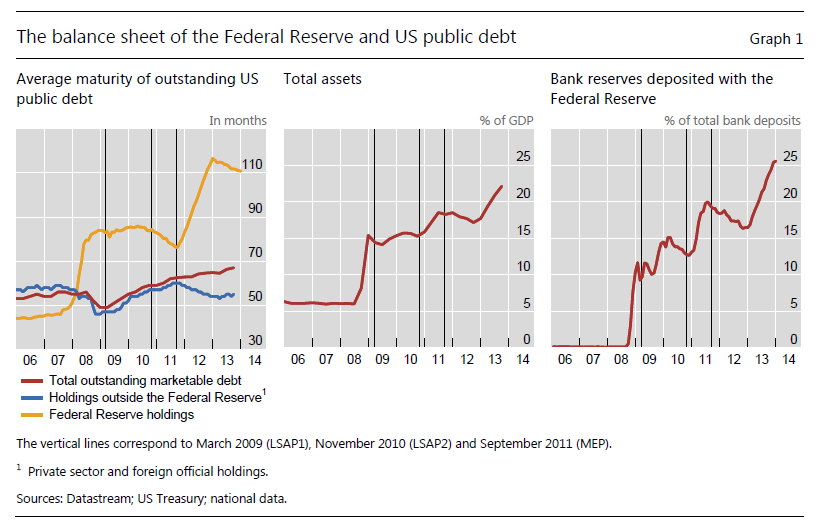 “For many years ahead, the balance sheets of central banks will remain much more extended…than is desirable in any normal equilibrium. Markets will therefore have to make judgments about how central banks would seek to adjust the size and composition of their balance sheets – over a period of years – to future macroeconomic or financial shocks. Markets will also have to assess fiscal policy: any prospect of chronic government overindebtedness will make it harder to sell government bonds.”

“[The graph below] shows how the term premium in US Treasuries [measured as the sum of inflation and real yield risk premia based on the BIS term structure model] has changed over the past 25 years. There appears to have been a trend-like decline since 2000, with the low or even negative readings during the most recent years. On the face of it, the idea from rational expectations theory that the term premium can be viewed as independent of central bank or government balance sheets has been discredited… Several event studies have shown that the announcements of large-scale central bank bond purchases in Japan, the United Kingdom and the United States have indeed lowered long-term rates.”

“[Other factors and public policies have augmented term premia compression:]

Risks of exiting from yield-compression policies

“[A] worry is that global net interest rate exposures…have risen substantially since the crisis. At the core of this is US Treasury debt outstanding held outside the Federal Reserve. This rose from USD3 trillion in early 2007 (yielding an average of 5%) to USD8 trillion (with an average yield of 1%) by mid-2013. The rise of government debt in other advanced economies… is well-known. Much of this risk is in the banking system: sovereign exposures accounted for 19% of total banking book exposures of large international banks in mid-2012, compared with 11% at end-2008.”

“Lower-rated corporations have also benefited from the negative or zero term premium in government debt markets, so credit risks have probably risen too. Furthermore, the link between US yields and yields on EM bonds has increased substantially over the past decade, and EM bond issuance has risen.”

“The scale of market turbulence in global bond markets from May to September 2013 demonstrates the importance in any correction of the outstanding stocks of assets. Quantities matter. The vastly increased volume of bonds outstanding, some held in leveraged portfolios, means that volatility will rise much more when market sentiment changes than it did in the past when outstanding stocks of bonds were much lower.”

“Since their liabilities have remained of very short maturity (typically bank reserves), central banks have a growing maturity mismatch. A sizable term spread gives the central bank a positive running yield: this has boosted its profits typically remitted to the Treasury, often creating a favourable impression with parliaments. But higher short-term rates could at some point lead to central bank losses.”

“The central bank controls the overnight rate but does not have sole jurisdiction over policy aimed at the long-term rate. This is because government debt management policies affect the maturity of government debt held by outside investors – that is, the private sector and foreign official investors – just as much as central bank market operations. Both the government and the central bank have the capacity through their transactions to alter the portfolios of assets held by the market. Given the imperfect substitutability of bonds with different maturities…this allows them to influence key interest rates at different points along the yield curve.”

“Government debt management was a key part of monetary theory and practice from at least 1930 right up to the 1980s… But from the mid-1980s, this began to change…With inflation becoming a pressing problem…an independent central bank with a long time horizon was seen as a solution…central banks were not allowed to finance governments and held only limited stocks of long-term government bonds… Government debt managers were therefore given a degree of independence and assigned clear objectives.”

The large-scale acquisition of government bonds by central banks as a result of the financial crisis has obviously undermined this separation.”