Federal Reserve Chairman Bernanke recently explained globally low long-term yields as a combination of anchored inflation expectations, negative real policy rates, and a compressed term premium. The latter is seen as the key development since 2010 resulting from (i) the surge in private demand in the wake of reduced nominal volatility and negative correlation with risk markets and (ii) a surge in public demand resulting from asset purchase programs and FX reserves replenishing. Bernanke emphasizes that the Fed, markets, and forecasters all expect long-term yields to drift higher by 50-75bps per year through 2017. Yet, actually his reasoning would make a sustained directional change in yields contingent on fading crisis and deflation fears.

“Long-term interest rates”, Ben S. Bernanke, 1 March 2013.
http://www.bis.org/review/r130306a.pdf?ql=1
“It is useful to decompose longer-term yields into three components: one reflecting expected inflation over the term of the security; another capturing the expected path of short-term real, or inflation-adjusted, interest rates; and a residual component known as the term premium.”

“The expected inflation component has drifted gradually downward for many years and has become quite stable….The expected average of the short-term real rate over the next 10 years has gradually declined to near zero over the past few years… the low level of expected real short rates may reflect not only investor expectations for a slow cyclical recovery but also some downgrading of longer-term growth prospects….Yields on inflation-indexed long-term government bonds for [Canada, Germany, the UK, Japan, and the U.S.] …show that expected real yields over the longer term are low in other advanced industrial economies as well. Note again the strong similarity in returns across these economies, suggesting once again the importance of common global factors.” 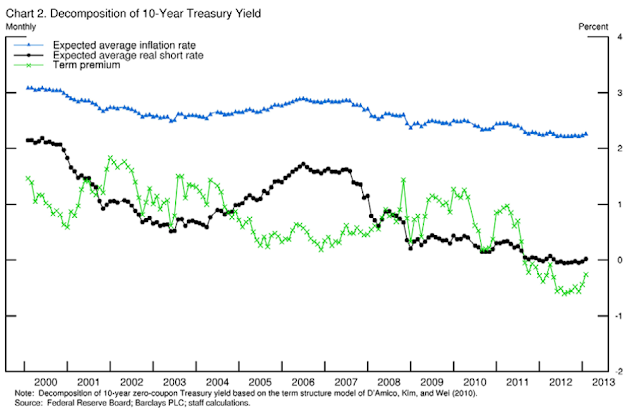 “The largest portion of the downward move in long-term rates since 2010 appears to be due to a fall in the term premium… defined as the residual component not captured by expected real short-term rates or expected inflation… In part, the term premium compensates bondholders for interest rate risk – the risk of capital gains and losses that interest rate changes imply for the value of longer-term bonds. Two changes in the nature of this interest rate risk have probably contributed to a general downward movement of the term premium in recent years. First, the volatility of Treasury yields has declined, in part because short-term rates are pressed up against the zero lower bound and are expected to remain there for some time to come. Second, the correlation of bond prices and stock prices has become increasingly negative over time, implying that bonds have become more valuable as a hedge against risks from holding other assets.”

“Beyond interest rate risk, a number of other factors also affect the term premium in practice.
(i) During periods of financial turmoil, the prices of longer-term Treasury securities are often driven up by so-called safe-haven demands of investors.
(ii) Even during more placid periods, global demands for safe assets increase the value of Treasury securities. Many foreign governments and central banks… hold substantial international reserves in the form of Treasuries.
(iii) Federal Reserve actions have also affected term premiums in recent years, most prominently through a series of Large-Scale Asset Purchase (LSAP) programs… To the extent that Treasury securities and agency-guaranteed securities are not perfect substitutes for other assets, Federal Reserve purchases of these assets should lower their [specific] term premiums… Accordingly, this portion of the decline in the term premium might ultimately be attributed to the sluggish economic recovery, which prompted additional policy action from the Federal Reserve.”

“If, as the FOMC anticipates, the economic recovery continues at a moderate pace, with unemployment slowly declining and inflation expectations remaining near 2%, then long-term interest rates would be expected to rise gradually toward more normal levels over the next several years. This rise would occur as the market’s view of the expected date at which the Federal Reserve will begin the removal of policy accommodation draws nearer and then as accommodation is removed. Some normalization of the term premium might also contribute to a rise in long-term rates.”

“While [public, private, and market] forecasts embody a wide range of underlying models and assumptions, the basic message is [that]long-term interest rates are expected to rise gradually over the next few years…to around 3% at the end of 2014 [and] a total…of between 200 and 300 basis points in long-term yields between now and 2017.”