A Nomura research report looks at the rising financial risk premium across Asia. It shows that economic fundamentals are not as bad as they were in 1996. However, Asia’s external surplus has been eroded by a torrid financial expansion, which was fueled by very easy monetary policy. In the absence of a correction of this policy stance, there is an increasing danger that capital outflows will trigger a sudden stop to these accommodative financial conditions.

“From the peak in 2007 to Q1 2013, current account surpluses have narrowed by more than 13pp of GDP in Hong Kong, Malaysia and Singapore and by 8-9pp of GDP in China, India and Thailand. The sharp narrowing swung the current accounts of India and Indonesia into deficits of 3.6% of GDP and 2.4% of GDP, respectively, in Q1 2013.”

“Asia’s average ratio of domestic private debt to GDP was 167% in 2012, significantly higher than in 1996 – and the property markets in most of these countries are frothy. It is not only the level of leverage, but also the speed of the buildup. In the four years since the global financial crisis, the ratio of private domestic debt to GDP has increased by over 50 percentage points (pp) of GDP in Hong Kong and Singapore, and between 30-40pp in Malaysia, Korea, China and Thailand. Based on the latest available data, domestic private credit is continuing to outpace nominal GDP in all countries but Korea.” 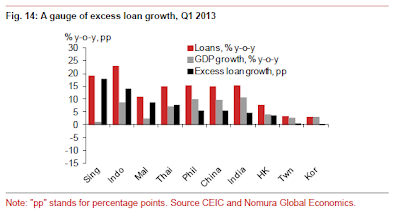 “It is striking that prices in many Asian property markets are tracking above those during the US price bubble. And, as in the US, these property price booms are leading to a hive of construction activity, which could turn into a supply glut in the event of a major correction in Asia’s property prices.” 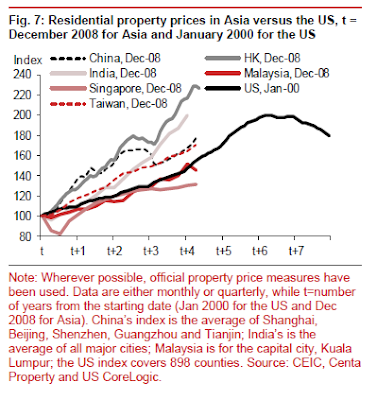 Excessively easy monetary policy“Asia’s central banks have kept policy rates too low for too long…Over the last seven years, China’s real (headline CPI adjusted) benchmark 1-year bank lending rate has been negative 55% of the time, while the GDP-weighted real policy rate for the rest of Asia has been negative 40% of the time.””We use six combinations of different measures of the output gap and inflation to obtain a range of possible Taylor rule-implied policy rates. The results show that policy rates in most countries have persistently been below the lower bound of our Taylor rule range.”

“Asia has come to rely increasingly on macroprudential tools in its attempts to contain credit and property market booms. But macroprudential tools are not the Holy Grail. These tools risk lulling central banks into a false sense of believing that policy has been sufficiently tightened only to find out that, over time, as loopholes are found, these tools have turned out to be a poor substitute for higher interest rates.”

Comparison to the 1990s Asian Crisis

“While Asia’s economic fundamentals have deteriorated since the global financial crisis, they are still much better than in 1996, but comparisons to 1996 may not be valid. To avoid future crises, the time to arrest the slide in the region’s fundamentals is now. As explained in the next section, this will require a move away from ultra-loose counter-cyclical policies and an increased focus on structural reforms. The one strong conclusion from this comparison is that, with the possible exceptions of India and Indonesia, balance of payments crises are much less likely, as Asia’s FX reserves are much larger than before the Asian crisis. Although, if remedial action is not taken soon, domestic financial crises in Asia will become more likely.” 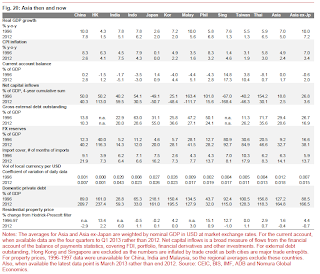