Since 2008, Bank delevering has been on of the key drivers of the euro areas poor economic performance and its vulnerability to recurrent financial crises. Barclays Cross Asset Research nicely summarized and discussed its main drivers, whose impact is widely seen as most intense in 2012 and maybe 2013. ECB and IMF research suggests that the deleveraging is ongoing and could eventually reach an equivalent of 10-30% of euro area GDP.

The drivers of euro area bank deleveraging
According to Barclays there are several reasons behind EU banks’ drive to deleverage in the wake of the U.S. subprime and euro area sovereign credit crisis:
The first relates to the deleveraging required by banks that accepted state aid in 2008 and 2009: these banks were forced by the European Commission to commit to deep restructuring plans with defined asset reduction targets to bring them back to viable and sustainable business models. Banks in this category, such as Royal Bank of Scotland, Lloyds, and Commerzbank can all demonstrate significant progress towards achieving these targets, although work remains to be done, particularly on less liquid assets.
According to Barclays, ”this restructuring process, which has been ongoing for over three years, is more than two-thirds complete, although further non-core run-off will occur.”

The second trigger was the European Banking Authority’s September 2011 exercise to determine if banks had enough capital when market prices of government bonds were considered. Banks were allowed to meet identified capital needs by either raising equity or reducing risk-weighted assets, and many did both. Banks in this category include Santander, BBVA, and Unicredit. Specifically, the European Banking Authority had identified a EUR115bn capital requirement at European banks, basing the assessment on a 9% core tier 1 ratio after adjustments for sovereign risk holdings. Banks that were calculated to have a capital shortfall, of which there were 37, had until 30 June 2012 to implement a capital raising plan. The actions largely focused on retaining earnings, liability management, conversions of non-qualifying capital instruments, or rights issues, but, there was also a significant component of balance sheet reduction. According to Barclays, this process had been complete by October 2012.

The third trigger was the looming requirements of Basel 3, which are particularly onerous on banks with large fixed income trading operations. There are two things to consider when thinking about the deleveraging occurring in response to Basel 3. The first is banks – particularly investment banks – shrinking their balance sheets in response to the enhanced recognition of counterparty risk in Basel 3 that leads to RWA inflation in fixed income trading businesses. The primary examples of banks responding to this with deleveraging are Credit Suisse and UBS. The second is banks shrinking their assets to improve their Basel 3 capital ratios faster in response to market and regulatory pressure.
Implementation of Basel 3 is scheduled to begin on January 1, 2013. While the deductions linked to qualifying capital and the transition periods for minimum ratios phase in slowly, the adjustments to risk-weighted asset calculations occur instantaneously. The phase-in period for many deductions and for higher minimum capital requirements is long, with full implementation not scheduled until 2018. Part of the rationale for this long phase-in period is to prevent unnecessary deleveraging of the banking system. Despite this, the market and regulators have been increasingly focusing on banks’ ‘fully loaded’ Basel 3 ratios, calculated as if the full standard was applied currently. On a fully loaded Basel 3 basis many banks are thinly capitalized, with ratios below the 8% that the market considers appropriate. For example, dealer inventories of fixed income assets have been plummeting, as shown below in primary dealer inventories of corporate bonds that have fallen 50% between 2011 and 2012.
According to Barclays, “banks with capital markets operations have deleveraged in anticipation of more onerous risk-weighted asset calculations under Basel 3…but Basel 3-relate deleveraging [is] to spread as banks face pressure from investors and regulators to achieve higher fully loaded Basel 3 capital ratios sooner.”

The fourth and final trigger of deleveraging were funding challenges, namely the withdrawal of USD liquidity from money market funds to European banks led BNP, Societe Generale, and Credit Agricole to announce deleveraging plans focused on reducing assets funded in USD. In 2011, almost 50% of all assets in US prime money market funds were invested in European banks. As the European debt crisis escalated in the second half of 2011, this concentration became a concern, and money market funds reacted by withdrawing some of their liquidity provision To facilitate this withdrawal in an orderly fashion, the ECB, in conjunction with other central banks, increased its provision of USD funding.We believe broader changes in the funding market, such as the elevated cost and reduced availability of unsecured debt, would have caused significantly more deleveraging if not for the exceptional liquidity being provided by the ECB.

The consequences of euro area bank develeraging
From the angle of policymakers such as the ECB,” a debt overhang had been built up in some EU countries during the pre-crisis period that is currently being corrected. Second, the financial crisis exposed…unsustainable features of some EU banks’ business models – such as a heavy reliance on short-term wholesale funding, overly complex group structures and insufficient capital buffers. Finally, the EU banking sector has been hit by a number of recent shocks, notably the US sub-prime crisis and the euro area sovereign debt crisis.”
“Owing to a multiplier effect, even a small capital shortfall can result in large deleveraging needs… For example, a capital shortfall of EUR100 bn could… require as much as a EUR1,250 bn reduction of risk-weighted assets and even more in terms of total assets. Deleveraging on account of funding shortfalls is not subject to a multiplier effect, but funding gaps can be more acute and need to be resolved within a short time span to avoid illiquidity turning into insolvency.”
Historical experience shows that leverage (the assets-to-equity ratio) and loan-to-stable funds ratios (proxied by loan-to-deposit ratios, owing to measurement problems) tend to decline significantly when a crisis hits the banking sector. In fact, the loan-to-deposit and leverage ratios of large banks in Europe may have much further to fall as they are well above the levels observed in the aftermath of previous banking crises. Loan-to- deposit ratios in the Finnish and Swedish banking sectors were over 120% at the onset of their respective crises at the beginning of the 1990s and fell by around 30 percentage points within three years. The Japanese and Norwegian banking sectors experienced declines of around 20 percentage points; the former from a relatively low level and over a period of seven years and the latter from a relatively high level and within three years.
By comparison, the loan-to-deposit ratio of the euro area banking sector has only declined by 6 percentage points since the beginning of the financial crisis and is 44 percentage points higher than the current level for US banks. From a historical perspective, a further downward readjustment of the amount of loans to be funded by non-deposit sources may therefore be expected (chart below). 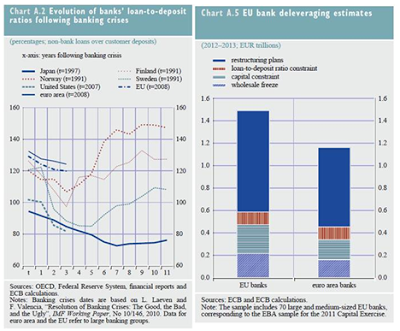 A number of large EU banks have announced significant medium-term restructuring plans aimed at improving capital ratios and decreasing reliance on wholesale funding. These plans include asset reductions of approximately EUR1,600 bn (around EUR1,000 bn for euro area banks) over the next three to four years (9-10% of EU GDP). Although some banks have already made considerable progress in achieving their targets, the potential additional impact on total EU banking assets remains sizeable over the medium term. It should be noted that a bank’s plans are considered in isolation; therefore, the impact at the aggregate level will be reduced if the assets are purchased by other EU/euro area banks.
A broad assessment of the deleveraging needs of EU banks until the end of 2013 should take into account the range of possible sources of deleveraging:

The IMF estimates that large EU banks would reduce assets by USD2200-3800 billion (12-21% of EU GDP) from 2011Q3 to 2013Q4. Indeed, assets fell by more than USD600 billion in the period from 2011Q3 to 2012Q2 (3-3.5% of GDP) with much of the decline occurring in 2011Q4. Since then, following efforts by the ECB to relieve funding pressures, the pace of deleveraging has slowed. To date, the decline in bank leverage has been mainly due to capital measures and asset disposals; cutbacks in bank loans have played a smaller role.