The Federal Reserve’s forward guidance and maturity extension policies demonstrated how non-conventional monetary policy operates through both “signaling effects” and “portfolio effects” Forward guidance reduced yields beyond the guidance period. It was treated by markets as a broader commitment to lasting accommodation, underscoring the power of signaling. The Maturity Extension Program, by contrast, raised shorter-dated rates, even within the forward guidance window, illustrating the general importance of the “portfolio effect”.

“We examine the efficacy of two policies introduced by the Federal Reserve designed to reinforce its commitment to an accommodative monetary policy in the aftermath of the financial crisis. In August 2011, the Federal Open Market Committee (FOMC) first provided date-based guidance on the anticipated minimum amount of time that it expected the federal funds rate would remain at an extraordinarily low level (which we refer to as the guidance period). Under the Maturity Extension Program (MEP), first announced in September 2011, the Federal Reserve sold Treasury issues maturing within three years and purchased securities with more than six years to maturity.”

“The first guidance announcement signaled the path of short rates over the following two years. The second guidance announcement extended the signal by one and a half years and the third announcement added an additional half year. The announcements were writ in general terms (to “mid-year” or “year-end”), leaving room for interpretation… The guidance on the FOMC’s expectations of the duration of low short-term interest rates is an unambiguous example of signaling.”

“The MEP was introduced in September of 2011, with an initial end date of June 30, 2012 and extended to the end of 2012 at the FOMC’s June 2012 meeting. The MEP offset purchases of long-dated Treasury securities with sales of short-dated Treasury securities. The first statement, in September 2011, set a pace of USD44 billion per month of purchases [3.5% of GDP annualized] and sales to be conducted through June of 2012. Eight days before the program would have terminated, on June 22, 2012, the FOMC announced a continuation of the program…the [continuation] was smaller [USD270 billion on aggregate versus USD400 bn] and offered no hope of expansion since, by program completion, the Federal Reserve’s holdings of short-dated securities would be near zero.”

“We consider the effects of sales and guidance on large standardized market rates: Treasury securities, overnight index swaps (OIS), and plain vanilla interest rate swaps. By looking across these markets, we can see the effectiveness of the transmission of the FOMC’s guidance across markets and the potential transmission, presumably in the opposite direction, of the pressure from Treasury sales.”

“The guidance announcements, which stated the FOMC’s expectations of low rates for two to three years, had pronounced effects on securities with maturities greater than the periods covered by the announcements…Directional changes in yields are consistent with expectations [chart below]. Guidance should work to damp the risk of holding longer maturities, and indeed guidance impacts are observed both within the period of guidance (thicker portion of gray lines) and beyond the guidance window (thinner portion). This is particularly true for the first guidance announcement where one observes a five year yield change twice the magnitude of that for the end of the guidance coverage period (roughly two years beyond the announcement date.” 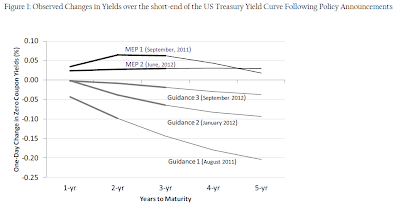 “Our findings suggest that the MEP did raise rates modestly at the short end of the curve and that the increases were not significantly different for the sales of securities within the guidance windows than they were for securities with maturities that extend beyond the guidance windows, suggesting a high degree of substitutability within the relatively narrow maturity range that we examined. Similarly, market participants did not distinguish between maturities within and outside of the guidance period…Assuming the date-based guidance was viewed by market participants as a commitment to the path of short rates, the increases in rates associated with the MEP sales provide evidence that yields are composed of more than the arbitrage-free rate of return.”