A recent BIS working paper reminds us that the securitized credit and euro area sovereign credit crises have structurally diminished the world’s reserves of perceived safe assets. As safe assets are essential for institutional finance (pensions, insurances) and transactions (collateralization) their continued shrinkage would propagate a financial sector meltdown. This is why persistent negative real interest rates on sovereign and central bank liabilities are a critical stabilizer: they increase safe asset supply, reduce demand, and stabilize the finances of sovereign borrowers. Central banks play the lead role in sustaining this real rate compression, as they have often done in history.

“The notion that the global economy could be faced with a shortage of safe assets has become a significant theme in recent policy debates…Markets for collateralized transactions (repos) would collapse, financial institutions would have difficulties meeting their prudential requirements, and the well-functioning of riskier segments of the financial system could be derailed…households, retirees and firms would live in a world without a suitably safe store of value.”

Why are safe assets so important? “A bond with a zero default risk is information insensitive in the sense that its value depends only on the yield curve up to the maturity of the bond, and not on the characteristics of the issuer. Once this bond has been certified as safe (for example by a credit rating agency), investors can agree about the value of the bond without collecting further information about its issuer. Information insensitiveness implies that there is no informational asymmetry about the asset, so that its market will not be affected by illiquidity coming from adverse selection problems.”

How did safe asset scarcity come about? “The rapid economic growth of emerging economies, coupled with a relative backwardness in financial development [had] created a global shortage of stores of value [in the 2000s]…This growing external demand for safe stores…proved a powerful stimulant for [manufacturing] large amounts of `private label’ safe assets through the securitization of riskier assets. The global financial crisis arose when many of these `private label’ safe assets [securtitized claims with a AAA rating] lost that quality…. In the euro area, the strains associated with the crisis quickly morphed into concerns about the safety of sovereign debts..”

The authors address the key question: “Could [a] destabilizing feedback loop lead to the ultimate disappearance of safe assets, recognition that nothing is really safe, with potentially disastrous consequences for financial stability?” Their main conclusion is that the reduction of real interest rates, as consequences of a new market equilibrium and monetary policy action, will be stabilizing and possibly avert an escalating dynamics. 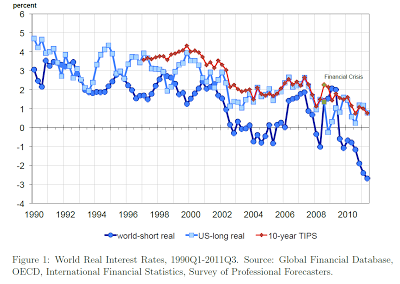 “The decline in the natural rate [of interest]…increases the market value of existing assets, hence their supply. Simultaneously, it improves the solvency of borrowers, especially sovereign ones. In addition, the mechanism [stimulates] the supply of additional stores of value, i.e. borrowing….
It is the tension between the fragility induced by the additional leverage, and the stabilization induced by the additional supply of stores of value that is of interest.”
“Monetary policy will be important along two margins. First, it will need to accompany the decline in the natural rate that occurs when the scarcity of stores of value becomes more acute. Second, monetary policy can also play an important role as a backstop for public securities… this backstop can increase significantly the safety of public securities, with minimal or no consequences in terms of price stability.”
“One could indeed try and develop a history of central banking from the perspective of the supply of safe assets. Central banks such as the Bank of England or the Banque de France were originally created to be the banks of the sovereign and the managers of the sovereign’s debt. Central banks then assumed the responsibility of maintaining banking stability during the nineteenth century, with the development of the lending-in-last-resort doctrine by Walter Bagehot, a conception of central banking that inspired the creation of the US Federal Reserve in 1913. Thus, one could argue that central banks were created to make government debt a safe asset, and that this role was later extended to the liabilities of private banks.”
“The relevant question is not whether the world economy can suffer from a shortage of stores of value. Through endogenous and self-correcting macroeconomic responses, the economy as a system will strive to compensate for any shortage. The more interesting question lies in the composition of this asset supply and how to make it less fragile.”