Leveraged China
Morgan Stanely Asia Credit Strategy, May 3, 2013
“A combination of rapid credit growth and a sluggish economic environment in the past year has pushed corporate leverage to record highs in China…The broadest quality measure of corporate leverage (MSCI China’s non-financial corporate universe) reached an all-time high of 3.1x (gross debt/EBITDA), driven by SOEs (4.6x), more than a turn higher than during the 2008 downturn, and to a lesser degree private sector corporates (2.8x) still short of the 2008 levels.” 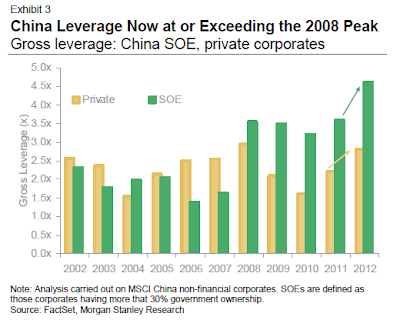 “Leverage is increasing partly because credit conditions have been easy. Chinese banks extended credit aggressively in 2012, taking the credit multiple (China bank asset growth to nominal GDP growth) to 2.3x. That’s the fastest pace since the government-sanctioned credit boom in 2009, with the difference being that much of the credit expansion is through banking ‘innovations’.”

“The credit quality of Corporate China is deteriorating and is now at a point where we think it’s going to become a headwind for further outperformance…The fastest credit quality deterioration is in the parts that dominate credit markets: SOEs, industrials and to some extent property…All three are key components of the traded bond universe, together accounting for more than 20% of the total risk in Asia credit and over 85% of the risk contribution from China: SOE (IG) leverage increased by a turn, private sector industrial leverage (HY) by 0.8x and property (HY) by 0.7x.”

“The bulk of leverage sits with SOEs who, on average, also generate less return on assets…SOEs’ debt raising today is mainly about plugging a fairly persistent funding gap. Growth is sluggish and the capex trend is moderating but the funding position (defined as starting cash less short-term debt plus free cash flows over the year) for SOEs began to deteriorate in 2010, turned negative in 2011 and continued to worsen in 2012.” 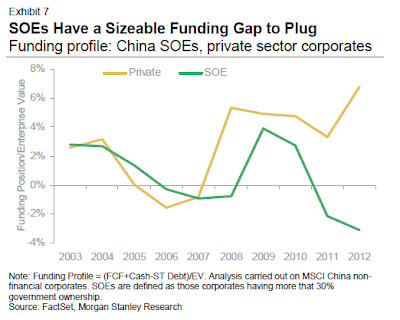 “Our own data suggest that total debt/GDP in China is approximately 232% with corporate debt/GDP at 106%, which puts China’s corporate debt/GDP in line with Europe but higher than US or Asia ex-Japan ex-China ..To gauge credit quality, we prefer focusing on bottom-up data from individual corporate statements. Pairing debt with the cash flows that service it, China’s SOE leverage today is 3x higher than what it was in 2007 on the eve of the last downturn, while only marginally higher for the private sector universe. That suggests that if China had a recession today, the credit fallout – in the sense of companies finding it difficult to service debt – would most likely be worse than in 2008.” 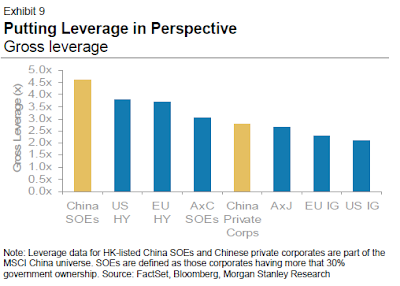