Hagendorff and Vallascas argue that the risk weights used to calculate banks’ capital adequacy fall significantly short of true portfolio risks. Capital arbitrage may have undermined Basel II capital regulation and could do the same for Basel III in the future.

The below are excerpts from the post and papers. Cursive text and emphasis has been added.

The issue at stake

“The financial crisis that started in 2007 illustrates that capital-adequacy rules have failed to ensure that banks’ capital holdings are in line with the riskiness of their assets. This is true despite numerous refinements and revisions over the last two decades.”
“The Basel Accord of 1988 introduced minimum capital standards as a fixed proportion of the risk exposure of a bank, as measured by risk-weighted assets. In most countries, the minimum capital requirement is 8% of risk-weighted assets… [Risk-weighted assets denote] the weighted sum of various on- and off-balance sheet exposures…[which] has become more comprehensive over time to include market risk and operational risk… Underlying Basel is the notion that the risk weights assigned to each asset class reflect the associated economic risks. Thus, a key question is whether this regulatory measure of bank portfolio risk is reflective of the true portfolio risk of a bank. If not, banks will try to game the system by investing in risky assets which maximize returns while reducing capital requirements.”
Evidence of inappropriate risk weights 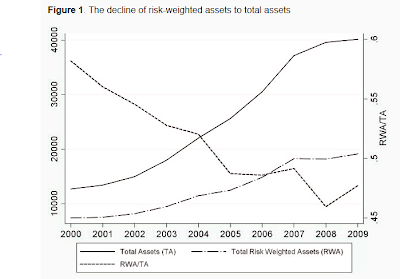