Credit Suisse’s Dong Tao and Weishen Deng nicely summarize causes, size, and systemic risks arising from China’s rapidly growing shadown banking sector. Low regulated bank interest rates and rationed supply of credit have created ample incentives to by-pass the regular banking channels. By end-2012 the shadow banking sector has soared to about 44% of GDP and continues expanding at a torrid pace. Meanwhile, poor transparency and lack of risk management and regulation bode ill for credit and liquidity risks, and even a state bailout could involve a drastic deterioration of credit conditions.

On size and characteristics
“Shadow banking activity in China has surged in recent years. We estimate its total size at CNY22.8 trn, 44% of GDP. We estimate it counts for 25% of total outstanding credit and half of new credit issued last year…Three major factors, in our view, have attributed to the surge in shadow banking. First, a lending quota-based macro management system has forced banks to move lending activities from on balance sheet to off balance sheet. Second, excessively low interest rates prompted the exit of deposits, so banks have to use alternative investment instruments to retain their revenue-generating base. Third, pressure for profits has made banks go after higher margin products, perhaps without proper assessment of their long-term risks.” 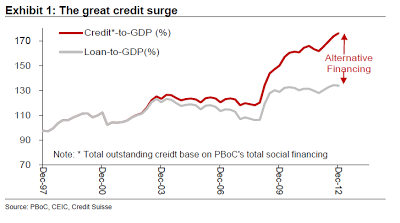 “China’s shadow banking sector has certain characteristics: (1) a complicated structure and poor transparency, with undisclosed or improperly disclosed risks, (2) many interrelated products, regardless of their point of origin, (3) excessive leverage on property and collateral value of land, (4) sensitivity to interest rate movements and property prices, (5) lack of regulation externally and risk management internally, and (6) critical dependence on a continued influx of capital and potential exposure to excess risk if liquidity becomes a problem.”
On the main segments of shadow banking

“The trust sector has surpassed insurance as the second largest financial sector now. In 2007 trust funds totalled CNY950 bn in size and now have reached CNY7,500 bn [USD 1,200 bn or almost 15% of China’s GDP] increasing almost eight times their size in five years….The trust sector blossomed when the central bank used loan quotas to manage the credit environment, prompting banks to remove developers and local government from their lending lists. Those that lost access to bank loans turned to trust funds for funding. Meanwhile, the central bank kept the deposit interest rate excessively low, causing deposits to be withdrawn from banks…Yet, regulations and surveillance have not been properly set up.””Banks are selling customers funding pool wealth management products [WMPs], usually with a verbal commitment on investment return, yet without disclosing what securities they will buy later. And funds raised through different WMPs are then pooled together. Typically, the money put into the funding pool will mature in 3-6 months, but the residual of the pool allows banks to buy corporate bonds and other securities with maturities of 3-10 years. The duration mismatch is obvious, the risk mismatch is obvious, underlying risks are not properly disclosed, and regulation is absent. The banks’ WMP products together are estimated to be about CNY 7.600 bn [another 15% of GDP], according to the CBRC.”“An acquaintance in Shenzhen was approached by a bank sales person selling a wealth management product (WMP) that offers 7.5% annualized guaranteed return. His requests to know what was behind the WMP’s 7.5% return turned up little information from both the sales person and the product team that designed this product. Eventually, he tracked down the person who designed this product. According to the designer, this 7.5% guaranteed return product was structured from eight trust funds and four corporate bonds. Among the eight trust funds, three are lending to the property markets, three are lending to local governments’ infrastructure projects, and in terms of the other two trust funds, even the designer did not know what the underlying investment was. It seems that high risk securities have been packaged into securitized products and are being sold as “low risk” financial instruments (sometimes with guaranteed returns). Buyers usually are not aware of the underlying risks. Bank sales people may be misinforming customers with an implicit guarantee.” 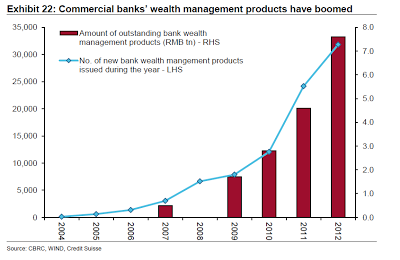 “Investment management run by brokers is another booming area. The current size of broker-related asset management is about CNY 2,000 bn [4% of GDP], but it is growing at a pace of CNY 10bn per day. Brokerage houses act as banks’ vehicles to securitize debt from local governments and property developers, putting these instruments onto their books as assets under their management.”

“The development of the corporate bond market per se could have been viewed as a positive development for China’s capital market. But the concern is with the infrastructure-related and local government financing vehicle (LGFV) bonds issued in the corporate bond market. Their outstanding amount increased by RMB 800bn in 2012…LGFVs’ financial ratios are often made to meet the requirements necessary to access the corporate bond market. We believe there is regulatory uncertainty regarding some of the methods LFGVs employ to boost their financial ratios in order to raise more funds, for example, by transferring large amounts of local government land to an LGFV to increase the asset base.” 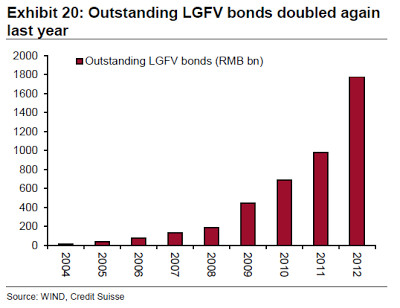 On the government response
“Will the government take pre-emptive steps to stem a potential crisis? We hope so, but think it unlikely. Before a crisis strikes, politicians would face a dilemma. If they are successful, then there would be no crisis (hence no reward); if they fail, then they would likely face criticism. We believe it might take a crisis for the top leaders to agree on a large sum bailout plan…The central government debt-to-GDP ratio stands at 15%. Adding local debt and other tangible liabilities, the ratio is 72%.”