Even in a huge market like U.S. fixed income, dealer balance sheet management these days can impair liquidity. New Federal Reserve research suggests that during the 2013 treasury sell-off dealers reduced their own positions rather than absorbing client flows and decided to limit their market making.

“Long-term interest rates hit record-low levels in 2012 but have since increased substantially…The sharpest increase occurred between May 2 and July 5 [2013], with the ten-year Treasury yield rising from 1.63 percent to 2.74 percent. During the May-July episode, market liquidity also deteriorated.”

“Market commentary suggests that a reduction in dealer balance sheet capacity may have contributed to the decline in market liquidity and amplified price declines during the selloff…. we look at dealers’ net positions (the difference between long and short positions), as reported to the Federal Reserve by the primary dealers…. Dealers markedly reduced their net positions in these fixed-income securities during the selloff, particularly for agency debt (red line) and agency MBS (green line), suggesting that they may have decided to limit their outright exposures rather than absorb inventory from customers looking to sell.” 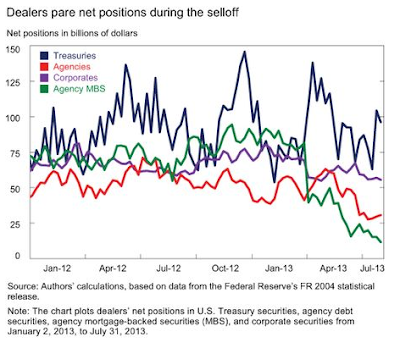 “To gauge dealer market-making more broadly, we also look at dealers’ gross positions in fixed-income securities. The chart below plots ten-week percentage changes in primary dealers’ long positions of U.S. Treasuries, agency debt, and agency MBS against ten-week changes in dealers’ short positions of these same securities. The biggest decline in long positions in 2013 occurred between May 8 and July 17 (the red diamond to the extreme left of the lower-left quadrant), suggesting that dealers reduced their market-making activities during the selloff.” 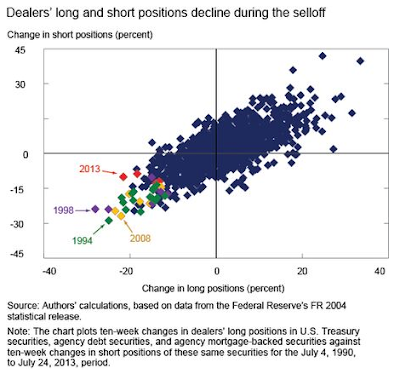 “Dealer leverage, gauged either by gross or net leverage, declined markedly during the recent financial crisis and has been stable since (gross leverage is calculated as total assets over equity capital, whereas net leverage is calculated as total financial assets − which nets dealers’ reverse repos − over equity capital). This notable decline in leverage suggests that dealer risk-taking has moderated since the crisis.” 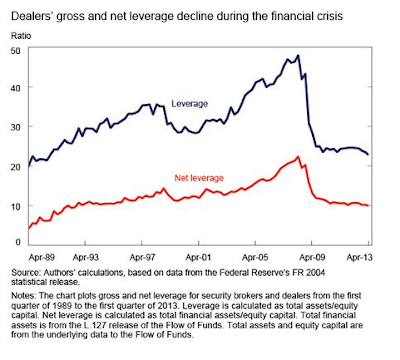 “Another indicator of risk-taking is value at risk (VaR). VaR is a measure of the worst expected loss over a given time horizon at a given confidence level. The next chart shows that the sum of firm-wide VaR across eight large U.S. dealers has trended downward since the financial crisis…. The chart also shows that VaR tends to move in tandem with market volatility (as proxied by the MOVE, or Merrill Option Volatility Estimate index)…Interestingly, dealer VaR didn’t increase during the 2013 fixed-income selloff, even though volatility rose sharply, suggesting that dealers might have actively managed their risk exposures to insulate their firm-wide VaRs from price moves. ” 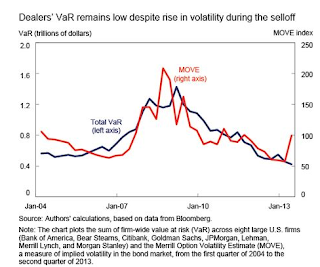 “In fact, an analysis of the cross-sectional behavior of dealers highlights the observation that firms that appear to have reduced their net fixed-income positions more tended to experience a larger decline in their interest rate VaR, as shown in the table below. Furthermore, dealers that reduced their positions more during the selloff experienced larger increases in their tier 1 capital and tier 1 leverage ratios in the second quarter. That is, a reduction in net positions by some dealers indeed appears to have been associated with a reduction in risk-taking. “