The ECB’s new “due diligence” paper on China reiterates why severe imbalances are inherent in the country’s high-growth model. Without a fundamental overhaul the key imbalances, such as overinvestment, large state control, and financial repression are likely to persist. For now, supply side conditions suggest that this model may still deliver sufficient (8% or higher) GDP growth. Yet as trend growth will inevitably slow, severe tail risks such as “widespread corporate defaults, systemic banking sector stress and social unrest” are looming.

The ECB paper essentially is backing three key theses on the nature of China’s economic strategy:

1. The still prevailing producer-biased model of managed capitalism in China tends to engender serious imbalances which cannot be unwound without a fundamental overhaul.

“China, like many other countries in the early stages of development, has had an incentive to provide substantial government support to state-owned enterprises (SOEs) so that they could generate increasing profits to build not only physical capital, but also organisational structure. This has taken the form…of: (i) “commanded” loans from the banking industry to SOEs and local governments, with policy-makers instructing banks whom to lend to; (ii) high reliance of SOEs on retained earnings; and (iii) the setting of very low deposit rates in order to artificially reduce the cost of credit and ensure the profitability of the banking sector.” 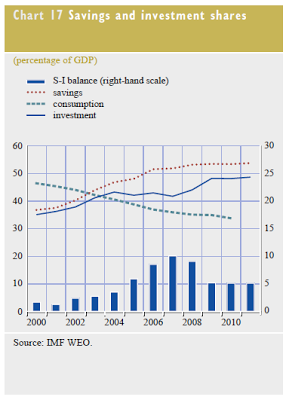 According to the ECB paper “[resulting] imbalances include a share of investment over GDP which is too high, a private sector which is still too small, a relatively weak services sector, financial repression, rising income inequality and inefficiencies in the use of production factors.” 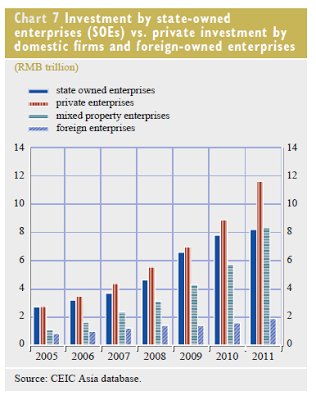 “In fact, the Chinese economy looks more “commanded” now than before the global crisis that started in 2007/08, with less room for manoeuvre for private sector activities. As a response to the global financial crisis, investment has been allocated on the basis of central and local government guidelines, and mainly financed through SOEs’ loans. ”

“Financial repression (Lardy 2008) materialises as forced lending by banks to SOEs and local governments. A more thorough examination, however, reveals that bank depositors have been de facto subsidising the banking industry and the government, which has resulted in a major redistribution of income from households to the other two sectors via artificially low deposit rates. This is a key cause of the insufficient level of consumption in China, because income is confiscated from households and directed into capital spending.”

2. The fundamental factors underpinning growth in China are likely to remain supportive, at least over the medium run. Although this could help mitigate the economic costs of imbalances for some time to come, it could also reduce the incentives for policy-makers to enact much needed reforms.

“In 2010, China’s GDP per capita in PPP terms was 16% of the US and 22% of the Japanese and euro area GDP per capita…On the supply side, capital stock per capita remains low, industrial profit margins remain high and rural labour supply is still abundant; at the same time, inward foreign direct investment into the mainland areas, efforts to lower the costs of migration and the share of highly sophisticated exports thanks to imported technology via multinational companies are all increasing.” 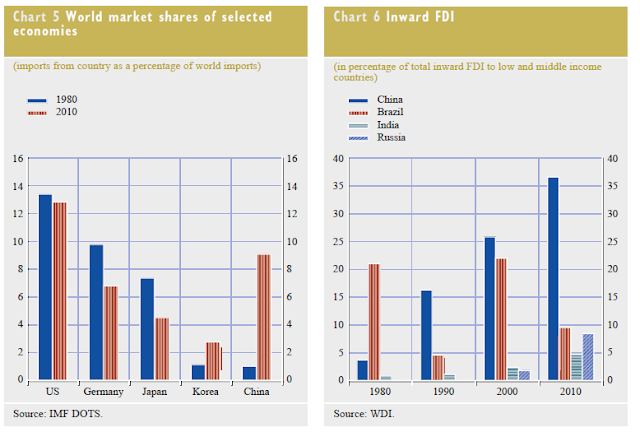 “Historical evidence on other Asian economies would suggest that China still has a sufficient pool of rural labour supply to support labour productivity growth in the coming years. [As the chart below shows], China’s agricultural labour share is relatively high compared to other emerging economies, i.e. slightly below 40%. This level is not unprecedented: both Japan and Korea’s share was also around 40% in the early stages of their development, but has now declined to below 10%. Therefore, there is still, most probably, room for further labour restructuring and productivity gains.” 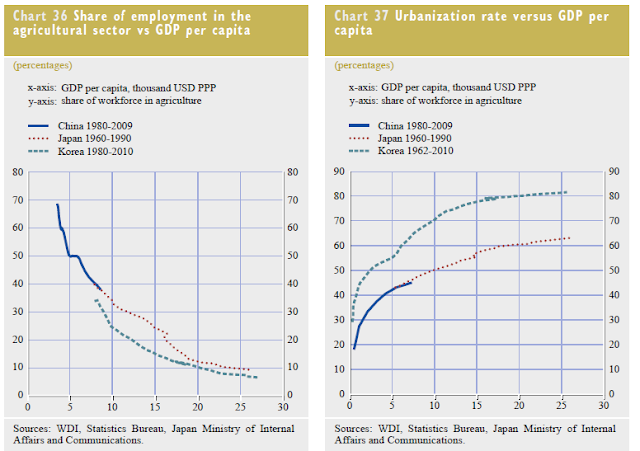 “[Ultimately] a decline in the marginal productivity of capital limits investment, the depletion of cheap rural labour increases wages, and the ensuing higher level of consumption – often coupled with population ageing – lowers the savings rate. …In a lower-growth environment the corporate sector will have to operate with reduced profit margins owing to the increased cost of capital and labour. Financial institutions will have to ensure a much more efficient allocation of capital than is the case under the current “financial repression” model, in an environment where price and information distortions may bring about significant losses and financial stability risks.”

A major concern is that most of the loan growth in China has been associated with very loose credit standards, i.e. loan pricing that has not been properly assessed and implicit guarantees that are not enforceable. In addition, local governments – the entity ultimately responsible for such projects – have not improved their finances in the last few years. 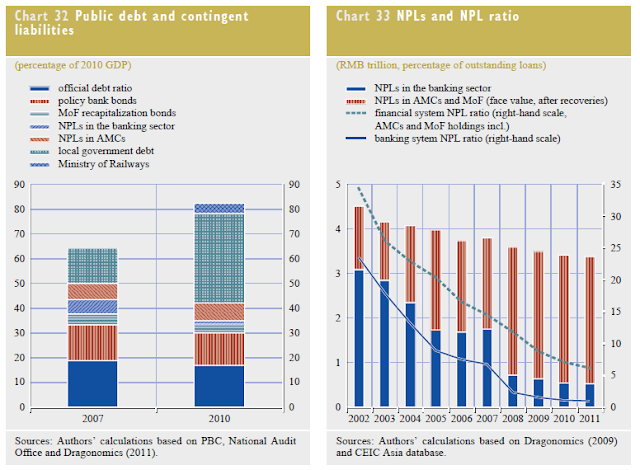 “From a financial stability perspective, a major concern is that the surge in domestic loans to finance investment in infrastructure as part of the…stimulus package of 2008-10 could result in a surge in non-performing loans (NPLs) and, therefore, the contingent liabilities of the official sector…The bulk of such investment stemmed from local government and was financed mainly through land-collateralised bank loans extended to around 10,000 local government financing vehicles that had been created to circumvent the balanced budget constraint of local governments. Such vehicles did not have official backing from local government, but rather an implicit guarantee. “

What markets can learn from statistical learning