A Bank of Italy paper illustrates and explains the rise in European banks’ sovereign debt holding since the great financial crisis. It also reiterates structural causes for bank-sovereign feedback loops. One would conclude that this nexus remains an important factor for market dynamics and monetary policy.

“Banks in virtually all European countries had been reducing their exposures to their domestic sovereign (indeed, to all euro-area sovereigns) for several years, but in the Fall of 2008, after the Lehman default, they resumed purchases.” 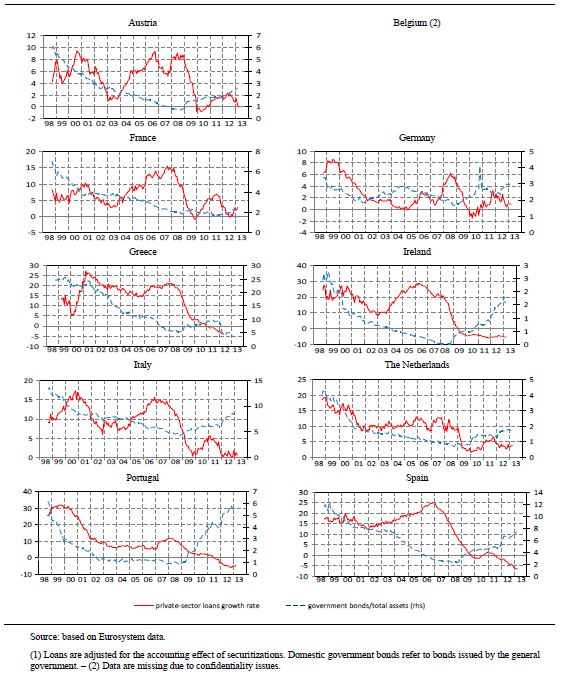 “What were the mechanisms whereby the crisis triggered a resurgence of the home bias from the end of 2008 on? … Evidence suggests…that the recent expansion of banks’ government securities portfolios is a consequence, not a cause, of the crisis…

How sovereign risk is transmitted to banks

“Deterioration… in a government’s creditworthiness…may cause…losses…on banks’ portfolios of sovereign securities and…their loans to the government…Sovereign exposures… are often substantial… [while] direct exposure to foreign sovereign debt is ordinarily limited…Current regulations…give claims on the government preferential treatment over those on private borrowers…partly reflecting the Basel II framework, de facto zero risk weights are granted to most of the debt issued by EU sovereigns.”

“Sovereign strains [affect] bank funding… also in terms of liquidity…. Since government bonds are typically used as collateral, e.g. in repos, a fall in their price can trigger margin calls or larger haircuts, thus reducing the liquidity that can be obtained via a given nominal amount of sovereign paper. Related to this, in most countries government paper is typically given preferential treatment as collateral in central bank operations. It is also assigned an important role in the Basel III liquidity framework via the so-called liquidity coverage ratio. ”

“Several governments introduced explicit guarantee schemes on bank bonds after the collapse of Lehman Brothers in October 2008. There is evidence that these guarantees helped reduce risk premia on banks’ liabilities, and that their effect was proportional to the creditworthiness of the sovereign…Implicit guarantees are harder to measure, but there is evidence that they may be among the reasons why on average large banks borrow at a discount.”

“Sovereign downgrades often lead to downgrades of domestic banks, not least because the sovereign rating normally represents a ceiling for the ratings assigned to private borrowers. Downgrades reduce the value of banks’ liabilities; loss of investment grade status can make them ineligible as collateral in funding operations, or as investments suitable for certain categories of investors, such as pension funds and insurance companies.”

How bank risk is transmitted to sovereigns

“A financial crisis may require the government to support banks and other financial institutions… In late 2008-early 2009 the magnitude of this support was unprecedented…In some cases (Ireland, Iceland, and more recently Cyprus) the size of the banking problem was as large as to jeopardize the sovereign.”

“A credit squeeze will weaken the economy, leading to a decline in borrowers’ creditworthiness and to further tensions in the sovereign’s situation, due to falling fiscal revenues and the need for further fiscal tightening.”

Empirical findings on the bank-sovereign nexus

“From the analysis of credit risk premia (gauged by CDS contracts and banks’ exposure to the domestic sovereign), three facts stand out.”

“In a nutshell, our evidence suggests that in practice the bank-sovereign nexus may not be as ‘special’ as one might have expected a priori, pointing instead to the special status of sovereign risk for the whole domestic economy: when the sovereign runs into trouble, so does the entire economy; country risk seems to be a key factor underlying the sovereign-bank relationship.”