The latest IMF fiscal monitor underscores progress in global fiscal consolidation. The structural government deficit in the developed world has been reduced by 1.2%-points to below 4% of GDP in 2013, while the public debt stock inched lower to 107% of GDP. Fiscal tightening is now becoming less aggressive in most countries, with the notable exception of Japan. Fiscal risks remain globally elevated though, due to low inflation, historically debt levels (view link here), and sizable unfunded pension liabilities.

The below are mostly excerpts from the report. Cursive text, including all paragraphs of the first section, have been added to summarize content. Also emphasis on the report’s quotes has been added.

Some basic numbers to memorize

Most of the recent improvement in the advanced countries’ balance has come from discretionary tightening, as the cyclically-adjusted deficit narrowed to 3.8% of GDP in 2013, from 5% in 2012.

The emerging economies’ general government deficit, by contrast has widened to 2.4% in 2013, from 2.1% in 2012, but remained modest in comparison with the developed world and well below the emerging countries’ 4.6% peak in 2009. The IMF expects the EM countries’ deficit to broadly stabilize this year. 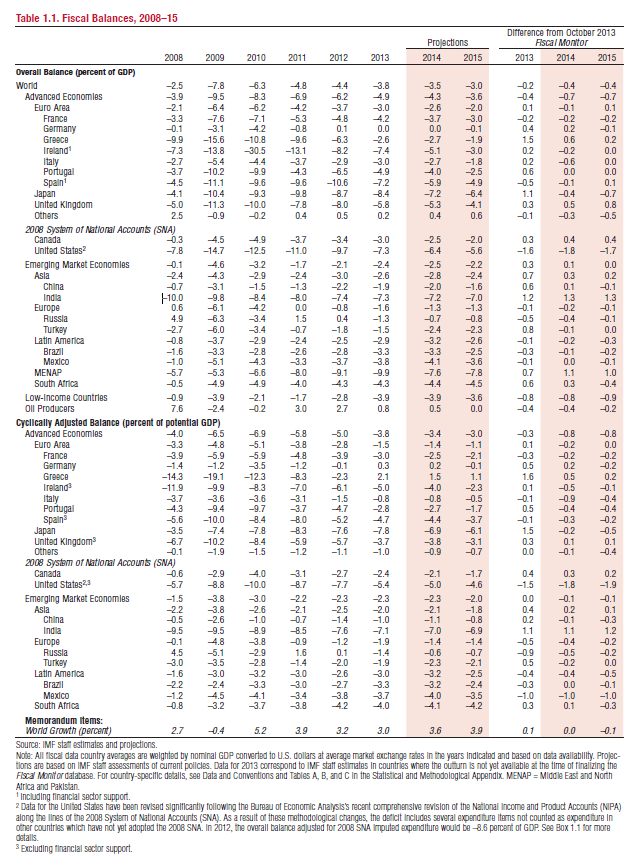 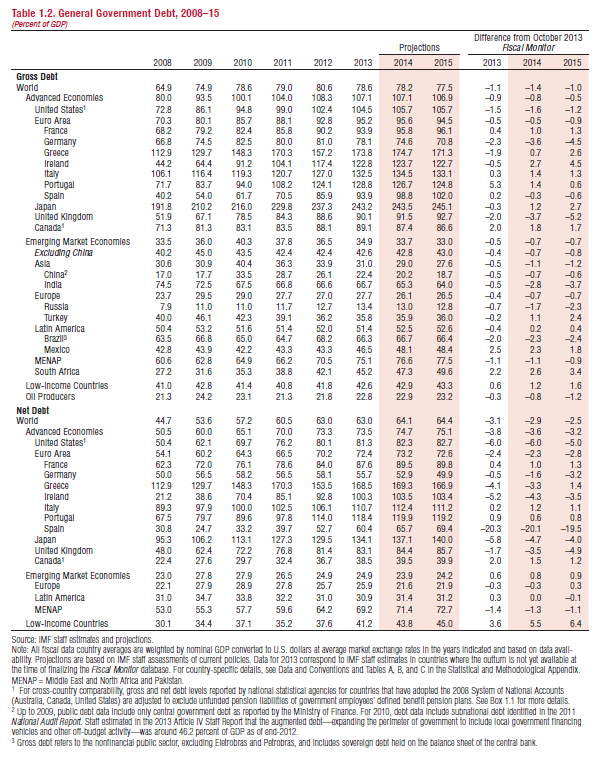 “In 2014, the average pace of fiscal consolidation, as measured by the change in the cyclically adjusted balance, is projected to ease to 0.4 percent of GDP, from 1¼ percent of GDP in 2013.” 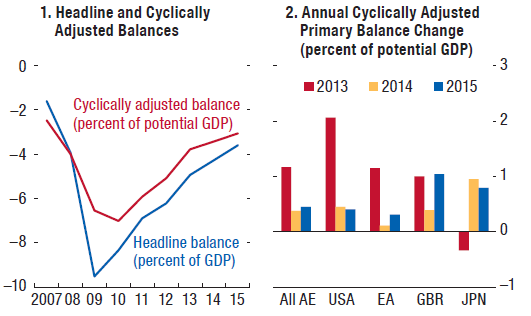 “In the United States, fiscal tightening in 2014 is projected to be one-fifth of that in 2013, largely reflecting the waning impact of higher tax revenues and, to a smaller extent, the rolling back of the automatic spending cuts (sequester), including through the partial relief provided by the December 2013 bipartisan budget deal. In much of the euro area, the pace of adjustment is also projected to moderate in 2014, as most of the adjustment required to reach medium-term targets has been achieved and the focus is shifting to supporting the recovery, in line with EU-agreed medium-term objectives.”

“In some countries, the fiscal stance is projected to tighten in 2014. Japan is expected to step up its fiscal consolidation efforts this year with the first stage of the consumption tax rate increase and the withdrawal of some of the previous stimulus and earthquake-related reconstruction spending measures. However, these will be partly offset by a new fiscal stimulus package…which includes transfers to low-income households, increases in public investment, and a reduction in the corporate income tax rate…Japan’s cyclically adjusted overall balance is projected to improve by 1 percent of GDP in 2014.”

“Although budget plans for 2015 have not yet been adopted, fiscal consolidation is envisaged to continue next year…The composition of fiscal consolidation to date has been roughly equally shared between revenue-raising and expenditure-reduction measures. The adjustment is expected to shift more toward expenditure-reduction measures in 2014–15, as spending cuts take the forefront (especially in the euro area).”

In July 2013, the United States implemented… the 2008 System of National Accounts (SNA). One of the major conceptual changes concerns the accounting treatment of defined-benefit pension funds (DBPFs), including those funds that cover government employees…The accounting change does not affect the general pay-as-you- go Social Security system.

“The financial accounts now show ‘pension entitlements’ as an asset of the household sector and as a liability of the pension fund sector. The difference between pension entitlements and pension fund assets (underfunding or overfunding) is now shown as ‘claims of pension fund on sponsor,’ which is an asset of the pension funds and a liability of the sponsors of the funds (e.g., state and local governments, the federal government, and corporations, as applicable). In particular, government liabilities are now increased by the extent of underfunding of DBPFs of government employees.”

“The government accounts also now record additional expenditures. In addition to actual contributions paid to DBPFs by the government as employer, imputed contributions corresponding to the present value of newly accrued employee entitlements (less any contributions actually paid) are included in ‘labor costs.’ Finally, interest expenditure is augmented by the imputed interest on the recorded government liabilities to DBPFs.”

“Few countries have adopted the 2008 SNA to date. Australia, Canada, and the United States implemented the most important changes (employers’ pension schemes, and capitalization of research and development and some military expenditure) between 2009 and 2013. European Union countries aim for 2014 and Japan for 2015. In the countries that have adopted the new standard, the unfunded pension liabilities of the general government are substantial, at more than 20 percent of GDP. In addition, the two newly reported expenditure items (mainly the imputed interest) widened the reported overall deficit of the United States by an annual average of 1.2 percent of GDP during 2009–12.”

Tracking the history of sovereign defaults