Warwick professor Nicolas Crafts notes that the UK’s exit from recession and deflation in 1930s has similarities to Japan’s current expansionary policy. At the time the UK managed recovery and reflation through very low rates and initial currency devaluation. Crafts argues that such strategies may require abandoning inflation-targeting independent central banks.

http://www.voxeu.org/article/escaping-liquidity-traps-lessons-uk-s-1930s-escape
“In mid-1932, the UK had experienced a recession of a similar magnitude to that of 2008-09, was engaged in fiscal consolidation that reduced the structural budget deficit by about 4% of GDP, had short-term interest rates that were close to zero, and was in a double-dip recession. The years from 1933 through 1936 saw a very strong recovery with growth of over 4% in every year.”
“The policy framework adopted from mid-1932 has a strong resemblance to the so-called ‘foolproof way’ of escaping from the liquidity trap (Svensson, 2003) and to ‘Abenomics’. After the forced exit from the gold standard in September 1931, by the middle of 1932 the Treasury had devised the so-called ‘cheap-money policy’. 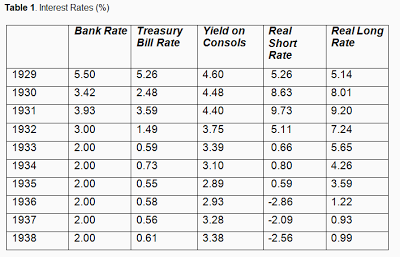 “The classic problem with the ‘foolproof way’, especially for central banks, is whether they can credibly commit to maintaining inflation once recovery appears to be under way. Because of its problems with fiscal sustainability, the Treasury was in a good position to persuade markets that it wanted sustained moderate inflation as part of a strategy to reduce the real interest rate below the growth rate of real GDP and to benefit from this differential in reducing the public-debt-to-GDP ratio. This reliance, based on ‘financial repression’, allowed more tolerance for lower primary budget surpluses and eased worries about ‘self-defeating austerity’ without a Keynesian approach to the public finances.”
“Most obvious is that when at the zero-lower-bound, conventional inflation-targeting by an independent central bank may not be the appropriate framework for monetary policy…The issue goes beyond the current discourse [in the UK], which is focused on whether the target should be revised either to a higher rate of inflation or something based on nominal GDP. Britain in the 1930s benefited from not having an independent central bank. The lesson seems to be that central-bank independence is not always, and may not be today, the best way to implement monetary policy.”