Regulators and financial institutions rely on statistical models to assess market risk. Alas, a new Federal Reserve paper shows that risk models are prone to creating confusion when they are needed most: in financial crises. Acceptable performance and convergence of risk models in normal times can lull the financial system into a false sense of reliability that transforms into model divergence and disarray when troubles arise.

What are statistical risk models?”

[Statistical risk models are] models used for forecasting systemic and market risk…statistical risk measures are set to play a much more fundamental role in policymaking and decision making within financial institutions.

“While intended for different purposes, both the market data based systemic risk methods and the market risk regulation techniques are closely related, sharing a methodological common root, [namely] VaR.”

What is model risk?

“Broadly speaking, model risk relates to the uncertainty created by not knowing the data generating process… Within the finance literature…authors have defined model risk as… inaccuracy in risk forecasting that arises from estimation error and the use of an incorrect model.”

“It has been known, from the very first days of financial risk forecasting, that different models can produce vastly different outcomes, where it can be difficult or impossible to identify the best model… The fundamental problem of model risk in any risk model such as VaR arises because risk cannot be measured, but has to be estimated by the means of a statistical model. Many different candidate statistical models have been proposed where one cannot robustly discriminate between them.”

“In spite of this, very little formal model risk analysis [on the divergent outcome of different underlying conventional methodologies] has been done on VaR…In order to assess the model risk…we propose a new method we term risk ratios. This entails applying a range of common risk forecast methodologies to a particular asset on a given day, and then calculating the ratio of the maximum to the minimum risk forecasts.”

“While there is a large number of candidate methods for forecasting risk, the following six techniques in our experience are by far the most common in practical use: historical simulation, moving average, exponentially weighted moving average, normal GARCH [models that assume variance to be a linear function of previous time periods’ fluctuations], student-t GARCH [assuming greater outlier risk than classic normal distribution models], and extreme value theory. For that reason, we focus our attention on those six.”

How serious is model risk?

“The data set [of the empirical analysis] consists of large financial institutions traded on the NYSE, AMEX, and NASDAQ exchanges from the banking, insurance, real estate, and trading sectors over a sample period spanning January 1970 to December 2012… We calculate the highest to the lowest VaR estimates for the random portfolios employing the six VaR approaches ”

“The mean model risk across all stocks and observations is 2.26 [maximum risk forecast relative to minimum risk forecast]… In the most extreme case it is 71.4…By further segmenting the sample into calm and turmoil periods, we find that model risk is much higher when market risk is high, especially during financial crises…model risk is positively and significantly correlated with market volatility, where the VIX…causes model risk…In other words, market volatility provides statistically significant information about future values of the risk readings’ disagreement.” 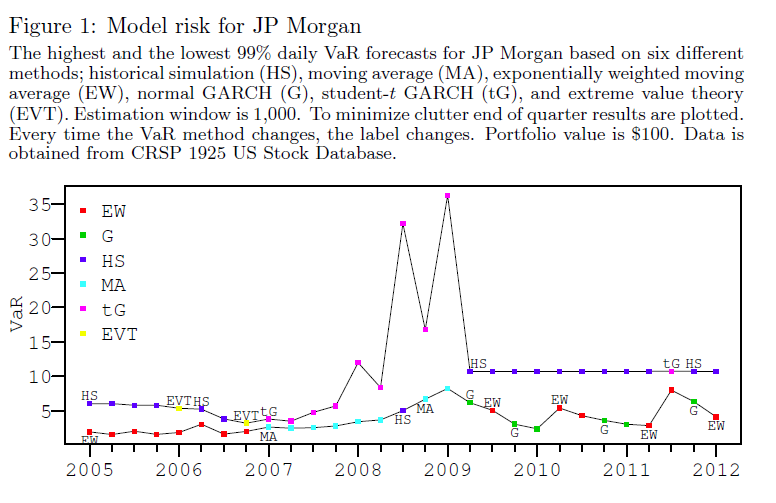 “When we apply the risk ratio analysis to the overlapping 97.5% expected shortfall approach proposed by the Basel Committee, instead of the current regulations with non-overlapping 99% VaR, we find that model risk increases by a factor of three, on average, with the bulk of the deteriorating performance of the risk models due to the use of overlapping estimation windows [N.B. overlapping windows means that the same observations enter different samples and hence outlier events have repeated impact and can greatly bias statistical inference].”

What are the causes of model risk?

“We suspect the problem of poor risk model performance arises for two reasons.

What are the consequences of model risk?

“The empirical results are a cause for concern, considering that the output of the risk forecast models is used as an input into expensive decisions, be they portfolio allocations or the amount of capital… The absence of model risk during calm times might provide a false of confidence in the risk forecasts. From a macro prudential point of view, this is worrying, since the models are most needed during crisis, but that this when they perform the worst.”