Marco Dion, Viquar Shaikh and colleagues at J.P. Morgan Cazenove illustrate how the information value of equity dividend yield can be enhanced. Their measure of “shareholder yield” integrates dividends with other forms of cash returns, i.e. share buybacks and debt redemption. They present evidence that for U.S. and European stocks the enhanced measures creates alpha for systematic trading styles.

“When studying dividend and dividend based strategies, we find that not all companies should be considered equal as not all companies pay dividends and not all managements consider dividend as an essential method of rewarding investors…many large companies spend a substantial amount of money in share buy-backs and/or debt repayment.”

“Dividend Yields and companies’ usage of their excess cash have seen a greater scrutiny since the sub-prime crisis…Dividend Yield appears attractive to risk-averse investors as it enjoys better performance during volatile and unstable periods.” 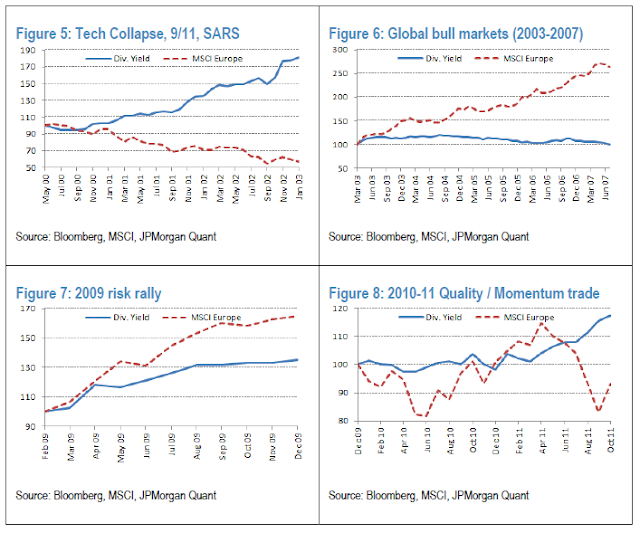 “Academics and practitioners alike have over the years questioned the wisdom of using only dividends as a means of returning cash to the shareholders when there could be other (and arguably better) ways of increasing the shareholder value.” 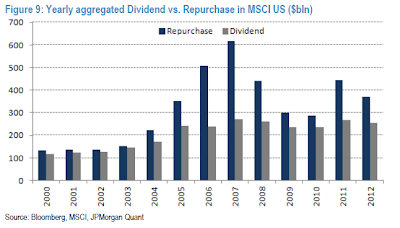 “Another potential improvement to our Dividend Yield Factor is to incorporate the level of Debt Repayment undertaken by the company. The level of debt (long term & short term) and the increase/decrease in its number is indeed generally information that Dividend Factors alone ignore but can, however, represent a significant percentage of the use of cash by some companies… In building the ‘Net Changes to Debt’ metric, we penalize stocks which show an increase in their long term/short term debts while preferring those stocks that have reduced their debt exposures over previous year.”

“We…create a single Factor (“Shareholder Yield”) that combines all these three components.”

“Implementing these rather simplistic changes to building the Shareholder Yield Factor produces a stronger Alpha signal while also controlling for risk (this is translated into better Sharpe ratio, lower drawdowns and higher success rate). Those results were consistent over time and were robust regardless of the rebalancing, holding period, universe and decile/quintile methodology used…The new ‘Shareholder Yield’ Factor has a very low cross-sectional correlation with the other popular Factors and styles.”

N.B.: “The biggest task we faced when producing this analysis was sourcing the data. While cash-flow statements data, if sourced from certain third party providers, can potentially go back until the 1970s, that coverage is mostly restricted to names from the US… financial statement data on Bloomberg (or Reuters Global Fundamental database etc), goes back until only the late 80s/early 90s for some names, though the coverage only starts getting meaningful towards the late 90s/early 2000s.”