A new paper estimates that U.S. economic data explain more than a third of bond price fluctuations on a quarterly basis. The economic data impact on daily fluctuations is much weaker. It grows with the time horizon because economic factors are more persistent than non-fundamental factors. The simple powerful message is that economic news flow is crucial (and probably underestimated) for identifying market trends.

The design of the research

“We use…the Economic Calendars (ECO) provided by Bloomberg. For each macroeconomic release, this dataset contains the realized value and the predictions made by a panel of market participants for the same value…The survey value used in the empirical analysis is the median (consensus) forecast. Using both the official releases and the corresponding forecast for each macroeconomic variable allows us to reconstruct the size and direction of all news that hit the market at each point in time… [The news are matched with a] relevance index. The value of this index corresponds to the percentage of Bloomberg users who set an alert for a particular event.” 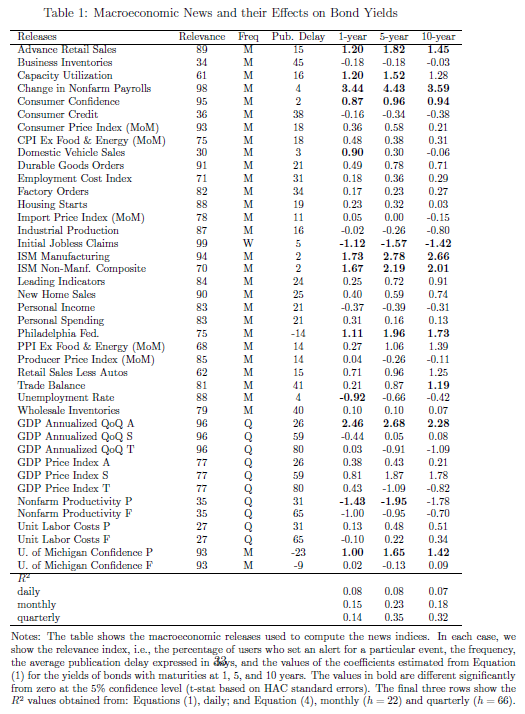 The daily impact of economic news

“Focusing on high frequency changes can facilitate the correct identification of the causal effects of macroeconomic news by reducing the effects of confounding factors… we regress the daily change in a bond yield…on day t on a constant and on the news released on day t… In agreement with previous studies, we find that several types of macroeconomic news are economically important and they have statistically significant impacts on daily changes in bond yields. However, their explanatory power is quite limited, i.e., the R2 value of the regression [the ratio of fluctuation explained on a daily basis] is about 10% only.”

The monthly and quarterly impact of economic news

“By summing the fit of the daily regressions over a month (quarter), we obtain the fit for the monthly (quarterly) changes in bond yields. The fundamental component becomes more important when focusing on these low-frequency changes; indeed, moving from daily to quarterly increases the [ratio of fluctuations explained by macroeconomics news] …to over 30%. This is because macroeconomic news has a persistent effect on bond yields, whereas the effect of non-fundamental factors is less persistent and it tends to average out when focusing on longer horizon changes. In other words, the importance of macroeconomic factors is hidden by the high frequency noise that dominates the daily fluctuations in bond yields.”

“The types of macroeconomic news considered in this study are only a subsample of the innovations in macroeconomic fundamentals that may affect U.S. Treasury yields. We do not consider surprises related to policy announcements regarding monetary and fiscal policy interventions. Moreover, we only consider U.S. variables, but international factors could also have played important roles.”

“Interestingly, the interaction between macroeconomic news and yields did not break apart after the zero lower bound became binding at the end of 2008…we show that macroeconomic news continued to exert an important influence at a low frequency on changes in bond yields. This evidence corroborates the view that the non-standard monetary policies adopted by the U.S. Federal Reserve, i.e., a combination of forward guidance and large-scale asset purchases, have been successful in keeping the bond yields anchored to macroeconomic news.”