A new IMF paper investigates the role of shadow banks in securitization and collateral intermediation. One important forward-looking concern is the potential vulnerability of collateral chains, i.e. the use of a single security for multiple secured loan transactions.

The IMF paper focuses on two functions of the shadow banking system that are most close economically to those of traditional banks: collateral intermediation and securitization. Activities occur outside traditional banks, albeit with their support.

“In its collateral intermediation function, shadow banking serves the demand of agents for safety by reducing counterparty risk. Collateral underpins a wide range of financial transactions: secured funding (mostly by nonbank investors), securities lending, and hedging (including with over-the-counter (OTC) derivatives). As collateral is scarce, a key shadow banking function is to re-use collateral to support a large volume of transactions.

“Unlike securitization that focuses on safe assets, collateral intermediation involves assets varying from U.S. Treasuries or German Bunds to CCC rated bonds or equities. As long as it has a market-clearing price, even low-rated collateral can be used.”

“A small number of dealer banks, all SIFIs, are uniquely placed in their ability to facilitate collateral-based operations. It is hard to quantify these dealer banks’ comparative advantage, but they probably include having incurred the fixed costs of entry, and benefitting from economies of scale and network centrality effects (compared to other traditional banks).”

“The best way to describe the re-use of collateral is to visualize it in chains. Dealer banks source collateral. They receive it from parties that require funding, or from agents that want to enhance their return by “renting out” their assets as collateral (Singh and Aitken, 2010). Then, collateral is pledged to other parties to obtain funding or support other contracts. This starts a system of repeated re-use of collateral where a single unit can support multiple transactions. The stock of collateral and its velocity (the intensity with which it is used) both matter.”

“The collateral intermediation function is likely to become more important over time. In the short term, increased counterparty risks (as during 2007–08 and in Europe today) make secured funding more attractive. In the longer term, with more arm’s-length transactions in an increasingly globally integrated financial system, market participants are seeking the security of collateral to underpin a wider range of claims. New regulations, such as increased requirements for collateral in derivatives, including in central clearing, are also likely to increase the demand for collateral-based operations.”

“The securitization function, operating through the prime money funds complex, serves the needs of large institutional cash pools that seek safe, short-term investments and—more controversially—the demand of banks for assets that can be used to secure repo funding. 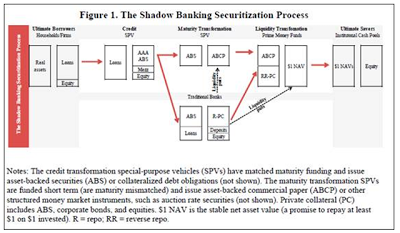 While securitization has declined since the crisis in response to realized risks and tighter regulation, many of these market failures remain and risks could re-emerge. 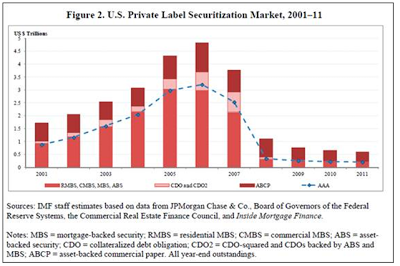 “The distortions and systemic risks in shadow banking include (i) regulatory arbitrage by banks in securitization, (ii) the risks of runs on private “safe” assets, and (iii) fragilities in collateral intermediation. In a crisis, these risks may end up being “put” to the public safety net, as many shadow-banking-related entities—banks, dealer banks, and (under some conditions) money market funds—benefit from implicit or explicit guarantees. These “puts” make the system effectively subsidized, which amplifies risk-taking.”

“Even abstracting from regulatory arbitrage, bank holdings of securitized debt can be problematic. First, investments by banks in tradable debt can contribute to pro-cyclicality, as it makes it easier for banks to load up on debt during periods of market exuberance and can lead to fire sales of assets by banks during downturns. Second, holdings of securitized debt by banks represent a lack of risk transfer from banks to the rest of the financial system, negating a potential benefit of securitization (Shin, 2009).2