A working paper explores sources of market price trends. It suggests that small trend changes in perceptions about “fundamentals” can set in motion a persistent adjustment in transacted prices. And even without any changes to “fundamentals” or “technicals” trends are plausible.

The below are excerpts from the paper (which is somewhat technical and may require more editing). Cursive text and emphasis have been added.

The basics of the analysis

“There are two major approaches [to investigate fluctuations in market price changes]. One is to investigate features or natures of the data from the viewpoint of statistics and dynamical systems… this approach is restrictive, because it does not always lead us to the understanding of…the interaction between dealers’ choices and market price properties… the other [approach] is to construct an artificial market using a model and investigate events in the market… we follow the latter approach.”

“We use a previously proposed deterministic dealer model with threshold elements… proposed in 1992 by Takayasu et al… As the model treats price of all deals, the price data generated by the model should be compared to tick data…A deal, composed of consecutive selling and buying, is a typical discontinuous and irreversible process. A deal is done, if a buying condition and a selling condition meet, while it is undone, if not. This is the origin of the discontinuity. The buyer and the seller of the last deal would never deal again under the identical condition at least for a while. This is the origin of the irreversibility.”

“A unique aspect of this model is that it takes into account an acquisitive nature of the buyer and sellers for the next deal. It is assumed that the buyers and sellers who could participate a deal expect that they can participate again in the next deal with a cheaper price for the buyer and a higher price for the sellers [else they would have bought or sold more in the first place].”

The basics of market price changes 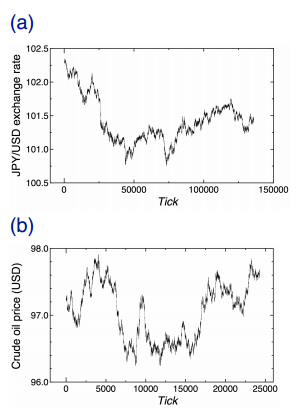 Proposition 1: Small changes in expectations can cause persistent trends

“When a monotonic increase trend is expected in a market, which corresponds to self-fulfilling expectation, it seems to be plausible that a dealer, whether the dealer is either a buyer or a seller, considers that the [other] dealer is not likely to take the same attitude in the next deal…Even if the amount of a change in the psychological tendency of a dealer caused by fundamentals is very small, it can bring a major influence on the market forces.”

Proposition 2: There can be price trends without trends in fundamentals and technicals

“The emergence of trends is all but inevitable in the realistic situation because of the fact that dealers cannot always obtain accurate information about deals, even if there is no influence from fundamentals and technical analyses.”

“We consider possible (or unknown) underlying origins of the trends without the influence of fundamentals and technical analyses on financial markets.”

“All dealers in the actual financial markets cannot know the number of sellers in the deal in advance, when a deal is done… However, it is possible to know it in the past deals. [A practical example is that market participants observing a multitude of investment funds selling securities to a small number or broker dealers].”

“It does not seem to be easy to predict the next number of sellers using the past data… When the prediction does not seem to be easy, one of the common approaches is to use the mean value of the data: the average number of sellers who participated deals in the past… the simulated price data [based on such predictions]..have short-term variabilities and exhibit the appearance of medium and long-term rising and falling behaviours of trends.”