The New York Fed’s Economic Policy Review provides a basic overview of past and current shadow banking activities in the U.S. and beyond. Securitization and non-bank wholesale funding remain at the heart of the system. The relevance of shadow banking is likely to recover, as capital and liquidity standards in the regulated banking system are tightening.

The below are excerpts from the paper and the post. Cursive text and emphasis have been added.

What is shadow banking?

“Shadow banking activities consist of credit, maturity, and liquidity transformation that take place without direct and explicit access to public sources of liquidity or credit backstops.” 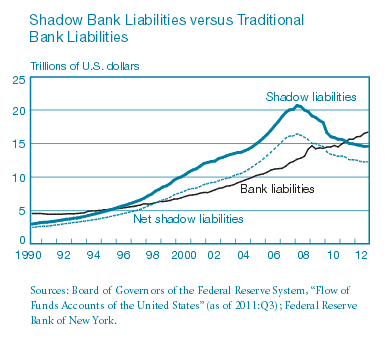 How does shadow banking work? 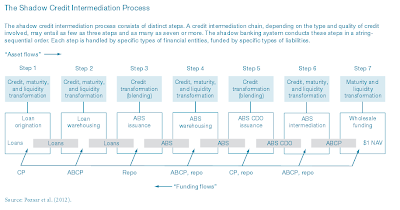 Who is involved in shadow banking?

“We identify three subgroups of the shadow banking system:

“Increased capital and liquidity standards for depository institutions and insurance companies are likely to increase the returns to shadow banking activity. For example, as pointed out in Pozsar (2011), the reform effort has done little to address the tendency of large institutional cash pools to form outside the banking system. Thus, we expect shadow banking to be a significant part of the financial system, although almost certainly in a different form, for the foreseeable future. ”

“In contrast to traditional banking’s public sector guarantees, the shadow banking system…[used] contingent lines of credit and tail-risk insurance in the form of wraps and guarantees. The credit lines and tail-risk insurance filled a backstop role for shadow banks…These forms of liquidity and credit insurance provided by the private sector, particularly commercial banks and insurance companies, allowed shadow banks to perform credit, liquidity, and maturity transformation by issuing highly rated and liquid short-term liabilities. However, these guarantees also acted to transfer systemic risk between the core financial institutions and the shadow banks…The failure of private sector guarantees to support the shadow banking system occurred mainly because the relevant parties—credit rating agencies, risk managers, investors, and regulators—underestimated the aggregate risk and asset price correlations. “