Sovereign wealth funds now hold assets worth roughly 4% of global GDP, and are governed by politically-mandated investment objectives. A new IMF paper gives an overview of size, types, investments and governance structures of these institutions.

The size of Sovereign Wealth Funds

“Sovereign wealth funds (SWFs) are special purpose investment funds or arrangements that are owned by the general government. Created…for macroeconomic purposes, SWFs hold, manage, or administer assets to achieve financial objectives, and employ a set of investment strategies that include investing in foreign financial assets.”

“Total assets under management by Sovereign Wealth Funds (SWFs) have been growing rapidly over the last few years…Upper-end estimates indicate total SWF assets of around USD5 trillion. This figure, however, may double count some sovereign assets, by including central bank assets that are already captured in official reserves. Based on the definition of the International Working Group of Sovereign Wealth Funds, which excludes central banks and state-owned enterprises, the total assets of SWFs—with publically available data for thirty SWFs—are about USD3 trillion [4% of global GDP].”

The types of Sovereign Wealth Funds

“Though there are many SWFs with multiple objectives, based on IMF and the Santiago Principles taxonomy, five types of SWFs can be distinguished 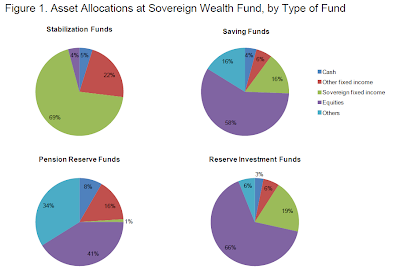 “In practice, there is a wide variety of legal frameworks for SWFs. This partly reflects the fact that different countries have chosen different legal forms for these funds. Generally, SWFs are established (i) as separate legal entities under law with legal identities and full capacity to act; (ii) take the form of state-owned corporations also with distinct legal persona; or (iii) as a pool of assets owned by the state or the central bank, without a separate legal identity.”
The manager model‖ and the investment company model‖ are the two dominant forms of institutional setup for SWFs…In the manager model the legal owner of the pool of assets constituting the SWF (usually the ministry of finance) gives an investment mandate to an asset manager… In the investment company model, the government as owner sets up an investment company that in turn owns the assets of the fund. This model is typically employed when the investment strategy implies more concentrated investments and active ownership in individual companies (Temasek, Singapore), or the fund has a development objective in addition to a financial return objective. 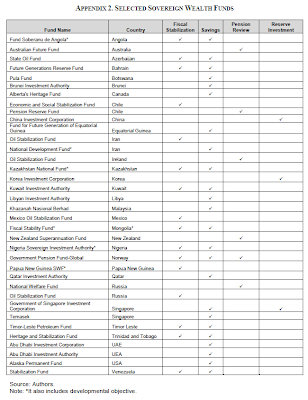